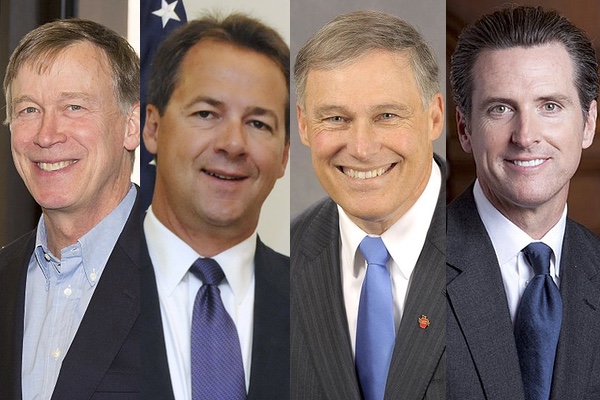 As the 2020 presidential campaign commences now that the midterm elections of 2018 are over, four governors from western states may decide to compete for the Democratic nomination, and could play a major role. One is leaving office and has given evidence of interest in running; two others are still in office and have gained notice for their skills as governors; and one is about to enter office with at least long range presidential ambitions. Having a western governor in the White House would be nearly unique, as only California Governor Ronald Reagan ever achieved the presidency, coming from a western state. But this time, it could be a Democrat from the west in the White House.

John Hickenlooper of Colorado is finishing eight years as chief executive of the Rocky Mountain state, and had previously been the mayor of Denver from 2002-2011. Hickenlooper was judged one of the five best mayors in America by Time Magazine in 2005, and resolved the city’s financial crisis. He won a second term by a massive margin, and succeeded in bringing the Democratic National Convention to Denver in 2008.

Hickenlooper served as chairman of the National Governor’s Association in 2014 and 2015, and gained such a good reputation that he was rumored to be part of a future bipartisan unity ticket with Republican Governor John Kasich of Ohio, although neither governor ever confirmed such a plan. As governor, he has promoted a ten-year plan against homelessness, advanced economic growth, opposed capital punishment, and backed disaster relief for victims of record setting floods and wildfires that devastated Colorado. While skeptical originally about cannabis legalization, he has gone along with the voters who decided to legalize weed. His record as a governor has drawn him positive national attention, so the odds are good that he will announce his candidacy in the coming months.

Steve Bullock has been the governor of Montana since 2013, after having served four years as Montana Attorney General. He has been the chairman of the National Governor’s Association this year. He has been rated the most effective governor in the nation. He is known for environmental initiatives, measures to promote economic growth, friendly relations with labor, and cutting property taxes. He was reelected to a second term on the heels of his high poll numbers, but has had to face a Republican controlled legislature.

Bullock has supported abortion rights, campaign finance reform, marriage equality, net neutrality, and organized labor. Despite his liberal views, he was able to win reelection at the same time that Donald Trump was elected president. He has argued for the need of the Democratic Party to move beyond urban centers, and work to gain the support of suburban and rural voters, as he has been able to do in his state. He traveled to Iowa and New Hampshire in 2018, evidencing interest in a possible presidential run. Most political observers expect him to enter the race in the next few months.

Jay Inslee has been the governor of Washington since 2013, after serving seven terms in the US House of Representatives before becoming Governor. Inslee is a strong critic of the Trump presidency. He opposed the executive order banning travel from seven Muslim nations and denounced a separate order banning Syrian refugees. In his years in Congress Inslee, a conservationist, advocated action against global warming. He backed the passage of the Affordable Care Act under President Barack Obama. He was under consideration to be Secretary of the Interior or Secretary of Energy in the transition period of the Obama presidency.

As governor Inslee ended capital punishment, promoted the expansion of education aid, addressed mental health needs, and raised worker pay for state employees. In 2017 he was elected the chairman of the Democratic Governors Association, just in time for the 2018 elections. He had good timing. The Democrats gained seven governorships in November. He won reelection in 2016, despite the Republican Party’s takeover of the federal government. Rumors have spread that he is seriously considering a presidential bid in the next few months. One reason is his strong criticism of President Trump.

Finally, the new California governor, Gavin Newsom, is seen as a possible presidential contender in the future, more likely in 2024. He has served as Jerry Brown’s lieutenant governor for two terms since 2011. Previously he was the much heralded mayor of San Francisco from 2004-2011. He became controversial for his advocacy of major programs to help the homeless in San Francisco, and gained national attention for being the first public official to promote and actually preside at gay marriage ceremonies in 2004. He also promoted the concept of sanctuary cities to provide support for undocumented immigrants. He refused to cooperate with agents from the Immigration and Customs Enforcement Agency (ICE).

As lieutenant governor Newsom promoted the expansion of technology in government, greatly expanded educational aid, supported cannabis legalization, and advocated the end of the death penalty. He is regarded by many as a “rock star” celebrity politician.

It seems a certainty that at least two, and possibly all four of these western governors will bring attention to the Mountain West and the Pacific Coast, which have never played a major role in Democratic politics. Expect these four governors to be part of the political battles in 2020 and beyond.