Which Presidents – If Any – Did Right by Native Americans? 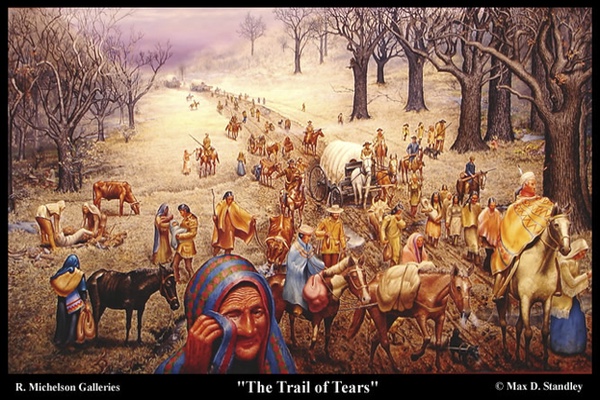 On the second Monday of October various cities and states celebrate Indigenous Peoples' Day. Some locales do so along with Columbus Day, others instead of honoring a man who began the conquest of America’s Indians. Thus, it seems an appropriate occasion to ask whether in ranking our forty-five presidents we are mindful enough of their policies toward Native Americans.

Although George Washington has consistently been ranked the second or third best of our presidents by both historians and the general public, we read in Colin Calloway’s new book The Indian World of George Washington: “Washington . . . developed and articulated policies designed to divest Indians of their cultures as well as their lands and that would shape US-Indian relations for more than a century. . . . He found little to admire in Indian life. . . . . When he looked at Indian people, he saw either actual or potential enemies or allies.”

Even though Ron Chernow’s acclaimed biography of Washington contextualizes our first president’s view of Native Americans, it still states that “by March 1779 Washington had steeled himself to act ruthlessly against the Six [Iroquois] Nations and resort to cold-blooded warfare against civilians as well as warriors.” Chernow also recognizes that as president, “his most flagrant failings remained those of the country as a whole—the inability to deal forthrightly with the injustice of slavery or to figure out an equitable solution in the ongoing clashes with Native Americans.”

What Chernow says about Washington’s failures regarding Native Americans could also be said of our number-one ranked president, Abraham Lincoln. As an article in the Washington Monthly, “Lincoln: No Hero to Native Americans,” put it in 2013: “Abraham Lincoln is not seen as much of a hero at all among many American Indian tribes and Native peoples of the United States, as the majority of his policies proved to be detrimental to them.”

In his essay “The Indian Policy of Abraham Lincoln,” historian W. Dale Mason wrote, “President Lincoln … continued the policy of all previous presidents of viewing Indian as wards of the government. . . . He made no revolutionary change in Indian-white relations.” More recently, historian Douglas Brinkley has observed that Lincoln “exhibited much the same insensitivity” toward Native Americans as did other government officials of his day.

Brinkley has also written long books dealing with the conservation policies of two other presidents who are consistently ranked in our top five—Theodore Roosevelt (TR) and his distant cousin Franklin Delano Roosevelt (FDR). In these works, Brinkley often touches on the two presidents evolving views and policies regarding Native Americans.

Although the historian does not quote TR’s infamous 1886 words—“I don't go so far as to think that the only good Indian is the dead Indian, but I believe nine out of every ten are, and I shouldn't like to inquire too closely into the case of the tenth”—he does indicate that TR’s views evolved in a more positive direction. Nevertheless, TR still spoke favorably of the 1887 Dawes General Allotment, which divided some communal lands among individual Indians and opened other acreage to white settlers. By 1900, the Indians had lost more than half of their previous lands.

In his first Annual Message as president in December 1901, TR praised the act, stating that “the General Allotment Act is a mighty pulverizing engine to break up the tribal mass. . . . We should now break up the tribal funds, doing for them what allotment does for the tribal lands; that is, they should be divided into individual holdings.”

In Brinkley’s words, the problem was that TR “consistently saw the Indians’ future in North America in stark Darwinian terms.” He quotes a TR pre-presidential statement: “We must turn them loose, hardening our hearts to the fact that many will sink, exactly as many will swim.”

In American Indians/American Presidents: A History, a valuable 2007 book, Clifford Trafzer, the editor, indicates that TR and his successors up until Herbert Hoover not only favored the Dawes Act but also assimilation.

To improve Native American conditions, FDR relied especially on two men who had earlier demonstrated their Indian sympathies, John Collier (who became Commissioner of the Bureau of Indian Affairs) and Harold Ickes (named Secretary of Interior). Collier had previously founded and headed the Indian Defense Association, and Ickes and his wife, Anna, had been “longtime crusaders for Native American rights.”

Despite remarking upon some Native American opposition to FDR’s Indian policies, Brinkley indicates that they were generally well received, and, “No other president had ever helped Native Americans prosper with the heartfelt conviction of FDR. The New Deal encouraged Indian self-rule, the restoration of tribal government, and the resuscitation of native culture and religion. But this wasn’t government paternalism or welfare.” Native Americans helped pull “themselves up by the bootstraps.”

Despite some caveats, most other historians have also praised FDR’s Indian policies. For example, my 2008 copy of The American Journey, authored by seven historians, notes that “Native Americans also benefitted from the New Deal.” And it provides an excerpt from a 1938 report of Collier’s which stated, “For nearly 300 years white Americans, in our zeal to carve out a nation made to order, have dealt with the Indians on the erroneous, yet tragic, assumption that the Indians were a dying race—to be liquidated. We took away their best lands; broke treaties, promises; tossed them the most nearly worthless scraps of a continent that had once been wholly theirs.”

No other highly ranked president has a better record toward Native Americans than FDR. Thomas Jefferson, usually ranked as our fifth to seventh best president, is often criticized for the “awful precedent” he set regarding “federal policy on Indian removal” (see also Jefferson and the Indians: The Tragic Fate of the First Americans).

Presidents Harry Truman and Dwight Eisenhower, both usually ranked in the top ten, also receive lower estimations for their policies toward Native Americans. Trafzer, for example, writes that the two presidents, although favoring full citizenship for Indians, “pursueda policy of termination, which aimed at destroying the tribes' legal relationship with the United States and divesting Indians of their lands.” According to two other scholars, “Termination was a failure and was abandoned in the early 1970s. Native Americans refused to give up their culture, land, or sovereignty.”

How about our other presidents? Do any of them have commendable records in regard to Native Americans? Two who are usually ranked somewhere between tenth and fifteenth (Lyndon Johnson and Barack Obama) and one who is ranked considerably lower (Richard Nixon) are often mentioned. American Indians/American Presidents, for example, states that Johnson and Nixon “developed some of the most comprehensive and innovative Indian policy statements” in U.S. history.

In March 1968, Johnson sent an important message to Congress in which he drew attention to the Indian woes of the time, including high unemployment and death rates. He then stated, “No enlightened Nation, no responsible government, no progressive people can sit idly by and permit this shocking situation to continue.” He proposed ending the termination policy and stressed Indian self-determination. The main way his policies helped Native Americans was through his “Great Society” reforms. As a main web site sympathetic to Indian concerns, Indian Country Today, states, “as economically disadvantaged people, Indians benefited” from his reforms.

This same web site, in addition to featuring essays on each of our first 44 presidents’ attitudes toward Native Americans, posted a 2012 piece by a Native American entitled “Barack Obama and Richard Nixon Among Best Presidents for Indian Country.” It credited Nixon with “changing course on many of the policies that had driven so many Indians into bleak poverty”; with ending some assimilationist policies; and with encouraging the growth of tribal governments. Although the 1975 Indian Self-Determination and Educational Assistance Act came after Nixon’s resignation, it owed much to his earlier efforts on behalf of Native Americans.

In regard to Obama, the site noted that during his first term he improved Indian health care, “institutionalized an annual White House Tribal Nations summit,” and hired “several Indians to posts throughout his administration.” Four years later in 2016, a New York Times editorial declared that “Candidate Obama Kept His Promise to Native Americans.”  It stated that tribal leaders credited him with helping to settle Indian claims against the government worth billions of dollars, “creating a White House council to maintain lines of communication with them; establishing a buyback program to help tribes regain scattered lands; expanding the jurisdiction of tribal courts; and including tribal women under the protection of the Violence Against Women law in 2013.”

The Indian efforts of twentieth–century presidents such as FDR, Johnson, Nixon, and Obama owed debts to outside influences, especially Native American activism. According to one Indian source, the Brookings Institute 1928 Meriam Report, for example, “set the stage for a new era in Indian policy.” As such, it paved the way for FDR’s 1934 Indian Reorganization Act. The civil rights activities of the 1960s, the 1970 publication of Dee Brown’s Bury My Heart at Wounded Knee: An Indian History of the American West, and the 1973 Indian occupation of Wounded Knee, South Dakota were just a few of the happenings that helped change U.S. Native American policies.

Such outside influences and an era’s mentality are certainly relevant when evaluating the Indian policies of presidents. Because of that we should not expect a Washington or Lincoln to champion measures that reflect today’s thinking. But if those actions had been wiser we would think even more highly of the two presidents.

This essay is also not suggesting that because a president like Nixon pushed for Indian policies that were more enlightened than say those of Theodore Roosevelt that the former should be ranked higher. No, there are too many other Nixon negatives.

But Indian policies should at least influence our rankings. Take the case of President Andrew Jackson, where a greater recent awareness of such policies seems to have had an effect. In a 2016 interview, Douglas Brinkley noted that Arthur Schlesinger Jr.’s Age of Jackson (1946) all but ignored Jackson’s policy of forcing Indians to migrate to reservations west of the Mississippi River. When many years later Brinkley asked Schlesinger why he overlooked such an important matter, he replied that he was embarrassed about it but when he was growing up he and many others “didn’t think of Native Americans as people-people.”

Like Schlesinger Jr., his father was a historian, and both men conducted presidential ranking polls. The father in 1948 and in 1962, when he surveyed 75 historians; the son in 1996, when a smaller number of scholars were polled. In those three polls, Jackson was ranked 5th or 6th. But a 2017 poll, conducted by C-Span of 91 presidential historians, ranked Jackson only 18th. Despite President Trump’s great admiration for Jackson, the downgrade seems warranted.