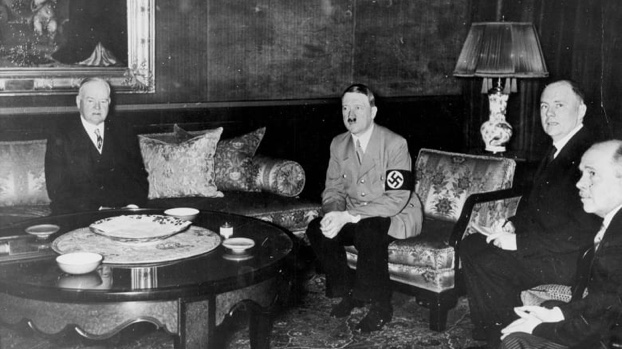 [Shaking] dictators' bloodied hands is very presidential behaviour. Every modern American commander-in-chief, from Franklin Roosevelt to Barack Obama, has gripped-and-grinned for the cameras with cruel authoritarians. Other presidents may have studied up more for their summits - "I don't think I have to prepare very much," Trump said Thursday, explaining, "It's about the attitude" - yet the results have ranged from debacles to breakthroughs….

Five years after his presidency, Herbert Hoover toured Europe, mostly to pick up awards for his can-do humanitarian effort to feed the war-ravaged continent in the 1920s. In Berlin, Hoover had a 40-minute chat with Adolph Hitler at the Reich Chancellery in March 1938, then dined with Nazi minister Hermann Goring at his hunting lodge. In his conversation with Hitler, Hoover spoke up for personal liberty. The Fuhrer replied that Germany, unlike resource-rich America, could not afford such liberties.

Back home, Hoover denounced the Nazis' "disregard for both life and justice", but he argued the United States should stay out of European conflicts with Germany. He thought Hitler posed a bigger threat to Joseph Stalin's Soviet Union than the West.