The GOP President Historians Say They Like More and More 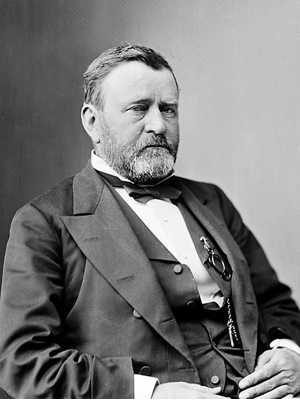 At a time when we have the controversies surrounding Donald Trump in the White House, we have seen in the past few years the dramatic rise of the 18th President of the United States, Ulysses S. Grant, in rankings of polls of scholars in history and political science.

When this blogger and author was in college a half century ago, and even until the last decade, Grant was ranked as a failure, a disastrous Chief Executive, who had presided over the most corrupt administration in American history before the 20th century. Grant was seen as having ushered in the Gilded Age of the late 19th century, with its attendant corruption and malfeasance, and as a man totally inept as President, who brought us into the terrible Panic of 1873, had been a heavy drinker, our second alcoholic President after Franklin Pierce, and had often been clueless as to what was going on within his Cabinet and other close advisers in many agencies of the federal government.

While it was acknowledged that Grant had been a great Civil War General, who had gained the surrender of Robert E. Lee at Appomattox Court House in Virginia, it was also accepted that Lee actually was a far better military leader, despite his having served in a losing cause. Grant’s reputation was in tatters as a President, just above James Buchanan, Andrew Johnson, Franklin Pierce, Warren G. Harding, John Tyler, Millard Fillmore, and Herbert Hoover, and in some rankings, actually below some of these Presidents.

In 2000, a C Span poll of Presidential scholars ranked Grant number 33 out of 41. But in 2009, a similar poll saw Grant shoot up ten points to number 23 out of 42, an astounding rise. Then, in 2017, Grant rose to number 22 out of 43. And in 2018, the Presidents and Executive Politics Presidential Greatness Survey of the American Political Science Association saw Grant rise to number 21, ahead of such Presidents as Grover Cleveland, Gerald Ford, Jimmy Carter, and Richard Nixon, and close behind William McKinley and James K. Polk, an astounding development.

In the most recent survey, Grant was ranked 27th by self-defined conservatives and 25th by self-defined Republicans, while Moderates and Independents ranked him 22nd. More astounding was that self-defined Liberals and Democrats both ranked him 19th. So it was the latter two groups which assisted Grant’s rise to number 21, something no historian or political scientist would have ever thought possible in the past half century. Who would think that a flawed Republican President of the Gilded Age would be ranked higher than any post Civil War President with the exception of William McKinley.

Recent scholarship on Grant has greatly contributed to his rehabilitation, emphasizing his open minded and tolerant views on racial matters. While massive corruption was common during his presidency and the economy was often perilous, writers have given him high marks for his efforts on behalf of African Americans and Native Americans. And probably his Civil War leadership has also had an effect on his ranking as we recently commemorated the 150th anniversary of the Civil War.

This all demonstrates how the ranking, image, and popularity of Presidents are often in flux, affected by changing times and issues. So it makes one wonder if in the future, we will see a revival of the image and ranking of other Presidents who languish in the lower depths of Presidential reputations, including Richard Nixon, Jimmy Carter, Gerald Ford, and George W. Bush. We have already seen the rise in rankings of such Presidents as Harry Truman, Dwight D. Eisenhower, and Lyndon B. Johnson, all who suffered in reputation after leaving office, but have reached the top ten listings in recent polls.

One final thought: the odds of Nixon, Carter, Ford, or George W. Bush reaching the lofty heights of Truman, Ike, or LBJ are clearly highly unlikely. But their rankings could move up substantially over time as we add more Presidents to the list, and as we see that past leadership, at least in our eyes, as better than present or future expectations.