We Could Afford to Help Feed Children Around the World After WW2, but Not Now?

William Lambers is an author who partnered with the UN World Food Program on the book Ending World Hunger. He has been published by the NY Times, HuffPost, the Hill, Buffalo News and many other media outlets. 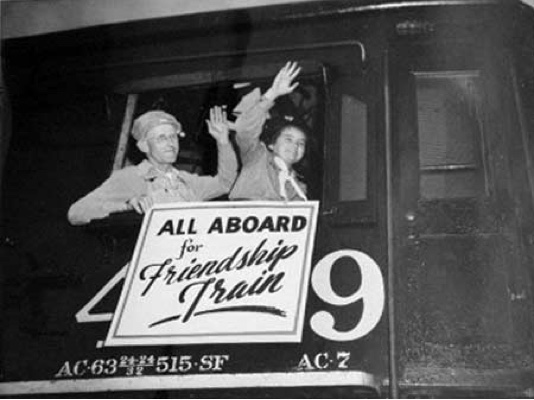 If the Grinch who stole Christmas were president of the United States, you might expect him to take food away from hungry children. You would not expect the real president to do that.

But sadly that is exactly what President Trump tried to do earlier this year in his budget proposal for FY18. Trump called for the complete elimination of the McGovern-Dole school meals program, which feeds hungry children overseas.

This was like the Grinch Who Stole School Meals.   It was a cruel and inhumane proposal that left many in disbelief.  The American people, working with Congress, can override that horrible idea. We should not only save the McGovern-Dole program but think bigger.

We can give children around the world a gift that would last them year round by expanding our overseas school lunch program. It's not only a humanitarian gesture, but it's smart foreign policy. The holiday season can inspire us, as it has done in the past.

Right before Christmas of 1947 President Harry Truman signed into law an interim food aid program to fight hunger in Europe. This was a critical piece of legislation that Truman and Secretary of State George Marshall had pressed for that fall.

The food would bring stability to Europe as it tried to rebuild from the ashes of World War II. This was an essential prerequisite for reconstruction. Part of the interim aid program provided over one million children in Italy with school meals.

Also before Christmas of 1947 food donated by American citizens, via the Friendship Train, arrived in France. This would mean weeks of school meals for hundreds of thousands of hungry children in Paris. It was the Christmas gift that kept on giving.

At the same time the United States was also feeding school meals to millions of children in Germany.  In Austria, Catholic Relief Services was supplying a school lunch program being run by the United States Army.

All these feeding programs were part of the lead up to the Marshall Plan of 1948, which ultimately rebuilt Europe. In fact the interim aid program was specifically crafted to allow people in Italy, France and Austria "to eat, to work, and to survive the winter" before the Marshall Plan took effect.

Clearly one of America's greatest international achievements was the Marshall Plan, and school meals were a part of this foreign policy treasure.

That brings us back to today and the McGovern-Dole global school lunch program. The plan was named after former Senators George McGovern and Bob Dole, both WWII veterans who witnessed the Marshall Plan era.

Run by the U.S. Department of Agriculture (USDA), McGovern-Dole currently receives about $200 million a year in funding.  The UN World Food Program, Catholic Relief Services, Save the Children, Mercy Corps and others use that funding to provide school meals in poor countries.

McGovern-Dole represents a very tiny part of the U.S. federal budget. To put in perspective nuclear weapons spending reaches at least $20 billion a year, with some estimates even much higher.

When you see such massive spending like that, it would certainly seem reasonable to expand McGovern-Dole funding to at least $300 million a year. If that happened, we could reach more children in impoverished countries with school meals.

The current program feeds children in Haiti, Mali, Ethiopia, Laos, Guatemala and other nations. Where applied the results have been good. Jessica Garrels of Catholic Relief Services in Laos recently described how hunger rates dropped and class attendance went up because of the McGovern-Dole school meals.

But so many more children need the school meals. Food at school is a major source of stability for a family, community and a nation. The plan should be to feed as many children as possible, and help build national school lunch programs.

Every nation needs a school lunch program to ensure nourished and educated children.

Now the Grinch who stole Christmas did finally change his ways at the end of the story. Certainly President Trump could as well and start supporting meals for children.

A humanitarian foreign policy is when America is at its greatest as the Marshall Plan demonstrated. We want our President to reflect those ideals.

As the holidays arrive, we should be thinking about a year round gift for the hungry children of the world. A simple school meal can change for better the lives of millions of children. This is a precious gift we should keep on giving.