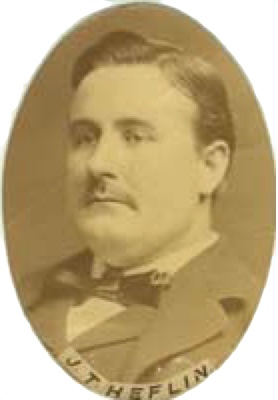 If a majority of voters in Alabama’s upcoming election for Senate vote for an accused child molesting, theocratic, twice disgraced and ousted judge Roy Moore he will have a strong rival for the title of worst senator ever from the state in post-Civil War era. The current holder of that dubious title for the moment remains Thomas Heflin, who was Alabama’s senator from 1920 to 1930.

Heflin, nicknamed “Cotton Tom,” began his political career inching his way up the ladder first as the mayor of La Fayette followed by two terms in the state house of representatives. As a delegate to the state constitutional convention in 1901 Heflin pushed segregation and Jim Crow into law. He was elected the secretary of state but left midway through his term to run for Congress.

In Washington Heflin was a strange mix of a few progressive views on labor combined with extreme racism and anti-Catholicism. He was a vocal opponent of woman’s suffrage taunting a fellow senator who favored giving women the vote to put on a dress and bonnet, but he was the sponsor of the bill to create Mother’s Day in 1914. The same year he made baseless accusations against another representative for taking payoffs from the Germans.

Riding a streetcar in DC in 1908 with another congressman from South Carolina Heflin saw a black man, Louis Lundy, sitting next to a white woman and drinking whiskey. Heflin threw him off the streetcar onto a crowded platform. What happened next is unclear but the congressman pulled out the pistol he always carried and shot Lundy, grazing him on the neck. Another shot ricocheted and struck a bystander, Thomas McCreary, on the leg. Heflin claimed that Lindy was reaching for a razor when he shot him.

Heflin was arrested on charges of assault with intent to kill. At the police station Heflin answered every question by saying “I’m a Democrat.” Released on $5,000 bail, Heflin was indicted on three counts. "Under the circumstances there was nothing more for me to do," Heflin was quoted as saying. "I am glad to say I have not yet reached the point where I will see a Negro, or a white man either, take a drink in the presence of a lady without saying something to him. I did only what any other gentleman placed in similar circumstances would have done." Telegrams of support poured in but, as recently happened following the reports of Roy Moore’s molestation activities that got him banned from a mall, not every newspaper in Alabama applauded Heflin’s actions.

After Lundy failed to show up for the trial the case was dropped. Heflin did pay McCreary’s medical expenses for the six weeks he spent recovering in a hospital. Heflin wore the incident as a badge of honor, featuring it in his campaigns.

As happened this year, there was a vacancy for one of Alabama’s senate seats in 1920. Heflin won the election and later won re-election. In the Senate Heflin dressed flamboyantly and made notably eccentric speeches. He waged a war against Catholics at one point. claiming the Bureau of Engraving had added a rosary to George Washington’s portrait on the dollar bill and attacking the White House for hanging cardinal red drapes, supposedly part of a plot by the Vatican.

His hatred for Catholics came to a head in 1928 when Al Smith won the Democratic nomination for president, the first Catholic to lead a major party. “The climax of this move is Al Smith’s candidacy for President,” Heflin said on the floor of the Senate. “Wake up, Americans! Gird your loins for political battle, the like of which you here not seen in all the tide of time in this country. Get ready for this battle. The Roman Catholics of every country on the earth are backing his campaign. Already they are spending money in the South buying up newspapers, seeking to control the vehicles that carry the news to the people. They are sending writers down there from New York and other places to misrepresent and slander our State, all this to build a foundation on which to work for Al Smith for President. The Roman Catholic edict has gone forth in secret articles, ‘Al Smith is to be made President.’ ” Heflin broke with the party and endorsed Republican Herbert Hoover.

In 1930 Democrats in Alabama took revenge by supporting John H. Bankhead II who defeated Heflin by 50,000 votes. After his defeat Heflin charged that the election was rigged and challenged it in the Senate. The Alabama House of Representatives reacted with a resolution declaring Heflin "made Alabama the laughing stock of the Union by his bigotry, lack of religious tolerance, and the lack of many of the courtesies generally expected between one gentleman and another." The Senate conducted an investigation that dragged on for two years, costing $100,000 or millions in today’s money. Heflin was allowed to speak before the final vote. He raged for five hours but the senators rejected the charges by a 64 to 18 vote. For the remainder of his life Heflin tried for a comeback losing election after election. He was granted appointment to several minor federal posts by FDR. In the 1948 election he denounced the ‘Dixiecrat’ challenge from Strom Thurmond. As a former senator he had the privilege of entering the chamber and he often exercised it sitting in the back quietly listening. As he sank into dementia he tried to board a DC bound bus in Alabama dressed in a bathrobe. Heflin died in 1951. His nephew later took his old seat in the Senate.