The Coal Industry Killed My Book

Greg Bailey is the author of the not so quite forthcoming “The Herrin Massacre.” 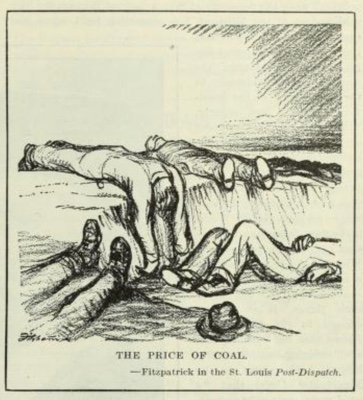 HNN Editor:  We invited the editor who rejected Greg Bailey's manuscript to provide a response to this article.  The response follows the article.

My eyes were wide open when I submitted my book The Herrin Massacre to the Southern Illinois University Press in Carbondale. The book covers a mostly forgotten event in 1922 when twenty-three people, most of them strikebreakers, were murdered by union miners after a mine attempted to operate during a national mining strike. But the story of the massacre is more than a body count. What sets it apart is that as things should have been cooling off the intensity of violence increased, culminating in the brutal torture and murder of six strikebreakers before a cheering crowd of perhaps 3,000 townspeople. Afterwards the bodies were put on public display, where they were desecrated by locals who brought their children in to help.

Because Herrin is just a few miles from Carbondale I was worried there would be pressure to kill the book or whitewash what happened. After all, who wants to confront the reality that their grandfather murdered more people than Charles Manson and in a more brutal manner?

But the book was about more than the violence. I wrote about the history of coal and coal mining from its earliest days to its heyday and now about its decline and eventual demise.

Without coal, I wrote, the Industrial Revolution would only have been a theory and coal played a vital role in history. I also wrote about the downside of coal, the vast numbers killed in mine accidents, the Black Lung, the environmental costs and the many violent clashes it fueled including the Herrin Massacre.

I went along with the suggestions of the editor, toning down references to Trump policies about coal, adding footnotes, and spending out of my own pocket a great deal of money for three maps. Everything seemed fine until an editor suddenly announced the book had been killed. The reason, she wrote, was because of my “disparaging and biased remarks about coal.” Southern Illinois, she wrote, is “coal country” and that “Carbondale is a little blue bubble in this predominately red region of unions and laborers, and coal-bashing would kill sales.” This was a shock to me. I had certainly heard of political correctness but it was the first time I ran into “coal correctness.”

The source of this allegation came from a review of the manuscript by the past president of the Illinois Coal Association. The reviewer wrote that I had “extreme contempt for the coal industry.” I failed, he wrote, to have “a single word of approbation of anything having to do with coal mining.” Further, he wrote, I viewed coal mining as “the greatest evil in the history of the world,” citing a few examples to support the allegation.

I do not hate coal any more than people hated wooden sailing ships when steam powered vessels came along or any more than people hated horses when Henry Ford made affordable cars. Coal was an important part of history but it is coming to an end. It has already ended in the United Kingdom and it is declining rapidly in America. There is only one operating coal mine in the Herrin area, down from the dozens that once dotted the countryside. The cruel lie of the Trump administration that the so-called war on coal is over and miners will get their good paying jobs back is as foolish as it is cynical. Coal is losing to natural gas and renewable energy, a decision not forced by activists rallying in parks but by men in Armani suits in Wall Street board rooms. The age of coal is coming to an end, the propaganda of the past president of the Illinois Coal Association notwithstanding.

A second reviewer, an anonymous professor, objected on the grounds that the book was not scholarly which it never was intended to be. From the first it was understood it would be a book for general readers, not professors. My alleged hatred of coal was the sole  reason cited for the cancellation.

I will continue to try to get the book published, perhaps successfully perhaps not. But I will not be censored or suppressed by the coal industry without a fight. If any writer is endangered by pressure from an industry the integrity of our profession is in danger.

The coal industry did not kill Mr. Bailey’s book, I did after the peer review process when I received one very negative report and one mediocre report.  Far from denying the events in Herrin, Southern Illinois University (SIU) Press wants to publish an account of the Herrin massacre, which is why we worked on this project with Mr. Bailey for nearly two years. The standard bearer on this topic has been Bloody Williamson by Paul Angle, published in 1952, and we were hoping for a book that elaborated on the massacre and provided new information that Angle may not have found or used.  When we agreed to an advance contract for the book, it was with the understanding that it be well documented so future researchers could locate the source material and the author would be safe from charges of fabrication.

While the Herrin massacre occurred due to coal and labor issues, we did not expect the book to be an account of the history or the author’s views on coal and coal mining.  As Bailey mentions, the first reviewer wrote, “The author makes it clear that he views coal mining as the greatest evil in the history of the world.” But the reviewer continued: “And that is his right. However, he is given to overkill and hyperbole lacking any semblance of balance in enunciating his disdain for coal. More than that, his attack contains inaccuracies.”

The second reviewer wrote, “The story of the massacre is coherently presented and adds a few details not included in Angle's account. … The author stumbles badly, however, in his effort to establish context for the massacre. The manuscript is filled with glancing and superficial mention of subjects with no apparent connection with the massacre itself, with occasional snide innuendo, and with glib assertions that cry out for explanation or documentation but receive neither.” This statement and other comments from the reviewer about inadequate documentation cinched my decision.

Southern Illinois is coal country, but we at SIU Press are neither pro- nor anti-coal.  We have published books about the negative effects of coal on our region as well as about the people involved in coal mining. As I told Mr. Bailey, it is possible to write about coal without bias, and I think he could have rewritten those sections. However, given the other serious problems with the manuscript, I did not envision Mr. Bailey transforming the manuscript into a publishable book. And that, not coal, is what killed his book.

From the very beginning I told them the book was intended for a general history reading audience. It was not and was never intended to be a scholarly book. Paul Angle's book Bloody Williamson was written the same way. On one hand the professor objects that I did not put the Massacre in context which in his or her world means a lot of pretentious posturing about post-industrial paradigms or some other such nonsense. I did however put the Massacre in the context of the history of coal, the reason why good people committed mass murder before cheering crowds. They did it to secure their future employment as coal miners, a future that has now all but disappeared.The second great tragedy of the Massacre after the killings was that it was all for nothing. In writing about this event I did put the times and the place in context for general readers and try to make it interesting. For example, I wrote that during the first trial one of the court clerks began dressing up like Rudolph Valentino which the nameless professor attacks as am aside or a snide comment. I'm trying to recreate a time and place inside readers' minds not impress some professor.

But really these objections are after the fact. Martin in her rejection email only cited my alleged "coal bashing" because it would hurt sales in "coal country." That's why after more than two years they suddenly rejected it. If I wrote a bad book then fine. But they never had any objections to those chapters concerning coal mining until the Illinois Coal Association made wild and inaccurate charges against me for hating coal. This is wrong. This is the worst kind of interference in publishing especially at an institution claiming academic integrity. if I written a book about a plane crash should the publisher let an executive at Boeing review it and object that it might disparage aviation?  If I write about the KKK should David Duke be consulted for his views? I do not, in fact, hate coal. I don't love it, but I don't hate it either. I don't know or care about Martin's background, but my family is from southern Illinois and some of them were miners. We know coal always was a mixed blessing.  One of my earliest memories is watching the coal burning furnace in my grandparents' living room. When they were able to get a gas fired unit, they got the hell rid of it and stopped burning coal. Unfortunately there are a few people including one editor at SIU Press who can't let go.

One last point and then I'll shut up. Paul Angle's book is a classic. But my telling of the Massacre is at least ten times longer with hundreds of new details. To say I did nothing more than copy his book is like Trump claiming the largest crowd in history for his inaugural when the plain numbers do not support  it. Facts are a hard thing to deny or at least should be.

If this had been your book would you think this was right?