Should We Be Worried About Trump’s Brain? 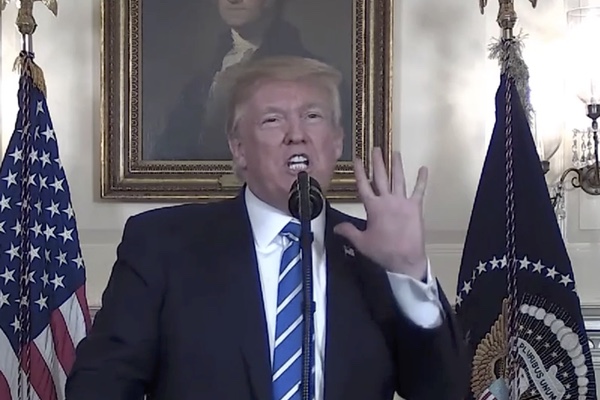 As Donald Trump nears the end of his first year in the Presidency, alarm is growing over what many observers see as his mental instability, and the fear that he might use nuclear weapons against North Korea.

The President’s public behavior in speeches and on Twitter and his reported private behavior of fury and temperamental displays alarms many, and has led to a hearing of the Senate Foreign Relations Committee, headed by Trump critic Senator Bob Corker of Tennessee, into the question of whether the President’s authority to use nuclear weapons could be limited. As the situation now stands, and has since the first use of atomic bombs on Hiroshima and Nagasaki in 1945 by President Harry Truman, there is no one who could stop Trump if he chose to use the nuclear codes, not even his Secretary of State Rex Tillerson nor his Secretary of Defense James Mattis.

This issue of the perceived mental instability of Donald Trump leads us to explore the issue of past mental instability of our chief executives. It is clear that a large number of our past Presidents had mental issues that affected their performance in office, although none on the level of the potential danger of Donald Trump. It is a dangerous game to try to gauge whether past Presidents with mental problems might have affected the nation’s security and safety. But psychiatrists and psychologists have over the years weighed in on this matter nevertheless.

It seems accurate to say that Richard Nixon, an insecure man who displayed paranoid behavior toward his “enemies”  –  bugging and wiretapping, authorizing illegal break ins, creating an “enemies list”  –  was potentially dangerous. Critics worried during Watergate that he might declare martial law or use nuclear weapons. It became known that Nixon drank heavily during the most delicate moments leading to his impeachment by the House Judiciary Committee and the announcement of the decision of the Supreme Court forcing him to release key White House tapes. Many have said that this particularly tense time was the most dangerous constitutional crisis since the Civil War a century earlier.

Other than the danger of Richard Nixon, no other President posed as great a concern, but it is instructive to look at the mental behavior of other Presidents, who if fortune had been different, could have presented a crisis on the level of Richard Nixon or Donald Trump. The issue of generalized mental depression has been quite common in many Presidents, as we look back on their behavior in office, and also their lifetime mental states.

At the top of the list would be Abraham Lincoln, who clearly suffered bouts of depression, due to the stresses of the Civil War, and the loss of two of his sons as young children during his Presidency. Additionally, his tempestuous wife, Mary Todd Lincoln, made his private life extremely difficult in the midst of his public challenges. But Lincoln managed skillfully to overcome his mental disorder, and to lead the nation in a brilliant fashion at its most dangerous moment.

Two other Presidents also lost children during their times as President. One was Franklin Pierce, who lost his only surviving son in a train accident on the way to his inauguration in 1853. The accident led Pierce to become an alcoholic, which undermined his ability to do his job. He made many very poor, ill-informed decisions, such as signing the Kansas Nebraska Act in 1854, which helped lead the nation to the eventual Civil War seven years later. His wife, Jane Pierce, closed the shades of the White House and remained in depression for the entire four years of her husband’s Presidency.

The other was Calvin Coolidge, who lost his younger son and namesake in 1924 due to an infection on his toe which, left untreated, caused his death within a few days, plunging Coolidge into deep depression. In his first year in the White House Coolidge had been quite conversational and communicative with the press corps, something not recognized until recently. After his teenage son died, Coolidge changed. While never loquacious, he became withdrawn and depressed. Despite the loss, Coolidge was in the midst of a presidential campaign and continued his Presidency, but decided without explanation to announce in 1927 that he would not seek another term. He lived just another four years, dying at age sixty.

Other Presidents have been diagnosed in hindsight by experts in psychiatry and psychology with various serious ailments including bipolar disorder, which is suspected to have afflicted John Adams, Theodore Roosevelt, and Lyndon B. Johnson; all three displayed manic energy, and strong and vehement anger at their “enemies.” Social phobias, including a fear of crowds and public speaking, was shared by a number of Presidents including Calvin Coolidge, U.S. Grant, and Thomas Jefferson, who refused to speak before a joint session of Congress to deliver the State of the Union address.

Generalized depression, not caused by loss of children, also dogged several Presidents, including James Madison, John Quincy Adams, Rutherford B. Hayes, James A. Garfield, Woodrow Wilson, Herbert Hoover, and Dwight D. Eisenhower. And alcoholism was a major issue not only for Franklin Pierce, but also for Grant and George W. Bush. Both Nixon and Lyndon Johnson drank heavily at times.

Several Presidents had difficult life experiences that affected their mental states at times, without any specific diagnosis. Andrew Jackson displayed extremely violent behavior in gun duels and wartime military behavior, and it helped to contribute to his very tempestuous Presidency. Andrew Johnson was seen as acting inappropriately in public venues towards his critics, shocking many with his gestures and language. Both had suffered through difficult childhoods. Franklin D. Roosevelt suffered for years after contracting crippling Polio. John F. Kennedy had many secret health issues, which may explain his constant desire to prove his manhood and athletic ability, as well as his sexual exploits. Bill Clinton also had a difficult childhood, which may have made him become a supreme egotist unable to control his behavior towards women, which nearly led to his downfall, and continues to dog him in retirement, and undermined his wife, Hillary Clinton, in her pursuit of the Presidency.

Ronald Reagan is suspected of having succumbed to the early stages of dementia while President. Now Donald Trump is seen by some as having early dementia, and possibly bipolar disorder. Both diagnoses are, of course, unproven.

As one surveys the Presidency, certain Presidents stand out as having no major mental issues that affected them. This would include George Washington, James Monroe, Harry Truman, Gerald Ford, Jimmy Carter, George H. W. Bush, and Barack Obama. Considering the stresses and pressures of the position of President of the United States, it is good fortune that three of the five living former Presidents are in this category. But it does not relieve us of the concern and worry that we now have, without much debate, the most dangerous President in American history at the helm during a very difficult moment in international affairs.