William Lambers is an author who partnered with the UN World Food Program on the book Ending World Hunger. He writes on Huffington Post, the Hill and many other news outlets. 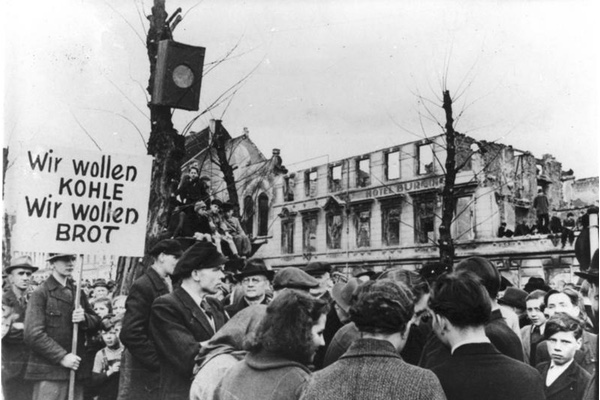 The hunger-winter of 1947, thousands protest against the disastrous food situation

Seventy years ago during Thanksgiving season, Americans were doing far more than planning turkey dinners. They were carrying out the nation's foreign policy. How they did it is a timeless tale that shows the true spirit of America.

Everybody loves trains, right? In November of 1947, Americans loved them so much they took one around the country, going city to city. They used this train to start exerting control over American foreign policy.

It was called the Friendship Train, and it collected food donations to be sent overseas to hungry people in Europe. World War II had ended just two years prior, and Europe was struggling with food shortages.

Feeding the hungry was the last mission of World War II, because famine was the remaining enemy even after the fighting had long ended.

The Friendship Train offered a way for everyday Americans to build peace through food. The American citizen could decide how much food to give. They were in control of this vital aspect of foreign policy: feeding the hungry.

Columnist Drew Pearson, who developed the Friendship Train idea, wrote: "For the first time in years, the American people have found a means of taking part in American foreign policy. Instead of sitting at home, with no way of expressing themselves other than writing letters to their Congressmen, the American people now have come to realize that food is a most important means of American foreign policy and that they can participate in it. In fact, food can be more important than tanks and guns, more constructive than the atomic bomb."

American families took part in the “silent guest” campaign, by making an extra place at the Thanksgiving dinner table for a hungry person in Europe or Asia.

To feed their imaginary visitor each family donated to the Silent Guest committee in Plymouth, Massachusetts. These donations led to thousands of CARE packages of food being sent to families in need overseas.

Now 70 years later Americans are welcoming the “silent guest” back into their homes.  The World Food Program USA and Kindworks are hosting a "silent guest" fundraiser to help South Sudan, one of four nations today threatened with famine.

As this Thanksgiving arrives there is a massive global hunger crisis.  There are four nations at risk of famine (South Sudan, Yemen, Nigeria, and Somalia). Millions of people will starve to death in these countries without food assistance.

The World Food Program, Catholic Relief Services, UNICEF, Save the Children, Mercy Corps and many others are on the frontlines of these emergencies. They need support in order to provide life-saving food.

In Yemen there are 17 million people (2/3 of the population) living in hunger because of a civil war. Children are perishing from malnutrition.

There must be a peace resolution, access for humanitarian aid deliveries and also funding. The World Food Program (WFP) needs these resources to feed millions of Yemenis. The UN food agency depends entirely on voluntary donations from governments and the public. There are other nations too in dire circumstances including war-torn Syria and Iraq. Drought has impacted Ethiopia and Kenya increasing hunger.

In the Democratic Republic of the Congo the WFP director, David Beasley, warns “As many as 250,000 children could starve in Kasai in the next few months unless enough nutritious food reaches them quickly. We need access to those children, and we need money – urgently.”

War, drought and poverty are displacing millions around the world and causing a desperate search for food.

But here on Thanksgiving Day many of us can enjoy a wonderful meal with an abundance of food. But why not share this good fortune with the hungry people of the world. You could donate to hunger fighting charities and feed “silent guests.”

Each family or organization can have their own “Friendship Train” to feed the hungry.

The actions we take today can determine the outcomes for people in hungry, conflict torn lands. Seventy years ago American generosity helped feed and win the peace in Europe, paving the way for the Marshall Plan, which ultimately rebuilt the continent.

We can continue this tradition of citizen led foreign policy, feeding the hungry during this Thanksgiving season.