Why Don’t We Celebrate Conscientious Objectors?

Jeremy Kuzmarov teaches at the University of Tulsa and is author of several books on U.S. foreign policy and essays from a newly developed peace history website that apply just war theory in assessing American wars. See his essay on the Korean War. 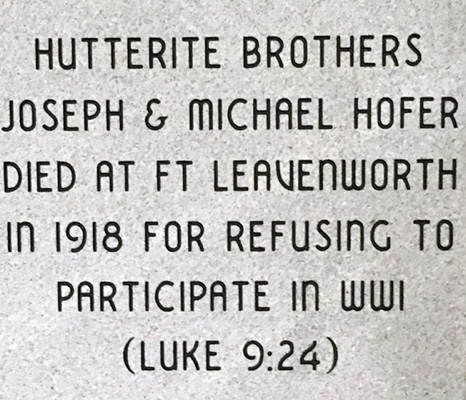 Well, now one war museum has.

Many museums throughout the world celebrate the men who fought wars but how many acclaim those who opposed them?

Well now the World War I museum in Kansas City has. It recently unveiled a plaque honoring two Hutterite conscientious objectors, Joseph and Michael Hofer, who died in late 1918 in Ft. Leavenworth military prison after having undergone weeks of torture in a dungeon at Alcatraz prison in San Francisco. The ceremony was part of a conference held at the museum on conscientious objectors, dissent and resistance to World War I sponsored by the peace history society and local community area churches.

The Hutterites are a Christian religious group who live communally and promote pacifism, believing that humans were not put on this earth to kill one another.

Many migrated from Russia after refusing conscription in the Czar’s army.

Based in South Dakota, Michael and Joseph were called to war on May 25, 1918 after the Woodrow Wilson administration had decided to send U.S. forces into the maelstrom in Europe.

In 1916, Wilson had campaigned on a platform of “he kept us out of war.” His change of face has been explained by historians as a product of Wilson’s grandiose plan to assert American power on the world stage and promote liberal principles. Others attribute the decision to economic interests led by J.P. Morgan, who had bankrolled the allied war effort and wanted a return on his investment.

Tens of thousands of Americans were killed or wounded and many came to regard the U.S. participation in the Great War as futile. The U.S. Senate failed to ratify membership in the League of Nations and the post-war settlement punished Germany and paved the way for the rise of Adolph Hitler.

As Duane Stoltzfus recounts in his book Pacifists in Chains: The Persecution of the Hutterites During the Great War (John Hopkins University Press, 2013), when they arrived at Ft. Lewis for basic training, Michael and Joseph and others from the Hutterite community were heckled because they were known as German speakers and pacifists. After their beards and hair was shaved in violation of their religious coda, the men refused to fill out their enlistment cards and were immediately charged with disobeying orders. At trial they said, their goal in life was not to fight in any war but to work on their farm for the poor and needy ones of the United States.

The Hofer brothers were among 504 conscientious objectors who were court-martialed during the Great War, resulting in 503 convictions and a single acquittal. One hundred forty-two of the men were believed to be Mennonite, Amish or Hutterite. Six of the Mennonites died at Ft. Leavenworth including four native sons of Oklahoma, at least one of whom was Amish.

At Alcatraz, the Hofer brothers found themselves with hardened and infamous criminals representing the “worst of the worst.” The facility was heralded as a progressive prison in promoting vocational training and housing a good library, though this progressivism did not apply to the conscientious objectors who were considered to be “slackers.”

The Hofers soon found themselves in solitary confinement in the “hole” where they received only a half glass of water each day and no food. Living day and night in darkness, they were chained to the bars in their respective doors, one hand crossed over the other. The chains were drawn up so only their toes touched the floor, a technique long familiar in the history of torture known as “high cuffing.” A guard would come by periodically to beat them on their arms and back, causing heavy swelling.

After arriving at Ft. Leavenworth, Michael and Joseph complained of sharp pains in their chests and soon afterwards their condition deteriorated. The Office of the Surgeon General listed pneumonia as the cause of death for both men, though the Hutterite Church concluded they had died in prison “as a result of cruel mistreatment by the United States military.” To add insult to injury, when Joseph’s wife, Maria, was taken to see her husband’s body, he had been dressed up in a military uniform.

The Hofer’s saga is of relevance today as a story of principled and courageous dissent and government oppression in a time of war. In the aftermath of their case, conscientious objectors gained more rights, though many were continuously imprisoned right up through the Vietnam War era. Their stories should be widely commemorated and told to provide a role model to younger generations and as an antidote to our militaristic culture that has led us into a state of permanent war.