John Reeves is the author of the forthcoming book The Lost Indictment of Robert E. Lee: the Forgotten Case Against an American Icon. It will be published by Rowman & Littlefield in May 2018. 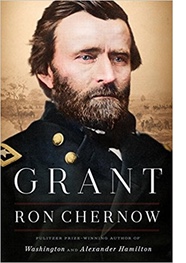 Man of mighty days – and equal to the days!
Thou from the prairies! – tangled and many-vein’d and hard
has been thy part,
To admiration has it been enacted!

The soldiers of the Army of the Potomac may not have felt like victors after the Battle of the Wilderness. For two days in early May 1864, they fought the Army of Northern Virginia to a bloody standstill on the most inhospitable of battlefields. Casualties were roughly 17,500 for the Union and 11,000 for the Confederacy.

The atrocious casualties didn’t fully capture the horror of two massive armies grappling in a tangled forest of underbrush and thickets. An aide to General Ulysses S. Grant described the hellish scene, “Forest fires raged; ammunition-trains exploded; the dead were roasted in the conflagration; the wounded roused by its hot breath, dragged themselves along with their torn and mangled limbs, in the mad energy of despair, to escape the ravages of the flames; and every bush seemed hung with shreds of blood-stained clothing. It was though Christian men had turned to fiends, and hell itself had usurped the place of earth.”

On the day after the battle, Union troops assumed they’d be retreating north. That’s what usually happened after such disastrous outcomes. This time was different, however. Instead of returning north, their new leader, General Grant, had them march to the southeast toward Spotsylvania Court House. When the soldiers realized they weren’t retreating, they cheered and began to sing. One observer noted, “The night march had become a triumphal procession for the new commander.” General William Tecumseh Sherman believed this move marked the grandest act of Grant’s life. Ron Chernow, in his new biography Grant, writes of the decision, “Grant hadn’t yet slain Lee, but he had done something as important – he had slain his specter.”

Chernow is wise to highlight Grant’s decision making after the Battle of the Wilderness as an illustration of his persistence in the face of extreme misfortune. A quote from Walt Whitman, chosen by Chernow, underlines the point perfectly, “When did he ever turn back? He was not that sort: he could no more turn back than time! You can turn the clock back but you can’t turn time back. Grant was one of the inevitables: he always arrived: he was as invincible as a law: he never bragged – often seemed about to be defeated when he was in fact on the eve of a tremendous victory.”

Chernow argues, in this excellent new biography, that Grant had been toughened by severe hardship in the years prior to the Civil War. The future general and two-term president had been forced out of the army for alcohol abuse in 1854 and struggled to make ends meet in a series of dead end jobs until the Civil War broke out in 1861. According to Chernow, Grant “did not crumble in adversity, which only hardened his determination, and knew that setbacks often contained the seeds of their own reversals. The most dangerous situations brought out his indomitable will.” This remarkable will appeared frequently throughout his life: after the tragic first day at Shiloh; throughout the costly Overland Campaign; during the lengthy siege of Petersburg and Richmond. Shortly after the especially gruesome catastrophe in the Wilderness, Grant told a journalist: “If you see the President, tell him, from me, that, whatever happens, there will be no turning back.” That’s one of the keys to understanding Grant’s unlikely life story: he never turned back.

Grant’s bullheaded determination was seen as a liability by some critics, however. They called him a “butcher” due to the enormous casualties resulting from the Overland Campaign. During the forty day stretch in May and early June 1864, the Army of the Potomac suffered between 55,000 and 65,000 casualties, which was approximately 45% of all those troops engaged. One of Grant’s corps commanders said, “For thirty days it has been one funeral procession past me, and it has been too much!” At Cold Harbor, Grant experienced catastrophic losses after his men tried to assault the well-fortified lines of Robert E. Lee. After the Cold Harbor debacle, Chernow notes, “Grant could never cast off the butcher epithet.”

Chernow feels strongly that this particular criticism of Grant is unfair. He quotes the esteemed historian Bruce Catton who declared: “The legend of Grant as the heedless, conscienceless butcher finds nothing to feed on in the story of the Vicksburg campaign.” Even Lee, Chernow notes, defended Grant against the butcher charge by saying, “Gentlemen, I think Gen. Grant has managed his affairs remarkably well up to the present time.” For Chernow, “Grant was the strategic genius produced by the Civil War. He set clear goals, communicated them forcefully, and instilled them in his men.”

Chernow’s defense of Grant’s military ability is persuasive, though perhaps lacking in nuance. Grant may not have been a butcher, but he often made impulsive decisions that jeopardized the well-being of his men. After Cold Harbor, the highly respected General Emory Upton said: “I am disgusted with the generalship displayed. Our men have, in many cases, been foolishly and wantonly slaughtered.” He later added, in reference to the Overland Campaign as whole: “Twenty thousand of our killed and wounded should today be in our ranks.” Another esteemed observer from the era wrote that future historians will find Grant “guilty of errors and disasters that would have set aside any other General in disgrace.” It might have been illuminating if Chernow had explored such criticisms in greater depth. The fact that Grant was likely an alcoholic, as Chernow skillfully demonstrates, makes the charge of negligence and incompetence even more damning. What if Grant had been drunk immediately before or during such costly battles as Shiloh or Cold Harbor? The wives and children of the fallen soldiers must’ve been haunted by that possibility, regardless of the ultimate triumph of the Union cause.

One of the great strengths of Chernow’s biography is his serious attention to Grant’s postwar career. Chernow believes Grant’s presidency has been ignored or unfairly treated by historians, and makes a strong case that President Grant played an integral role in defending the civil rights of the freed people. The discussion of Amos T. Akerman, Grant’s Attorney General, is noteworthy. Under Akerman’s leadership, federal grand juries brought 3,384 indictments against the Ku Klux Klan, resulting in 1,143 convictions. Chernow credits the Grant administration with defeating “the worst outbreak of domestic terrorism in American history.” Frederick Douglass eloquently summarized Grant’s legacy in relation to African Americans: “That sturdy old Roman, Benjamin Butler, made the negro a contraband, Abraham Lincoln made him a freeman, and Gen. Ulysses S. Grant made him a citizen.”

Having now read Chernow’s Grant and William McFeely’s Pulitzer Prize-winning Grant: A Biography, I find it useful to compare the two books. McFeely, who has a rather negative view of Grant, wrote: “I am convinced that Ulysses S. Grant had no organic, artistic, or intellectual specialness. He did have limited though by no means inconsequential talents to apply to whatever engaged his attention.” Chernow feels otherwise, of course, declaring that Grant was a far-seeing general who surpassed Robert E. Lee “in grand strategy, crafting the plan that defeated the Confederacy.”

Personally, I believe the true Ulysses S. Grant is probably a composite of the two outstanding portraits. McFeely’s disapproving assessment concedes that Grant had moments of great integrity and determination. And the more laudatory Chernow explores Grant’s alcoholism and impulsiveness. The journalist Whitelaw Reid, who reported on the battle of Shiloh from the field, said of Grant: “Such a career laughs at criticism, and defies depreciation. Success succeeds.” Reid added that future historians “will look in vain for such characteristics as should account for his being first in a Nation of soldiers….”

Chernow has now provided us with a compelling explanation of why Grant was indeed the first soldier of the Civil War, yet one can still appreciate McFeely’s conclusion, “No amount of revision is going to change the way men died at Cold Harbor.”