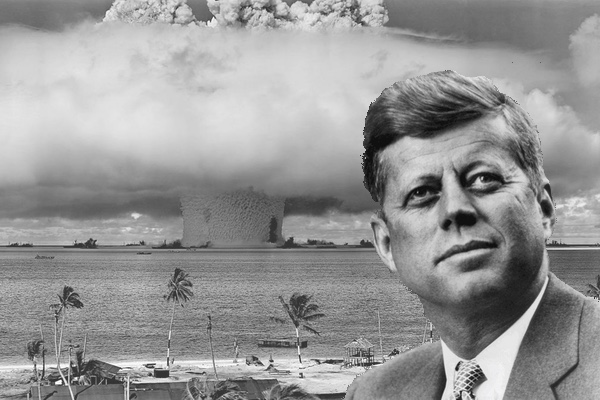 The reckless threats of nuclear war flung back and forth between the North Korean and U.S. governments remind me of an event in which I participated back in the fall of 1961, when I was a senior at Columbia College.

At the end of August 1961, the Soviet government had announced that it was withdrawing from the U.S.-Soviet-British moratorium on nuclear weapons testing that had halted such tests for the previous three years while the three governments tried to agree on a test ban treaty. The resumption of the Soviet government’s nuclear weapons testing that followed was topped off that October by its explosion in the atmosphere of a 50-megaton hydrogen bomb, the most powerful nuclear weapon ever detonated. Meanwhile, the Kennedy administration, determined not to be outdone in a display of national “strength,” quickly resumed U.S. nuclear testing underground and began to discuss the U.S. resumption of nuclear testing in the atmosphere.

From the standpoint of many people in the two countries―indeed, in the world―this renewed plunge into the nuclear arms race was quite alarming. At Columbia my college roommate Mike Weinberg and I considered the whole business quite crazy. Nuclear testing in the atmosphere sent huge clouds of radioactive nuclear debris (“fallout”) into the air, bringing with them cancer and birth defects for vast numbers of people around the world. In addition, these tests of hydrogen bombs―weapons that could be produced with a thousand times the destructive power of the atomic bomb that had annihilated Hiroshima―were in preparation for their use in nuclear war. This nuclear arms race seemed to be a race to disaster.

As a result, some time that fall, Mike and I―spotting a leaflet announcing a student bus trip to Washington, DC to oppose the resumption of U.S. atmospheric nuclear tests―decided that the time had come for us to get out in the streets and protest. People had already been taking part in antinuclear demonstrations. But we had not been among them. In fact, neither of us had ever taken part in any sort of political protest campaign.

On the morning of the student trip to Washington, we turned up wearing our suits (to impress any government officials who might see us) at a chartered bus, parked next to the Columbia campus, only to find ourselves in the midst of a rather bohemian assemblage. The young men sported sandals and beards, the women fishnet stockings and long braids. Despite the differences in style, though, we formed a friendly, congenial group as we hurtled down the highways from New York City to the nation’s capital for our confrontation with government power.

Arriving at the White House, I picked up what I considered a very clever sign (“Kennedy, Don’t Mimic the Russians!”) from the pile that someone had brought along and, together with other demonstrators (supplemented by a second busload of students, from a Quaker college in the Midwest), formed a small picket line that circled around a couple of trees outside the White House. Mike and I, as zealous new recruits, circled all day without taking a break for lunch or dinner.

For decades, I looked back on this venture as little more than the subject for an amusing anecdote. After all, we and other small bands of protesters couldn’t have had any impact on U.S. policy, could we? Then, in the mid-1990s, while doing research at the John F. Kennedy Presidential Library in Boston about the history of the world nuclear disarmament movement, I stumbled on an oral history interview with Adrian Fisher, deputy director of the U.S. Arms Control and Disarmament Agency. He was explaining why Kennedy delayed resuming atmospheric nuclear tests until the end of April 1962, despite continued Soviet nuclear testing during the previous eight months. Kennedy personally wanted to resume these U.S. nuclear tests, Fisher recalled, “but he also recognized that there were a lot of people that were going to be deeply offended by the United States resuming atmospheric testing. We had people picketing the White House, and there was a lot of excitement about it―just because the Russians do it, why do we have to do it?” Fisher concluded: “And that’s the reason we didn’t resume atmospheric testing.” A little more than a year later, in August 1963, after intense public pressure, the U.S., Soviet, and British governments signed the Partial Test Ban Treaty, banning nuclear weapons tests in the atmosphere.

In the midst of today’s nuclear crisis, would America’s Donald Trump and North Korea’s Kim Jong Un be as sensitive to public protest? Perhaps so; perhaps not. But governments―even those headed by arrogant, mentally unstable individuals―are not impervious to public opinion. And who knows what will happen if enough people insist, loud and clear, that nuclear war is simply unacceptable?