Linda Gordon, winner of two Bancroft Prizes and the Los Angeles Times Book Prize, is the author of Dorothea Lange and Impounded, and the coauthor of Feminism Unfinished. She is the Florence Kelley Professor of History at New York University and lives in New York and Madison, Wisconsin. Her latest book is The Second Coming of the KKK: The Ku Klux Klan of the 1920s and the American Political Tradition (October, 2017). 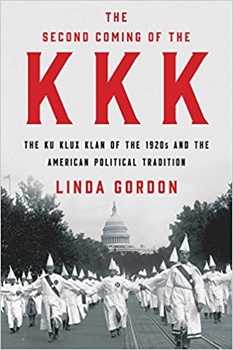 In writing a book about the KKK, I was entering territory not only new to me but also extremely unpleasant. Doing it was not entirely a choice. I was working—I’m still working—on a book about social movements in the 20th century US, using case studies extending from the 1890s to the 1970s. The KKK, by far the largest social movement of the 1920s, was one of these and I wrote a chapter about it. Then Trump and Trumpism unleashed an aggressive white nationalism and “America-First”-ism, and some friends and my editor urged me to expand the chapter into a book.

The 1920s Klan proclaimed itself a continuation of the first Ku Klux Klan, established in the South just after the Civil War, but their differences were significant, and it was those differences that turned the “second Klan,” as it is called, into a mass movement. It was primarily nonviolent, not at all secret, and far larger in the North than the South. By fusing its racism with religion, targeting Catholics and Jews as well as African Americans, it gathered some 3 to 5 million members (estimates vary). It did so by building fear that “aliens,” i.e., those who were not native-born white Protestants, were plotting to steal the country from its rightful owners.

The second Klan preached an evangelical Protestantism and recruited through evangelical churches (only the white ones of course). Klan leaders claimed that 40,000 ministers joined, enticed by exempting them from the initiation fee of $10. 40,000 may be an exaggeration, but we know that thousands of ministers lauded the Klan in sermons. One of their refrains: “if Jesus were alive today, he’d be a Klansman.” It also recruited through a novel tactic: it hired a PR firm, possibly the first social movement to do so, which grew its membership by offering a commission to recruiters, who could keep 40% of each initiation fee.

The second Klan was mainly nonviolent, but not entirely. Like Trump, it communicated mixed messages, probably calculatedly mixed, about vigilantism. The Klan leadership recognized that expanding the organization and its profits—the KKK was a hugely successful moneymaking business operation—depended on remaining legal and legitimate. But its leaders also saw that pugnacious rhetoric and the promise of vigilante opportunities brought in members, especially young men. So the Imperial Wizard, his Grand Goblins and Exalted Cyclopses—these arcane titles and rituals were also part of its appeal—sent a slippery and sometimes bluntly dishonest message regarding vigilantism. They claimed to be running a standard fraternal order, no more religiously or ethnically exclusive than many other fraternals, but their rhetoric hinted at vigilante opportunities.

The northern Klan’s vigilantes, like the southern, operated with the collusion of law enforcement officers; in fact law enforcement was a major occupational category in the second Klan. Plenty of Klanswomen supported this vigilantism, because much of it was directed against Prohibition violators. Police and other Klansmen, some of them legally deputized, jointly conducted raids on saloons and bootlegging operations. Defense of Prohibition was part of Klan bigotry, because it insisted that only Catholics drank and only Jews supplied the booze. Moreover, some Klan vigilantism targeted “unAmericans” even without the claim to be defending Prohibition: posting Klan placards on synagogues and Catholic churches, or conducting parades of costumed Klansmen, with burning crosses, next to the campuses of Notre Dame and other Catholic schools. Malcolm X described in his autobiography how the Klan drove his parental family out of Omaha, Nebraska. A favorite tactic was to kidnap an enemy, take him to the countryside, put a noose around her neck, string the rope over a tree branch, pull him up, then let him down after his gasps became severe enough.

But the vigilante spirit was most consequential in elections. Klan operations fused a social-movement with an electoral strategy, a fusion that characterizes many successful social movements. It mobilized through allegations that America’s enemies were conspiring to take over government, in the case of Catholics, or plotting to undermine its moral values, in the case of the Jews who supposedly controlled Hollywood. Klan candidates for office promised to take back America. Klan voters, organized by sophisticated get-out-the-vote campaigns, put into office 11 governors, at least 45 Congressmen, and thousands of state, county and municipal officers. The Klan provides a perfect example of how a social movement can force politicians and candidates to conform to its agenda, in a matter almost identical to how the activism of the alt-Right today keeps Republicans from challenging the Trump agenda.

Anti-Catholic and anti-Semitic views were, of course, common among elites in the 1920s, seen, for example, in the quotas applied by universities to keep Jewish students to a minimum. But there is a difference between coded and quiet prejudice and loudly shouted prejudice. The Klan resembled Trump’s “base” in legitimating those shouts, turning them into threats, even creating bigotry among people who had not previously been taught that “aliens” were plotting to subvert their nation. I’ve heard the argument that covert racism is as bad as public racism, but the Klan belies that claim. When people keep their bigotry quiet, they do so because they are aware that these views are somewhat disreputable, that reasonable people might think disapprove. The greatest achievement of the 1920s Klan was to legitimate bigotry as part of acceptable discourse, and that is contagious and dangerous.

Two major Klan victories in 1924 exemplify these discursive consequences. In May the Johnson-Reed immigration act installed the Klan’s hierarchy of “races” into law (note that at the time there was no generally agreed distinction between race and ethnicity). It remained the law until 1965. In July 1924 Klanspeople and supporters at the Democratic Party convention thwarted the nomination of the Catholic NY Governor Al Smith for President—the convention became known as the “Klanbake.” In the evenings the Klan set up a large burning cross on the New Jersey side of the Hudson River, visible, of course, from the New York side.