Nixon, Trump and the Strange Career of the Madman Theory

Jeff Kimball has written four books on the Vietnam War, three of which include accounts of the Madman Theory (and one of which is co-authored with Bill Burr) – as well as several journal articles, anthology chapters, essays, and op-eds about the Madman Theory. 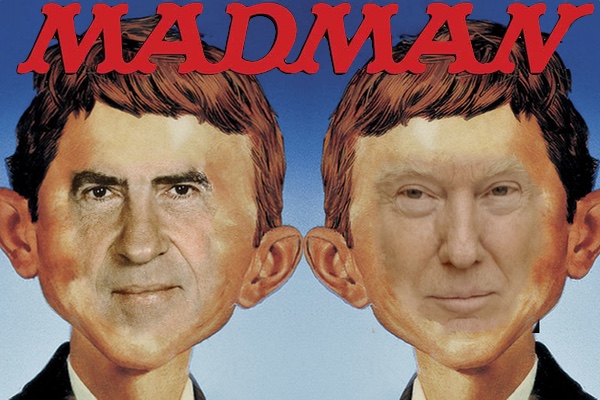 When Richard Nixon explained his “Madman Theory” to H. R. Haldeman while strolling on a foggy beach during the 1968 presidential campaign, he listed four deeply-rooted personal convictions. (1) He was confident he could coerce Hanoi into making his requisite diplomatic concessions by (2) threatening to unleash extreme military force against North Vietnam. (3) He would signal Hanoi that such force might consist in using one or more nuclear weapons. (4) The credibility of his threats would be based on his notoriety as a tough, mean-spirited, unpredictable, and somewhat unhinged political combatant, who had also advocated military solutions to diplomatic problems in the past and was now, as President of the United States, in a position to carry out irrational or excessive military measures. The threatened operations would be irrationally excessive in the sense that they would be disproportionate and dangerous in the context of the real risks and stakes for Nixon and the United States in Vietnam. 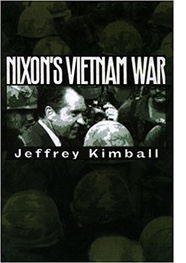 Nixon’s credibility in this regard could not rest on his military reputation, which, of course, did not match that of former President Dwight Eisenhower, under whom Vice President Nixon had served in the 1950s and whose nuclear “brinkmanship” Nixon admired. By the late 1960s, moreover, President Nixon’s threat-making credibility could not as in the past be based on America’s nuclear superiority, because the Soviet Union – a backer of Vietnamese resistance to US intervention in Indochina – had emerged from nuclear inferiority to nuclear equivalence in the years following the Cuban Missile Crisis.

Not a scientific theorem, Nixon’s Madman “Theory” was at best an unproven stratagem. More accurately, it was simply a ploy founded upon Nixon’s faulty interpretation of the supposed effectiveness of the brinkmanship of President Eisenhower and Secretary of State John Foster Dulles – as well as Nixon’s own wishful or self-deceptive thinking in the midst of a bewildering, deadlocked, quagmire war in Indochina. It also reflected his worries about being able to end the war “with honor” and win reelection to a second term. Not the least, it reflected his strange personality. Whether Nixon suffered from a personality disorder is an open question. But his behavior did indeed exhibit features associated with narcissism, paranoia, and passive-aggressiveness.

The roots of Nixon’s Madman Theory are also to be found in Nixon’s observations of former Soviet Premier Nikita Khrushchev, South Korean President Syngman Rhee, and perhaps even his own father, Frank Nixon. Dick Nixon recognized Khrushchev as a “tough leader” but “not a madman.” He believed, however, that President John Kennedy had been rattled during the Cuban Missile Crisis by the thought that Khrushchev might actually have been insane or at least dangerously unsteady – i.e., a madman. Nixon admired Rhee for his ability to appear unpredictable and thus instill fear in the minds of the leaders of North Korea. In Dick’s youth, moreover, he had observed and experienced his father’s boisterous, cantankerous, aggressive, hot-tempered, argumentative, and vindictive behavior. Frank had been a bully of sorts. Dick may also have read or heard the radio broadcast one of Daniel Ellsberg’s Harvard lectures in 1959, “The Political Uses of Madness,” in which he tried to describe the “sound of blackmail” as practiced, for example, by Adolph Hitler. The mid-to-late 1960s were also a period of Mutual Assured Destruction (MAD) and, in popular culture, the movie Dr. Strangelove, as well as a detective novel by Ellery Queen entitled The Madman Theory.

After Haldeman broke the story of Nixon’s Madman Theory in his 1978 memoir, investigative reporter Seymour Hersh took the account seriously and incorporated it in his 1983 book The Price of Power. But those few historians and political scientists who wrote about the theory were skeptical or dismissive (there may have been exceptions I am unaware of). Some did so in part because they misunderstood the Theory, assuming that the practitioner – in this case, Nixon – had to be crazy in order to implement such a ploy, and they thought Nixon was not crazy. Or, they took his word that he had never voiced the term “Madman Theory.”

Like Hersh, I also took Haldeman’s account seriously and began researching, speaking, and writing about it soon after a 1987-1988 trip to Vietnam, which included a visit to a Hanoi neighborhood that had been heavily bombed during operation Linebacker II. Nonetheless, despite conference papers, articles, books, and Web essays (as well as journal articles in 2003, AP and Agence Presse France coverage of our findings, and a book with Bill Burr in 2015 about Nixon’s 1969 nuclear alert), the Madman Theory remained in the historical shadows until Donald Trump campaigned for the presidency and won. Hardly a week goes by since his inauguration without pundits, journalists, and others writing an op ed or talking on TV about Trump and the Madman Theory in relation to his early-morning tweets about North Korea and his frequent threatening remarks directed against all sorts of entities and people.

But here’s the thing. My hunch is that before his hearing stories about the Madman Theory in relation to his behavior, Trump had probably not been aware of Haldeman’s account of his walk with Nixon on a foggy beach. Not a reader of books or other serious writings, he may not have even heard the term, Madman Theory. If it seems he is practicing Madman Theory threat making, my view is that this is likely the result of his narcissistic and bullying mentality. Narcissists have difficulty tolerating criticism, crave attention and admiration, possess fantasies of success and power, lack empathy, are exploitative, harbor unreasonable expectations of automatic compliance, and behave arrogantly. Bullies yell and scream, make unreasonable demands, display uncontrolled anger, threaten violence, behave aggressively, and seek to dominate. Trump’s father was also a bully, and both were involved in the cutthroat New York City real estate market, in which threats to close a deal or not pay contractors or to evict tenants or to engage in business risks are commonplace. Moreover, Donald Trump is not only ignorant of foreign affairs but willfully ignorant of foreign affairs – and he lacks the capacity for learning and growing.

Over-the-top threatening conduct is not so much a strategy as it is a symptomatic behavioral pattern. Personality disorders, I am told by psychologists, manifest themselves on a continuum of affectivity and intensity – i.e., some have a worse case than others. I would guess that if Nixon had and Trump has personality disorders, Trump’s case is much worse than Nixon’s was.

I put it this way in a History News Networkcommentary on October 2, 2016: “With Eisenhower, Dulles, Nixon, and Kissinger, true madness – that is, mental illness – was not a factor. They were posing as unpredictable madmen ready to go to the brink. Yes, of course, some of their strategic ideas were dangerous, and Nixon did have some serious personality quirks, but to the best of historians’ knowledge, none of these men were certifiably crazy or suffering from a recognizable mental disorder (although Nixon may have come close), and all of them were knowledgeable about strategy, foreign policy, and diplomacy. What about Donald Trump? He lacks foreign policy experience and knowledge – except for an ability to market his brand name. Off the record, moreover, psychologists consider him to be a narcissist – and possibly one who suffers from a genuine narcissistic personality disorder accompanied by a lifelong history of bullying. Is that a danger? Let’s hope we don't find out. He could dangerously redefine the meaning of the ‘bully pulpit.’ ”

A recently published book edited by Yale M.D. and forensic psychiatrist Bandy X. Lee, The Dangerous Case of Donald Trump – consisting in essays by psychologists and psychiatrists about Trump’s observed behaviors – found that these are consistent with symptoms of narcissistic personality disorder, sociopathy, and other disorders. Lee remarked: “Collectively with our coauthors, we warn that anyone as mentally unstable as Mr. Trump simply should not be entrusted with the life-and-death powers of the presidency.”

On the other hand, in an October 1, 2017 Axios story based on a White House leak, the author, Jonathan Swan, reported that Trump had told aides: “That's not how you negotiate. You don’t tell them they've got 30 days. You tell them, ‘This guy's so crazy he could pull out any minute.’ ” Swan remarked that “Trump's comments today belong to a pattern that fits the ‘madman [theory]’ or ‘he might just be crazy enough to do that’ theory of international relations.”

My hunch is that White House aides leaked this story in order to make Trump appear more rational than he is – that he is not really crazy and is instead rationally deploying the Madman Theory. I am skeptical of this origin story of his loud and public threat making. It’s not really a Madman Theory if the threatener is truly crazy.