David Mould is Professor Emeritus of Media Arts and Studies at Ohio University, and author of Postcards from Stanland: Journeys in Central Asia (Ohio University Press, 2016). He blogs about travels in Asia and Africa at www.davidhmould.com and on Facebook. 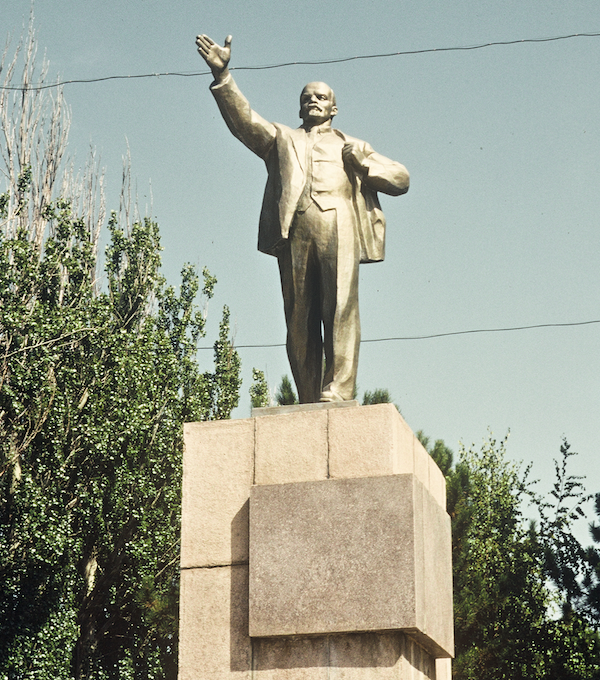 Lenin statue in the town of Karakol in Kyrgyzstan

In my adopted hometown of Charleston, West Virginia, a small but noisy group is campaigning to remove the statue of the Confederate general, Thomas “Stonewall” Jackson, from the lawn outside the State Capitol. A small and equally noisy group opposes the removal.

It’s a conflict repeated in communities across the Midwest and the South, particularly in borderland states such as West Virginia, Ohio, Kentucky and Indiana where the Civil War still seems to be going on, at least in local debates over how to deal with history.

If the removal group has its way, the general will be unceremoniously dismounted from his perch facing the Kanawha River, and maybe even decapitated. I hope the crowd does not pitch the dismembered body over the levee, creating a hazard for barge traffic. Perhaps the state department of transportation can save taxpayers money and use the rubble to shore up a crumbling culvert on the interstate.

Or perhaps Jackson can be removed to a more discreet location where schoolchildren will not embarrass parents and teachers, who have managed to ignore the statue for years, by asking, “Who’s that guy with the sword and what’s he looking at?” The dog park, a few blocks away in an ethnically mixed neighborhood, is one option. There, Jackson can stand tall, providing the kind of surface where dogs like to raise their legs. He will be hermetically sealed from the African American-owned barbershop a couple of doors away by a high brick wall.

Or perhaps he will stay at the Capitol.

Let me be clear. I am morally opposed to almost everything for which Jackson stood, rode and fought. I would prefer legislators emerging from their offices to face the stern figure of Mother Jones, although I don’t expect that to happen. However, as a historian, I know that tearing down a statue only creates a pile of rubble that someone must haul away; it does not erase or change history. For better or worse, Jackson was a man of his times, fighting for a cause in which he believed, and those who built the statue thought he was worth honoring. We gain more by discussing the Civil War, its causes and legacy, than by removing one of its leading players and pretending the whole thing never happened.

If we get rid of Jackson, Robert E. Lee and other Confederate leaders, where do we stop? Surely, Andrew Jackson, architect of the removal of the Cherokee, must go, along with other 19th century politicians and military leaders guilty of oppressive policies and brutal campaigns. We should examine the public and private lives of Ben Franklin, Thomas Jefferson, Alexander Hamilton and maybe even Abraham Lincoln. A dalliance with a slave girl? A shady financial or real estate deal? Surely, they do not deserve to be honored in stone. Pretty soon, if historical vigilantism takes hold, we’ll be left with town squares and plazas with untidy stone stumps and debates over whether to erect statues to modern heroes and heroines.

The destroy-the-statue-to-fix-history movement is not confined to the United States. In South Africa, angry crowds have torn down statues of the colonial administrator and mining magnate Cecil Rhodes, regarded by many as one of the architects of apartheid. In the 1980s, as China emerged from the cultural revolution and began to liberalize its economy, statues of its great communist leader, Mao Tse-Tung, took a tumble (although they are now, like those chic images of Che Guevara, back in retro fashion).

I witnessed similar debates over a historical figure from the mid-1990s on visits to the former Soviet republics of Central Asia—Kazakhstan, Kyrgyzstan, Tajikistan and Uzbekistan—for teaching, research and consulting work. The figure in question was the founder of the Soviet Union, Vladimir Ilyich Ulyanov (Lenin). For almost three-quarters of a century, his statue, typically with his right arm raised pointing towards some misty socialist nirvana, had been a fixture in public places. With the Soviet Union gone, should he stay or should he go?

In Eastern Europe, the Baltic States, and the Caucasus, the break with the past came quickly and decisively, and the Lenin statues fell almost as fast—in 1989 in Krakow, in 1990 in Bucharest, in 1991 in Tbilisi and Yerevan, and so on. Yet in Russia, Belarus, eastern Ukraine, and some Central Asian republics, Lenin statues still stand in many public squares and parks. The presence or absence of a Lenin statue tells us something about how ready a country or a people is to face the ghosts of its past.

In 2012, Russian lawmakers proposed relocating Lenin monuments and statues to museums or side streets, or selling them to collectors, ostensibly to reduce vandalism and maintenance costs. The debate in the parliament (Duma) revealed an ideological agenda. One deputy claimed that the presence of Lenin statues meant the revolutionary leader still exercised a stranglehold on history, and that was unfair to other Russian historical figures. Didn’t Ivan the Terrible or Catherine the Great deserve equal historical billing? Predictably, the Communist Party did not like the idea. As one senior party member put it: “Lenin is the founding father of the Russian Federation. Same as George Washington in America.”

In 1991, after the Soviet Union collapsed, Kyrgyzstan (formerly the Kyrgyz Soviet Socialist Republic) was added to the world political map. Lenin Square in the capital city, Bishkek, was renamed Ala Too Square. However, the statue of Lenin in an iconic pose, his right arm raised in the direction of the mountains to the south, remained. Locals jested that he was trying to direct traffic or hail a taxi on one of the city’s busiest streets.

In August 2003, the authorities moved the statue to a more discreet location—a park across the square behind the historical museum. Lenin was replaced by a symbol of Kyrgyz nationalism, a statue of Erkindik (Liberty)—a winged female figure on top of a globe, holding a tunduk, the circular frame that forms the top of the traditional Kyrgyz nomadic dwelling, the yurt. As the Lenin statue was dismantled, protesters filed a lawsuit and marched with “Hands Off Lenin!” banners. The Communist party claimed officials wanted to convert a bomb shelter under the statue into an underground retail complex.

The removal was supported by a coalition of NGOs. “Lenin did not offer anything except violence and dictatorship,” its leader, Edil Baisalov, said. He claimed that there were still about 4,000 Lenin statues in towns and villages across the country. “For Kyrgyzstan to still have so many monuments to Lenin is like Germany preserving statues of Hitler. If we really want to build a democracy and a new civil society, we must tear such things down.” Other commentators were more cynical. “If the authorities don’t like Lenin anymore, why don’t they just remove the statue’s head?” asked one parliamentary deputy. “That way, each new leader could simply screw a model of his head onto Lenin’s body. Just think of the money that could be saved.”

In Kyrgyzstan, as in other countries, statues of historical figures, even reviled ones, may help people at least acknowledge, or even better understand, their history. Removing them, just like editing inconvenient ideas and episodes from history textbooks, leads to historical amnesia. That’s the realm of Holocaust deniers, and that’s not where we should be going.

If the Stonewall Jackson statue is deemed unacceptable for the West Virginia Capitol grounds, what will replace it? I have a modest proposal. The state can improve its limited cultural links with Central Asia with a statue exchange. Stonewall Jackson for Lenin. Although if Lenin is placed in the same position on the statehouse lawn, he will appear to be saluting the South.