by Marc Gallicchio and Waldo Heinrichs 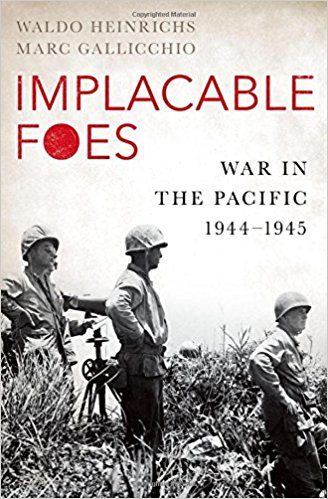 As the Trump administration prepares to send more troops to Afghanistan and considers how to respond to North Korean provocations, pundits and military experts evaluating those situations have struggled to assess when the costs of military intervention outweigh its potential achievements. In the run-up to the 2003 invasion of Iraq U.S. General David Petraeus put this query rather more pointedly: “Tell me how this ends?”

In the years since Petraeus posed his now famous question to military historian Rick Atkinson, we have become wearily accustomed to the endlessness of the wars in Afghanistan and Iraq. Those conflicts have joined the undeclared wars in Korea and Vietnam to form a chain of failure or, at best, indecision that has characterized America’s major military confrontations since the “Good War.”

World War II, whose end we commemorate on September 2, often seems different from later wars because of America’s indisputable victory over its enemies, an outcome that was solemnized by the Japanese signing of surrender documents on the deck of the USS Missouri on September 2, 1945. But rather than think of World War II as different, we would do well to consider how the final months of the war against Japan foreshadowed the challenges that would vex American efforts in future conflicts.

As American forces closed in on Japan, American war leaders struggled to meet the military’s manpower and materiel requirements while still maintaining a healthy domestic economy. In fact, by the summer of 1945, the disputes over economic and logistics policies had become so intense that they threatened to affect America’s strategy for victory.

Manpower policy in World War II sought to insure that the Army got the men it needed without hindering the production of materials needed to fight the war. At the same time, the Army tried to spread the burdens of war evenly among those called into military service. In order to reward those who had done their part, the Army adopted a system of partial demobilization that awarded points for combat experience and time-in-service. When soldiers accumulated 85 points they were eligible for discharge. The system went into effect immediately after Germany’s surrender in May 1945.

One unwelcome result of partial demobilization was that it stripped from the Army its most experienced soldiers on the eve of the war’s climatic battles. Another was that it proved difficult to implement. By June, GIs and their families were chafing at delays in processing discharges. Sympathetic congressmen denounced the Army and called for simplified and speedier processing. The public focus after V-E Day had shifted from Europe to peacetime pursuits, not Asia.

One result of this shift in attitudes was that the Army came under fire from the civilian officials charged with preparing the nation’s economy for reconversion to peace. The Army, with seven million men in uniform, remained the largest force in the economy. Those in charge of reconversion complained that the Army’s plans for invading Japan, set for November 1945 and March 1946, created untenable manpower shortages and risked major economic disruption at home. Behind these criticisms loomed the haunting memory of armies of unemployed workers roaming America in the Great Depression.

In the midst of this turmoil at home, the Joint Chiefs of Staff learned that the Japanese had correctly guessed where the Americans would invade Japan and had built up their defenses far beyond what the Chiefs expected to encounter. The projected costs of invasion were rising as American enthusiasm for the war was waning.

By late July, the Navy, which had doubted the need for invasion, prepared to directly challenge the Army’s plans. The Navy’s preference for using blockade and bombardment to force Japan’s surrender dovetailed with the interests of those managing economic reconversion. Blockade required fewer servicemen and less materiel. It would, however, further protract the war. Army Chief of Staff George C. Marshall countered that a prolonged war would feed war weariness at home and predispose the public toward a negotiated settlement that would yield an incomplete victory and leave Japan’s militarists in command. Already, there were public officials calling for a “clarification” of unconditional surrender, by which they meant a compromise with Tokyo that would leave the institution of the emperor unharmed. In typical Washington fashion, this debate over strategy and war aims spilled into the public realm accompanied by leaks of congressional testimony and classified documents.

By August 1945, the Army found itself preparing to fight the most demanding campaigns of the Pacific War with exhausted divisions replenished by green troops. Arrayed against the Army were a determined enemy, a restive public, and increasingly assertive political leaders who openly questioned the military’s strategy for victory. The atomic bombs in August cut short a growing debate over the war’s purpose, produced swift decision where none had seemed likely, and thus obscured for later generations the extent to which American strategy had been unhinged by Japanese resistance and the fissuring of unity at home.

It also obscured the continuities between America’s “Good War” and the protracted conflicts that followed. After V-J Day the Army continued to experiment with ways of spreading the burden of military service in time of war. Partial demobilization evolved into the troop rotation system in Korea and the one-year tour in Vietnam. Ultimately the Army abandoned altogether its commitment to a force built on the ideal of the citizen-soldier and shifted to the all-volunteer force, the better to fight long wars. In doing so, it also abandoned the goal of spreading the burden of service evenly across the citizenry.

Despite their insistence that Americans could have both guns and butter, American war leaders in Korea and Vietnam found that economic constraints imposed limits on their choice of strategies. In 1968, President Lyndon B. Johnson’s senior advisers, the so-called “Wise Men,” were so worried about the health of the American economy that they pulled the plug on escalation in Vietnam and urged a negotiated settlement. Today, America’s long wars in the Middle East continue to wreak havoc on the domestic economy as politicians find that even in an age of seemingly limitless deficits, they cannot buy guns and butter.

So where does this end? No one knows for sure. But thinking about the continuities between the “Good War” and America’s subsequent conflicts can give us a better idea of where it began.