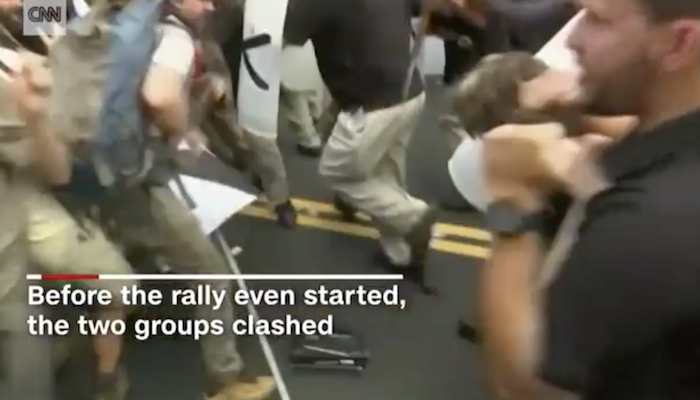 In the immediate aftermath of the horrific Charlottesville march and neo-Nazi melee, the mainstream media turned mainly to male historians for comment  –  just as they always have.  A check of the New York Times Race page shows that the first historian quoted in the paper was Ed Ayers, the former president of the University of Richmond.  That was on August 13, two days after the initial march.  On August 15 the Times featured a raft of quotations from historians. The list included three males  –  the director of the American Historical Association, a Yale historian, a Princeton historian  –  and one female, Annette Gordon-Reed, the Harvard lawyer and historian who wrote the definitive book about Jefferson and Sally Hemings.

The next day, the 16th, the Times cited a male historian at the University of North Carolina in a story about Baltimore's Confederate monuments.  The same day the paper featured quotes from Bob Dallek and Michael Beschloss, two name historians who frequently make the news. Later in the day the paper quoted a woman historian at Villanova, Judith Giesberg, editor of the Journal of the Civil War Era, in a story about the Trump attorney who forwarded an email "echoing secessionist rhetoric."  And so it went, male historians clearly outnumbering female historians in the news pages of America's leading newspaper.  The op ed pages also favored male historians, as did, we confess, the pages of HNN. Only HNN's survey of historian tweets featured a lot of women historians.  (In our defense no women historians submitted pieces for the homepage.)

But then a funny thing happened.  At the New York Times and other papers like the Washington Post and at online publications a bevy of women historians submitted op eds that began to be published.  The Post alone featured seven op eds by women historians on its new history page, Made by History, which is edited by three scholars, two of whom are women, as Margaret O'Mara notes below in a Facebook post.  An additional op ed ran on the opinion page.  It was by Karen L. Cox, a professor of history at the University of North Carolina at Charlotte, who managed to get another piece published in the Times  –  a twofer that's virtually unheard of.  Over at The Conversation and the Huffington Post more women had luck getting their pieces published.

While the men were hardly neglected  –  Eric Foner was cited in news stories from one end of the country to another and also had an op ed in the Times  –  it was the women's high visibility that drew notice.  When HNN failed to highlight the pieces by women we got taken to task on Twitter and Facebook.  (One tweet claimed we hadn't included any women on the page where we are posting links to relevant content related to Charlottesville, but this wasn't accurate.) We corrected the oversight by posting a dozen links to articles by women historians.  (Hat tip to Historista's Megan Kate Nelson for this.)

One historian claimed that the majority of op eds written about Charlottesville by historians were penned by women.  That may or may not be true.  But enough were that this crisis may mark a turning point.  Heather Ann Thompson notes, however, that it's important to recognize what kind of turning point we're at, if indeed this is a turning point.  On an email string with other women historians, Thompson, the author of a Pulitzer Prize winning book on the Attica Prison uprising,  observed that "long before the WaPo we had all been publishing regularly in top public outlets. For myself that includes The New York Times, Newsweek, Time, The Washington Post, Jacobin, The Atlantic, Salon, Dissent, NBC, New Labor Forum, The Daily Beast, and The Huffington Post, etc. and I know that is true of others in this email chain. The academy must face that this is 2017 –  not 1967  – and therefore we have been at this a long time. We are as prolific in the public sphere as the male historians and our analyses are as critical. The fact that those compiling lists or imagining who best represents the work in the profession have not recognized this and have not shouted out our works equally is the problem – not that we are only just now breaking into the field of public scholarship and thus folks are just playing catch up. This distinction is vital."