Matthew Crow received his PhD in History from UCLA in 2011, and is an Assistant Professor of History at Hobart and William Smith Colleges in Geneva, NY. He is the author of Thomas Jefferson, Legal History, and the Art of Recollection, published by Cambridge University Press. 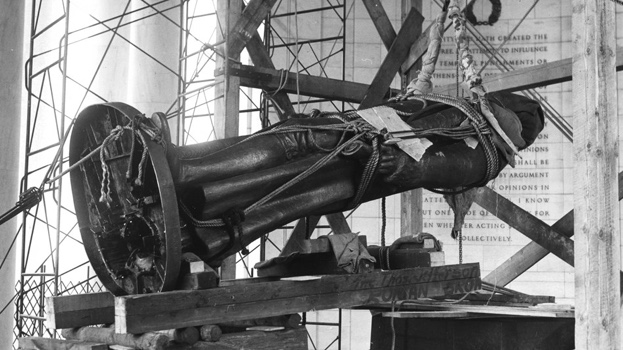 Bronze statue being lifted into place within the Jefferson Memorial Chamber

Vicious battles over public history are not going away anytime soon, and the President is doubling down on the politics of race and memory. In his third round of comments on the deadly white supremacist rally in Charlottesville, VA, Trump accused the left of nothing less than an attack on national culture and history. In a perverse but highly strategic move, he echoed folktale warnings about the tendencies of targeted hate to spread by asking not which minority group is next, but whose monuments are next to be toppled. The thought white Americans were meant to take away was this: which cherished memorials of the shrinking white majority are next? 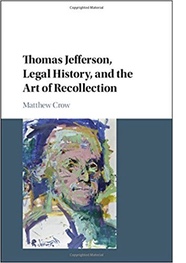 Anyone who thinks last Tuesday night's press conference was unhinged is missing the point. There is a clear calculation on the part of the President and at least some of his advisors that increasing demands for removing Confederate monuments can be used to aggravate broader white anxieties tied to changing interpretations of history. Just like it was no accident that Trump wondered aloud about the fate of the Washington and Jefferson Memorials in the nation's capitol, it was certainly no accident that white supremacists came to Charlottesville, a city where public memory of the Founding and of Thomas Jefferson in particular looms far larger than that of the Civil War. Indeed, on the Friday night before the rally, they marched to a statue of Jefferson through the idyllic campus of the University of Virginia, founded by Jefferson in 1819. Like his home overlooking the city, the fruits of slave labor on campus are as ubiquitous as the memorials to the Sage, and the Master, of Monticello.

Soon, a memorial to the role that slaves and their labor played in the construction of the University will adorn the grounds. That is a very important step in its own right, and it proves that communities can make history and grow by reimagining what counts as history and expanding who they remember making it. It will also be a chapter in a larger, ongoing story about the importance of memory and history to politics. The lines historians usually like to draw between history and memory are hardly clear-cut. Politics, we have learned recently, is made up of our understandings of history, and political debate about where we are going consists in large part of contrasting images of where we have been.

The primary audience for the President's remarks was not avowed white supremacists, but other whites who might begin to feel their own sense of history under threat. His comparison of military statues of Robert E. Lee and Stonewall Jackson to the monuments of Washington and Jefferson was as important politically, if not as repugnant morally, as the "both sides" narrative so much discussed in the media. While completely overlooking the fact that the vast majority of so-called Confederate memorials were constructed as anti-Civil Rights monuments, the point is to suggest that attacks on such monuments could easily lead to attacks on not only other figures, but entire institutions. If we were to get rid of every structure that could be tied to historical injustices, we would be at work tearing them down for a very long time, and not only the University of Virginia but a good deal of the national capitol itself would have to go (indeed, Arlington National Cemetery is in General Lee's front yard). That this is ridiculous should go without saying, but that it needs to be said is indicative of the subtlety and danger of the President's moves here.

Now, that being said, it is a real and important question to ask what a statue of Thomas Jefferson can communicate to a black student or a woman or anyone else at the Universities of Virginia, Kentucky, Missouri, Columbia University, or the College of William and Mary. When you are talking about images of Jefferson, whose legacy has been at the center of recent cultural fights over U.S. history, you are talking about a loadstone in the foundations of national history and politics. A new battle in the story of those fights has been enjoined, and to successfully answer the President, people of good will should be fully aware of the need not to abandon that piece of history, but to reclaim it.

'Jeffersonian' has often been the adjective Americans attach to the ideals of participatory democracy. A participatory politics, of course, needs a participatory history, and Jefferson's enthusiasm for participation as a benchmark of civic life is today an admonishment to centrist, merely meritocratic liberalism as much as it is to the anti-egalitarian conservatism of the last several decades. One of Jefferson's positive contributions was his insistence that from the moment he died his own life and legacy would not be worth the paper or the plaques they were printed on unless they were important to the life of democracy; the earth, as he said, belongs to the living. The time may well come "in the course of human events" when the image of Jefferson and the word Jeffersonian cease to be useful in achieving that goal, but it would be both a historical and political mistake to think that is were we are now.

The white supremacist violence on display in Charlottesville was different in kind and intent than the racism of Jefferson's attempts to square away his dependence on slavery. Both are odious and important to confront, but to confuse the two not only misunderstands the dangers of the present moment, but threatens to give up precious yardage of public historical ground to a newly emboldened enemy. The promise of equality Jefferson wrote about has still not been achieved, and the document in which he made it is still there to be insisted upon. We should think long and hard before we let enemies of the Republic claim one of its creators as their own.