The Trump Administration’s Review of National Monuments Smacks of Paternalism

Adam M. Sowards is a professor of history at the University of Idaho. 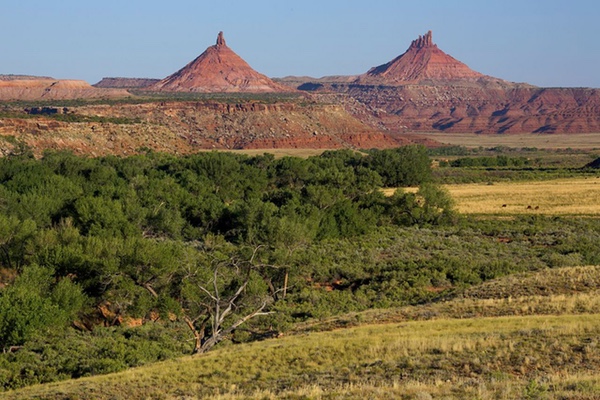 The American West and the Department of the Interior have a complicated history. Like any long relationship, each party has seen the best and worst of each other. During strained moments like today, we are tempted to remember only the hurts. But in mature relationships, partners learn from past moments of strife to build a better future.

Secretary of the Interior Ryan Zinke is off to a rough start and ignoring this history at his peril.

The president ordered Zinke to review all the national monuments greater than 100,000 acres created since 1996. Supporters hope this step might allow Interior to wipe the slate clean and rewrite recent conservation. This is especially appealing in southern Utah, home to the most controversial monuments: Grand Staircase-Escalante and Bears Ears.

During Zinke’s recent visit there, he betrayed a troubling lack of self-awareness about Interior’s past. For instance, besides the well-known National Park Service, Bureau of Land Management, and the Bureau of Reclamation, Interior oversees the Bureau of Indian Affairs. The BIA has been in Zinke’s Department since before the Civil War, and the history is sad.

In broad strokes, the agency sought to eliminate Native people from the Republic and, failing that, at least to destroy indigenous cultures through boarding schools and to erode their land base through allotment. By 1900, Indian populations reached a nadir. At the same time, the conservation movement began reworking the West with Interior agencies dispossessing and excluding Native people from their land and violating treaty agreements.

Consider the Antiquities Act. Passed in 1906, the law allowed the president to create national monuments and ostensibly protected indigenous artifacts from plunder, a necessary prohibition against looting. But what followed found Native Americans kept from interpreting their history and artifacts, as museums, universities, and “experts” controlled access to material culture and approved history. It amounted to yet another example of forced assimilation.

Native communities pushed back. By the late twentieth century, tribal groups exercised more control over their history, including archaeological sites and artifacts. The Archaeological Resources Protection Act (1979) requires explicit consent for digs on Indian land, and the Native American Graves Protection and Repatriation Act (1990) began the process of returning stolen material from federal agencies and museums back home. After decades with little recourse, tribes today have nominal federal protection over their antiquities.

Meanwhile, during the 1990s, the Clinton administration consulted with tribes when developing management plans for Grand Staircase-Escalante National Monument. But that pales compared with the role Native people have played with Bears Ears. Native groups, such as Utah Diné Bikéyah and the Bears Ears Inter-Tribal Coalition, have led efforts to protect Bears Ears in part because of the desecration of sacred sites and artifacts. The national monument is the first of its kind, a place protected because of insistent indigenous voices. Leonard Lee, a Navajo who helped usher this from idea to reality, put it simply, “It was the first time in history that Native Americans were heard.” As such, Bears Ears is a monument to Indian resilience.

Predictably, the president’s statements about national monuments are inaccurate. He called it a “massive federal land grab” when it was already federal land. He spoke of putting the “states back in charge” when they never were. But such “fake history” is routinely deployed in public lands battles.

More troubling has been the paternalism evident here, a damaging and disappointing throwback to the bad old days of federal Indian policy.

Recently, Senator Orrin Hatch lectured, “The Indians, they don’t fully understand that a lot of the things that they currently take for granted on those lands, they won’t be able to do if it’s made clearly into a monument or a wilderness.” When asked for specifics, he said, “Just take my word for it.”

Then, during Zinke’s visit, a persistent Navajo activist, Cassandra Begay, got under the secretary’s skin. Tired of her questions, he whirled and wagged his finger at her, admonishing, “Be nice. Don’t be rude.”

Zinke carries with him the burden of his agency’s history. His behavior resembles too closely the dominant, scolding patriarch the federal government too often has been.

Ranchers and climate change industry representatives, with whom Zinke has passed much time, read Bears Ears through the tired playbook of overreaching federal regulations. But it needs also to be read through the playbook of white paternalism and the Department of the Interior’s centuries-long assault on Native rights.

There are many reasons to celebrate—and retain—Bears Ears National Monument. A testament to resurgent Native sovereignty is one of them.