Paul Adler is a lecturer at Harvard University. He received his PhD in history from Georgetown. 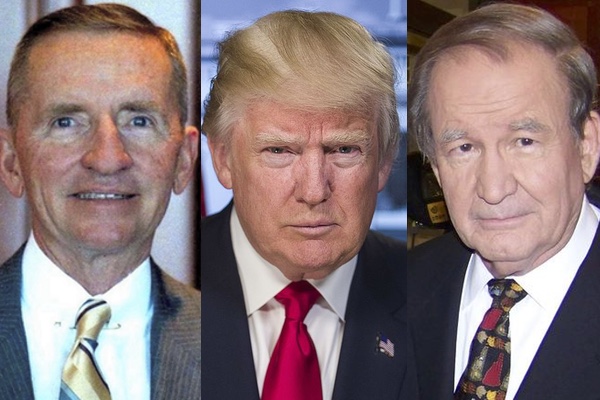 During the 2016 campaign, Donald Trump regularly denounced the North American Free Trade Agreement (NAFTA) as “the worst trade deal maybe ever signed anywhere.” Trump’s trade tirades likely helped him win the general election. As president, some of his highest approval ratings followed his denunciation of Carrier’s outsourcing to Mexico. In his first weeks in office, Trump appointed individuals and made policy moves that made it seem he meant to turn his rhetoric into reality.

Yet, now Trump has all but backed down. Of his policy reversals, stepping away from withdrawing from NAFTA still seems surprising. After all, trade is about the only issue that Trump has shown consistency on, issuing protectionist pronouncements since the late 1980s.

To understand Trump’s malleability on trade, it is helpful to compare him to two predecessors: Ross Perot and Patrick Buchanan. Both men denounced trade from a conservative nationalist perspective. Unlike Trump however, their critiques included multinational corporations as principal villains. Meanwhile, Trump largely demurred from blaming business – a rhetorical move that shows how his nationalist rhetoric can be simultaneously genuine and more pliable than it seemed.

Perot and Buchanan arose at a time when conservatives questioned the role of the United States in the world, including economically. Most of the GOP establishment lauded free trade as an engine that generated prosperity at home and solidified capitalism overseas. Yet, trade was not particularly popular in the post-Cold War United States. Between 1979 and 1989, the U.S. manufacturing sector lost 1, 428,000 jobs, and while trade was not the only or primary culprit, it was an important one.

In the early 1990s, NAFTA became the focal point for the trade debate. The loudest voice decrying NAFTA was a famous, folksy, and conspiracy-minded businessman who ran for president: Ross Perot. In his 1992 third-party presidential candidate, Perot famously declared that NAFTA would cause a “giant sucking sound” of jobs fleeing the U.S. for Mexico. As the only anti-NAFTA presidential candidate, Perot appealed to areas harmed by trade – areas that gave him some of his highest vote totals, helping him reach 19% of the popular vote. Perot sounded nationalistic notes, warning of Mexican lobbyists corrupting U.S. democracy and of NAFTA leading to increased “illegal immigration.”

At the same time, Perot also aimed his barbs at fellow business leaders. Perot accused CEOs of trumpeting NAFTA without regard to workers because they “don't care about anything but making money.” Nor did Perot’s sympathies end at U.S. borders. During his infamous debate with Vice-President Al Gore on CNN’s Larry King Live, he opened with a paean not for the scrappy Midwestern steelworker, but rather the exploited Mexican maquiladora worker.

Perot’s unorthodox style and views made him an unusual standard-bearer for the right. This allowed ample room for Patrick J. Buchanan to also uphold the conservative nationalist mantle. A close aide to presidents Richard Nixon and Ronald Reagan, the end of the Cold War unleashed Buchanan’s inner isolationist. In 1992, he ran for president with a platform that included the message, “Make America First Again.”

Buchanan differed from Perot by explicitly tying anti-trade sentiment to white ethnonationalism. “We want to remain two distinct nations . . . consistent with our separate national identities and national character,” he proclaimed. Buchanan lambasted “illegal immigration” and called for constructing a border wall. Buchanan also aimed his heated rhetoric at corporate leaders. Writing in the Washington Post shortly before the congressional vote,he declared the reason NAFTA was happening was “love of money. Our corporate elite is desperate for investment guarantees . . . so they can move factories and jobs south, and to hell with the devastation caused to the communities left behind.”

After the 1992 election, both Buchanan and Perot tried to rally popular opposition to NAFTA. Yet, despite their efforts and those of unions, public interest advocates, and grassroots activists, NAFTA became law. Although about a quarter of Republicans in the House of Representatives voted against NAFTA, in the aftermath they appeared marginal. The free traders appeared in secure control of the GOP. Or so they thought.

In 1996, Patrick Buchanan again entered the Republican presidential primaries. This time, free trade was one of his fundamental issues. “When I am elected president of the United States, there will be no more NAFTA sellouts …. We’re going to bring the jobs home and we’re going keep America’s jobs here,” he thundered. Buchanan’s anti-NAFTA stance helped him win three of the first four GOP primary contests, most notably the New Hampshire primary. His success threatened to usher conservative protectionism into the party’s mainstream.

To defeat Buchanan, leading candidate Bob Dole turned to his campaign treasurer Robert Lighthizer (now Trump’s nominee to be United States Trade Representative). Lighthizer believed Dole needed to distance himself from his past support for free trade, stating “ ‘I would slash the ‘free’ out of free trade.’ ” Dole took Lighthizer’s advice by incorporating harsh words about free trade in his speeches. Meanwhile, Buchanan, facing a wide slate of opponents, and plagued by allegations of personal anti-Semitism, eventually lost the race.

For many years after 1996, conservative anger over NAFTA stayed on the fringes. While some in Congress continued to denounce free trade, right-wing economic nationalism resided more at the margins, with groups such as the ultra-right John Birch Society. Then came Donald Trump.

Trump echoed his predecessors’ anger, but altered their assignment of blame for agreements like NAFTA. Take this statement from Trump’s main speech on trade, from June of last year, which epitomizes his framing throughout the campaign: “Our politicians have aggressively pursued a policy of globalization – moving our jobs, our wealth, and our factories to Mexico and overseas,” he declared. Trump then continued that, “Globalization has made the financial elite who donate to politicians very wealthy. But it has left millions of our workers with nothing but poverty and heartache.” Here, politicians are proactive and corporations are reactive. Meanwhile, any sense that greed drives the advocacy of CEOs vanishes. This rhetorical trick allows Trump room to go after specific companies when it is convenient, but also allows room for Trump’s main energies to direct at government – leaving the private sector free to continue doing as it has done.

Given Trump’s subtle tacks in rhetoric, it is less surprising that his governance increasingly resembles the GOP mainstream. Examining how he constructs his outsider image will be crucial for understanding how we got here and where we are going, on trade and much more.