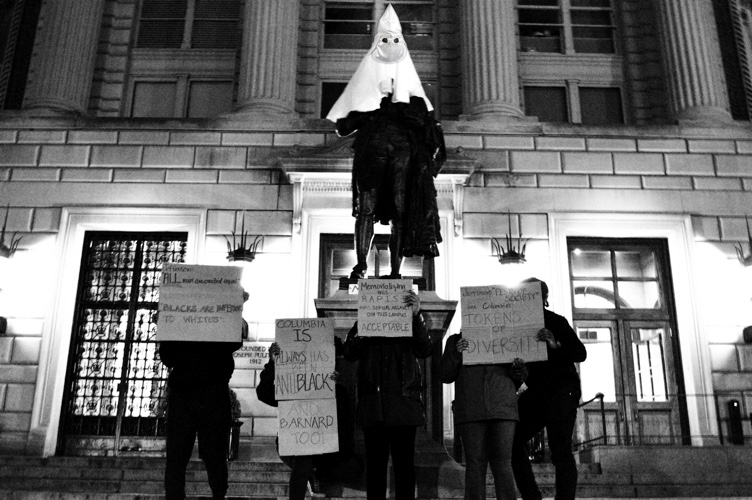 In his lifetime, Thomas Jefferson never stepped foot on this campus; however, 274 years postmortem, Columbia University continues to celebrate the legacy of a man who is the epitome of white supremacy. Columbia University boasts a “diverse” student body composed of 42% minorities and 5.4% self-identified Black and Native Americans; yet, the institution continues to honor Jefferson, who enslaved over 150 Black people and referred to them as not being deserving of the basic human rights he outlined in the Declaration of Independence. Instead, he regarded Black people as “pests of society” to be brutalized, raped, exploited, and monetized. Columbia University adheres to Jefferson’s brand of hypocrisy because it keeps a physical manifestation of the antithesis to Black women’s lives on the same campus that uses illusions of diversity to recruit students. Jefferson’s statue makes it clear that Black students are merely tokens of the university.

We, the Mobilized African Diaspora, reject the celebration of Thomas. By portraying him as a klansman, a direct representation of the ideals he believed in, we are contextualizing his racist and sexist legacy. Only when Jefferson’s face is hidden in this manner can the sinister reality of his actions and legacy be realized. Naturally, the University removed the display after half an hour, thus continuing its tradition of silencing Black voices.

The Mobilized African Diaspora rebukes the university’s failure regarding its promise to protect Black and brown bodies while it reveres a symbol of violence against Black and brown bodies and their consciousness. Jefferson may represent freedom for the white elites of his time, but for Black people, especially Black femmes, he embodied the same threat that the KKK poses to Black lives since their inception following the Civil War. Jefferson’s statue legitimizes the exploitation, neglect, and erasure Black people continue to suffer.

We are holding the University accountable for consenting to Jefferson’s lifelong vendetta against Black people. Venerating Thomas validates rape, sexual violence, and racism on this campus. Until Columbia and its administration acknowledges and addresses the implications of this statue, they fail to provide the safe and inclusive environment that is promised in the university’s official diversity statement. By commemorating the legacy of a man who dismissed the humanity of all Black people, Columbia continues to position itself as an anti-Black institution that upholds hypocrisy and white supremacy.

Let it be known that this action from MAD is not a singular moment — this is the beginning of a movement. Mobilized African Diaspora will continue to unearth and illuminate Columbia’s past, present, and future memorialization, facilitation, and manifestation of anti-Blackness. MAD will continue moving forward, demanding that Columbia reconstruct itself and address its anti-Blackness every step of the way.