The Trump Administration’s Problem with Watergate

Michael Koncewicz is the Cold War Collections Specialist at the Tamiment Library & Robert F. Wagner Labor Archives at NYU. He teaches history at St. Francis College and is currently working on a book on Republicans who said no to Richard Nixon. 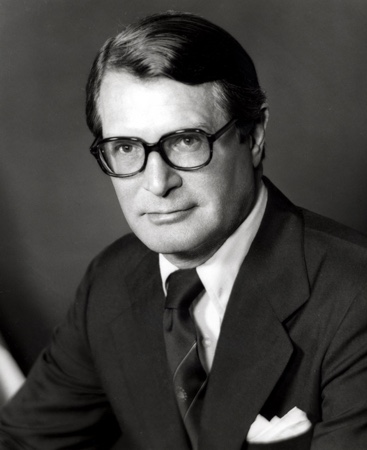 What does a portrait say? Jeff Sessions may have signaled more than he intended when he decided to redecorate the Justice Department’s 5th floor conference room. Sessions reportedly replaced the portraits of Democrats that were hung during the Obama administration with portraits of Republicans. The one portrait of a Republican that was on the wall during the Obama years was that of Elliot L. Richardson. As Attorney General, Richardson stood up to President Nixon and refused to fire the Watergate Special Prosecutor Archibald Cox. In what came to be known as the Saturday Night Massacre, Richardson’s resignation marked a turning point for Nixon who resigned less than a year later. During Watergate, Sessions was a young Republican who received his J.D. degree from the University of Alabama. In 2017, Sessions conspicuously decided to remove Richardson’s portrait.

Who was Elliot Richardson? Richardson was a Brahmin who in many ways represented the elite Ivy League establishment that Nixon detested. However, he was also a committed moderate, a skilled negotiator, and a beloved manager throughout his time in the Nixon administration. Whether as head of the Department of Health, Education and Welfare (HEW) or later more famously as Attorney General, Richardson took great pains to adopt a nonpartisan approach to civil service. His legacy as a good government Republican may partially explain the Attorney General’s decision, but this symbolic gesture also suggests that Richardson’s hero-like status is one that is not accepted by the Trump administration. While many rushed to compare the Attorney General Sally Yates’ recent decision to stand up to the President with the Saturday Night Massacre, we can learn more about our current political climate by looking at how Richardson became somewhat of a pariah within the GOP.

It was because of figures like Richardson that Nixon’s darkest impulses were contained. Instead of taking down portraits of figures who stood up to a disgraced President, more Republicans should look to his career as a source of inspiration in the age of Trump. In his previous Cabinet posts at the State Department and HEW, Richardson and his staff quietly battled with Nixon over several policy issues (Cambodia, busing, childcare), but in each case, they backed down from White House pressure. Despite his loyalty to the President, the White House saw Richardson as little more than a prestige pick to placate moderates within the GOP. Nixon rarely brought Richardson into his inner circle and often believed that he was too liberal on domestic issues and too soft when dealing with the administration’s opponents. “He’s more of a willow type. He waves in the wind,” said Nixon’s top domestic advisor John Ehrlichman in a meeting with the President who vehemently agreed with his assessment of Richardson. Despite his concerns about Richardson’s loyalty, Nixon selected Richardson to lead the Justice Department. As Watergate was becoming a national story, Nixon felt that Richardson’s reputation as someone who was “infinitely trusted” would provide cover for his administration. He convinced himself that based on the previous four years; Richardson’s independent streak could be controlled. Less than six months later, the President would regret that decision.

While Richardson’s staid speaking style was certainly a factor in explaining his declining influence following Watergate, his landslide defeat in the 1984 Republican primaries for an open Senate seat led many to conclude that there were more profound reasons for his diminishing stature. Richardson was initially seen as a clear favorite to win both the GOP primary and later the general election in his home state of Massachusetts, but Ray Shamie a conservative businessman would show that most Republicans had little regard for the man who said no to Nixon. Shamie depicted his opponent as an elite out-of-touch Washington insider who was wrong to criticize the party’s increasingly conservative platform. "Elliot represents the establishment," said Shamie in the summer of 1984, echoing the Nixon White House. "We have enough professional politicians . . . . He's a liberal Rockefeller-type Republican who would be very comfortable in the Democratic Party." In the end, Shamie beat Richardson by more than twenty points before losing to a young John Kerry in the general election. Years after his defeat, during a dinner with his former aide John Thomas Smith, Richardson was asked why he was still a registered Republican. “He didn’t have a good answer,” Smith later remembered.3

The overwhelming majority of the nation viewed Richardson’s resignation as an act of courage during the Watergate era. Sessions’s decision to take down his portrait suggests that the Trump administration may not agree. For Nixon, the Saturday Night Massacre proved to him that his suspicions about Richardson and the elite class were correct. During his final months in office, Nixon wrote about the “Richardson incident,” and concluded that “Establishment types like Richardson simply won’t stand with us when [the] chips are down.” It recently became public that Trump planned to display a laudatory letter he had received from Nixon in the Oval Office. Writing to Trump in 1987, Nixon lauded Trump for his recent appearance on the Phil Donahue show and encouraged him to run for political office. In 2017, that letter has a place in the White House, while a portrait of Elliot Richardson cannot be found in the Justice Department. While we do not know Sessions’ motives for taking down Richardson’s portrait, it is troubling that while the Trump administration has room for a letter from a disgraced President, good government Republicans will most likely continue to be absent.