What Would the Founding Fathers Make of Originalism? Not much.

Andrew Shankman is Associate Professor of History at Rutgers University-Camden. His book Original Intents: Hamilton, Jefferson, Madison, and the American Founding is being published by Oxford University Press in March 2017. 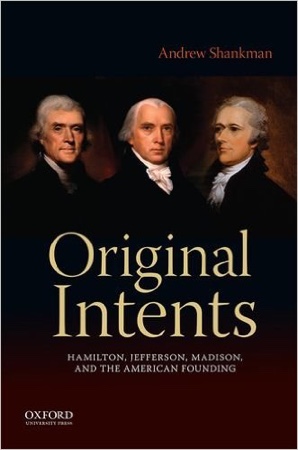 President Trump’s nomination of Neil Gorsuch to the Supreme Court likely ensures the continued significance of originalism for constitutional interpretation. Originalism is a complex legal theory. But boiling it down, it means that judges and lawmakers are bound by the meaning the words in the Constitution had when it was ratified. The original public meaning of those words cannot change. Pressing contemporary issues and compassionate wishful thinking cannot allow the words of the Constitution to justify actions that were not intended when the Constitution became the nation’s fundamental law.

Is the claim for an original intent historically defensible? Exploring the constitutional thought and actions of Alexander Hamilton, Thomas Jefferson, and James Madison shows that it is impossible to ascribe a single original intent to even so small a group of critically important founders. Instead, we find multiple original intents and competing meanings. With Hamilton and Madison, two of the most vocal members of the Constitutional Convention, we find, though in very different ways, endorsement of a living, expansive, and flexible Constitution, one that changes with the times and over time.

Testing originalism by investigating the first great constitutional conflict after ratification undermines the claim that the Constitution had one single and stable public meaning for the founding generation. In December 1790 Hamilton, the Secretary of the Treasury, issued a report calling for the national government to grant a corporate charter for a national bank. The bank would manage the large public debt and safely house federal tax revenue. Madison, a national congressman, and Jefferson, the Secretary of State, were appalled and insisted that the bank was unconstitutional because the Constitution did not grant the national government the authority to charter corporations.

Jefferson and Madison accepted that the necessary and proper clause did expand the government’s power beyond the enumerated powers, but only in a very limited way. Something was necessary, they argued, only if an enumerated power could not be carried out without it. Hamilton had argued in his initial report that the bank was useful because it would make tax collection easier. To meet the Jefferson/Madison standard for being necessary, Hamilton would have to show that the government would be unable to tax at all unless it had the bank, clearly a burden Hamilton could not meet.

In response, Hamilton argued that Jefferson and Madison did not understand the meaning of the Constitution; the general welfare clause was a freestanding grant of power. In addition, he insisted that they did not know what the word necessary meant. Hamilton explained that necessary “often means no more than needful, requisite, incidental, useful, or conducive to.” The meaning of necessary was expansive not restrictive. Clearly the Constitution’s original public meaning was to allow for vast implied powers that went far beyond the enumerated ones. To meet Hamilton’s standard of necessary, one merely had to show that the implied power—issuing a corporate charter for the bank—would be useful for carrying out the enumerated power to tax, and that the implied power was not forbidden by the Constitution. In effect, because of the disagreement over how to define the word necessary, Jefferson and Madison were saying that the government could not charter a bank because the Constitution did not expressly grant it the power to do so, while Hamilton was saying the government could charter a bank because the Constitution did not expressly deny it that power. Modern-day originalists seeking the stable, consensual meaning the founding generation ascribed to the words of the Constitution will find that even a seemingly simple word such as necessary could produce rival definitions that made for completely different constitutions.

As Hamilton triumphed and the government created the bank, Madison took to the newspapers to mobilize opposition. In a series of essays, he argued that the people themselves perpetually possessed sovereign power, which was why they had been able to ratify the Constitution in the first place. The Constitution was the people’s instrument for continuing to express their sovereignty. What the Constitution meant, Madison had come to believe by 1792, depended on the fundamental values of the sovereign people and the meaning they attached to the instrument they had created. But sovereignty did not only reside with the people who happened to be alive in 1788 when the Constitution became the nation’s fundamental law. The people were perpetual, and so was their sovereignty. For Madison, the public opinion of the sovereign people was the final arbiter of the Constitution’s meaning, for “public opinion sets bounds to every government, and is the real sovereign in every free one.” Madison had come to believe that all “power has been traced to public opinion. The stability of all government and security of all rights may be traced to the same source.”

Madison did not believe that the majority could do whatever it wanted. In the essays that he wrote for the Philadelphia National Gazette, Madison stressed that public opinion emerged from a lengthy and thoughtful conversation stimulated by sober, judicious thinking. That conversation had to be guided by virtuous statesmen who educated citizens to better understand the public good. But in the end, the Constitution was the mere instrument of the people’s perpetual sovereignty. It had to reflect their public opinion, their popular sense of their most fundamental values and ideals. It was the “people who are the authors of this blessing,” and they “must also be its guardians,” wrote Madison. Majority public opinion was the final arbiter of constitutionality, and the people’s “eyes must be ever ready to mark, their voice to pronounce, and their arm to repel or repair aggressions on the authority of their constitutions; the highest authority next to their own because the immediate work of their own.”

Looking back at the founding, the first great constitutional conflict, and the interpretive frameworks of two of the most significant founders, can only make modern originalists uneasy. Words such as necessary, defined so dramatically differently, made for multiple meanings and mutually exclusive original intents. Hamilton’s original intent to have a top-down and expansive interpretive framework demanded that statesmen have the authority to define in perpetuity useful policies as necessary, as changing times demanded flexible responses. Madison’s bottom-up interpretive framework demanded that the perpetually sovereign people maintain their right through time to be the final arbiters of constitutional meaning through popular politics and the thoughtful expression of public opinion.

Going back to the founders, we find them telling us to focus on our twenty-first century problems and to stop using them as an excuse for our inaction. The stable original intent we can most likely take from them is that we all must be keenly alive to our duty to be thoughtful, compassionate citizens. It is in Madison’s essays written in the early 1790s that we find the richest resonance of his powerful statement at the Constitutional Convention: “In framing a system which we wish to last for the ages, we should not lose sight of the changes which ages will produce.”