Patrick Lacroix is a Ph.D. candidate at the University of New Hampshire. His dissertation, titled “John F. Kennedy and the Politics of Faith, 1960-1963,” connects Kennedy’s presidency to contemporary shifts in American religious thought and activism. 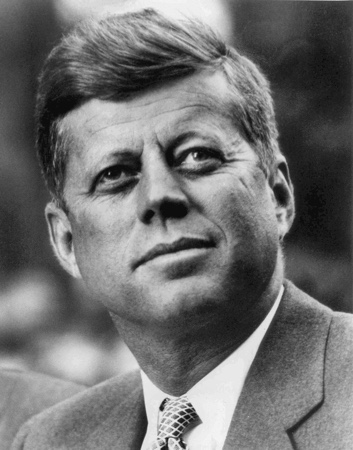 One hundred years ago, the United States went to war. On April 6, 1917, Congress responded to the notorious Zimmerman Telegram and continued depredations on merchant ships by adopting a resolution of war against Germany. Thus began the march to a Western victory on the battlefields of Europe; thus, also, opened a dark chapter in this country’s history. New agencies and new legislation severely curtailed civil liberties and contributed to a repressive cultural regime.

Such was the context in which John F. Kennedy entered the world, on May 29, 1917. As we reach the hundredth year of his birth, it seems natural, as with all such anniversaries, to pause and consider what remains of Kennedy’s life and legacy. With Kennedy more than any other American president, the exercise proves daunting. Few Americans have marked our collective consciousness so powerfully relative to the time they spent in the national spotlight, but it is no small task to assert the broader significance of Kennedy’s thousand days in office in the modern American history classroom.

There is, of course, the soaring rhetoric, the Peace Corps, the Bay of Pigs catastrophe, and the Cuban Missile Crisis. There are lingering “what-ifs” concerning American policy in Southeast Asia, had Kennedy lived. Alas, in college curricula designed for millennials, to whom the name means little, Kennedy’s presidency feels like an obligatory but brief aside in the march towards the crises of the late 1960s and 1970s. The significance of Kennedy’s presidency—barely longer than Warren Harding’s and perhaps destined to a similar fate in history textbooks—has begun to fade. Still, there is cause for hope. By finding a broader canvass on which to paint this compelling figure, we may find that the full life of the first Catholic president offers a valuable glimpse into the American century, the early 1960s, and our present politics.

By Kennedy’s third birthday, the United States had experienced the disturbing effects of “one-hundred-percent Americanism.” During the First World War, federal agencies monitored ethnic communities and identified patriotism with the white, Anglo-Saxon, and Protestant mainstream. As peace returned to Europe, wartime anxieties broke through in a wave of anti-Communist hysteria, which further questioned the attachment of ethnic minorities to their adoptive country. Kennedy’s childhood coincided with the rapid advances of the Ku Klux Klan in northern and western states. The racist and xenophobic organization made strides by targeting Catholics, Jews, and Eastern and Southern Europeans as well as African Americans. At age eleven, Kennedy witnessed New York Governor Alfred E. Smith’s nomination as the Democratic Party’s presidential candidate, the first Catholic to top a major-party ticket. He also witnessed Smith’s bruising defeat. Smith won eight states. If continued prosperity, the issue of Prohibition, and the popularity of his opponent all contributed to Smith’s loss, concerns about his ability to fulfill the demands of the presidency on account of his religious affiliation also marked election-year debates.

We easily forget, when thinking of charming, energetic President Kennedy, of the national hopes that he expressed, that this was the prevalent cultural climate of his youth. His father’s growing fortune and the Irish Catholic citadel in Boston—his maternal grandfather had been mayor—helped to insulate John F. Kennedy from the worst of American ethnic nationalism and religious bigotry. But, as we know from subsequent events, he could not escape it. Nor could he escape the international turmoil and resentments flowing from the First World War. At Harvard, John dedicated his senior thesis to the march toward renewed conflict. He joined the U.S. Navy Reserve and thus his generation’s greatest battle. He met the Second World War in the South Pacific, where he saw its brutality. And he knew personally that the Allied victory was won at a steep price. His older brother Joe, a pilot, died accidentally on a bombing run in Europe in 1944.

This too is easily forgotten, that beneath the patina of fortune and fame, wit and charm, lay personal suffering. Joe didn’t come back. Neither did sister Rosemary, in a sense; a 1941 lobotomy left her mentally impaired and she was immediately institutionalized. A plane crash killed the next sister, Kathleen, or Kick, in 1947. John, who had faced a series of health emergencies as a teenager, returned from the war with a bad back. Health problems continued to plague him in office. At last, the death of their son Patrick in August 1963 was a particularly heavy blow to both John and Jacqueline.

The end of the Second World War announced a second Red Scare. The election of 1946 brought a number of young veterans to the halls of Congress. Among them were John F. Kennedy, Richard Nixon, and Joseph McCarthy. The last two in particular made use of their positions to insist on the severity of the Soviet threat. They tarred political opponents by portraying them as domestic enemies. They nourished fears and suspicions that imperiled labor unions and civil rights activists, inaugurating an ideological “one-hundred-percent Americanism.” This undiscerning anti-Communism frustrated the Kennedys. In 1952, Joe Kennedy Sr. reached out to McCarthy to keep him out of his son’s Senate race. In 1954, when John scheduled an appointment for back surgery, the operation fell shortly before the Senate voted to censure McCarthy, so that hospital convalescence kept the future president out of the controversy.

There was frustration in another regard. As a congressman from Boston and a Massachusetts senator, John F. Kennedy’s Catholic faith raised no questions. The national stage was far different. In his presidential bid, Kennedy had to answer liberals who believed that an accretion of Catholic power would threaten the separation of church and state and religious freedom. Would he fulfill his oath of office and protect the Constitution? Evangelicals and fundamentalists had their own concerns, which were anchored in the theological legacy of the Reformation. Both camps were wont to compare Catholicism to the threat posed by international Communism, no small claim at the height of the Cold War. Kennedy resented having to defend his church’s history and doctrines—a game he largely avoided. Even more so, like his father, he resented the statements of certain Catholic bishops, which inflamed Protestant opinion and seemed intended to embarrass his campaign. He offered assurances that were largely those of his predecessor, Smith, in 1928. That Kennedy won while Smith lost should not obscure the persistence of religious bigotry through the election year and beyond. It was Kennedy’s tact and even-handedness in office, rather than his campaign pledges, that helped to quell longstanding prejudice. There was no controversy and indeed barely any discussion of the issue when the Republican Party nominated a Catholic as its vice-presidential candidate in 1964.

Kennedy upheld the separation of church and state. He resisted Catholic voices calling for federal funds for parochial schools. He also demanded that Protestants live up to their own injunctions concerning the establishment of religion. Protestants advocated a strong “wall of separation” in the interest of precluding Catholic influence; with no sense of inconsistency, a great many opposed a Supreme Court ruling that barred their own religious exercises in public schools. Kennedy also inspired interdenominational alliances. He cobbled alliances of liberal Catholics, Protestants, and Jews in support of the administration on the two greatest challenges of his presidency: the Cold War and racial injustice. Unwittingly, he thereby laid the basis for a conservative backlash that would also be interdenominational.

With his nuclear test ban treaty and proposed civil rights bill, both of which came in the last six months of his life, Kennedy offered his ultimate answer to the leading foreign and domestic issues of the day. More than his firm but cautious leadership during the Cuban Missile Crisis, we should remember his desire to prevent such situations from recurring. He did not channel McCarthy, he did not curse the country with a third Red Scare. He sought to move the United States and the Soviet Union alike to a peace that would serve all people, no matter the regime under which they lived. And as we remember his incremental approach to civil rights and his eventual call for comprehensive legislation, we should take note that Kennedy was the first president to deem racial injustice a moral issue. In the process he reversed the federal government’s fundamental stance on civil rights. African Americans had not had such an ally in the White House in nearly a century.

The mythmakers who spun fawning accounts of Kennedy after his assassination were greatly aided by what followed: the Vietnam debacle, economic crisis, the Watergate scandal, the culture wars. The Kennedy mystique seemed likely to endure. A new generation of liberal activists and the New Right had their turn, however. In their hands, the thirty-fifth president became an ineffective legislator, a weak counterpart to the Russian leader, a temporizer on racial equality, and a man of little moral sense who failed to match with deeds his soaring rhetoric—in a fascinating twist, criticisms already levelled against the current president. The search for an honest depiction of Kennedy’s presidency, as well as its significance, remains.

Somewhere beneath the polarized representations of the early 1960s lies something important that we may only glean by understanding that which came before, rather than what came after. The events of Kennedy’s lifetime—the tumult of two world wars and two waves of anti-Communist hysteria, on-going religious and racial prejudice, the threat of nuclear annihilation—help to crystallize the new departure that his presidency marked. Understanding the fragility and failings of humanity, John F. Kennedy reacted to a world riven with strife, a country riven with fear and hatred. As with the Peace Corps, he sought to channel the best in American society. Perhaps, in the 1960s, we would at last realize the American promise.

That we did not meet that lofty ideal—at least not entirely—takes nothing from his efforts. It is but a reminder of the bully pulpit’s limits. A president needs active citizens willing to take on their share of the burden. We too have responsibilities; we too must live up to the country’s stated ideals.

We now live in the age of Trump, a charismatic northeasterner who was born to wealth. The incoming president has the reputation of a womanizer; he does not speak the language of religious faith. An unpalatable nominee to some within his party, he won a closely disputed general election and has proven to be a disruptive political figure. That all of these traits were also Kennedy’s invites renewed attention to the thirty-fifth president, who symbolized his times but also transcended them. Perhaps, indeed, by returning to Kennedy’s life, we will find inspiration for a new departure in our day, one that relegates old animosities to the past and looks toward a just society and a peaceful world.