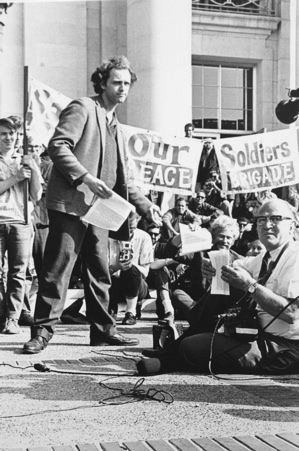 Mario Savio on Sproul Hall steps at UC Berkeley in 1966.  By Mjlovas, Wikipedia.

Last week, President Donald Trump seemed to be trying to channel Mario Savio (the leader of Berkeley’s famed Free Speech Movement of 1964). Where Savio, from the Steps of Sproul Hall, in his most famous speech, threatened on December 2, 1964 to bring the university to a grinding halt – via mass civil disobedience – if its administration did not end its restrictions on free speech, Trump tweeted a threat that “If U.C. Berkeley does not allow free speech and practices violence on innocent people with a different point of view - NO FEDERAL FUNDS?” The occasion for Trump’s threat was the cancellation of the hateful alt right provocateur Milo Yiannopoulos’s speaking engagement at UC Berkeley after violent protests erupted, yielding arson and broken windows in Berkeley’s Martin Luther King, Jr. Student Union building.

Unlike Savio, who cared so deeply about free speech that he disrupted his college education and his career battling for it and – along with other Free Speech Movement leaders – spent months in jail for his role in the FSM’s culminating free speech sit-in, Trump has sacrificed nothing for free speech and has demonstrated no commitment to that freedom. In fact, Trump has repeatedly been complicit in ugly free speech violations. During Trump’s presidential campaign he urged the removal of protesters from his rallies, inspiring violence against these dissidents, and waxed nostalgic for the days when they’d have been carried away on a stretcher. Trump even offered to pay for the defense of one of his thuggish supporters who sucker punched a protester at one of his rallies.

When you judge Trump on his record, it is evident that his free speech position is similar to that of those who used violence to disrupt the Yiannopoulos event at Berkeley. That position is "free speech for me, but not for thee.” For the window breakers and arsonists, Yiannopoulos was too bigoted and radically right wing to be allowed to speak, whereas for Trump, dissenters at his rallies were too opposed to his bigotry and too liberal to be allowed to speak or even to remain at his rallies. Trump made an issue of the Yiannopoulos disruption not because he cares about free speech, but because the speaker whose rights had been infringed was a fellow right winger, affiliated with the Breitbart alt-right media site that he loves and that loves him.

Trump’s tweet is confused since in it he accuses UC Berkeley of not allowing free speech and practicing violence on “people with a different point of view.” To the contrary, the UC administration took a strong free speech position, refusing to cancel the Yiannopoulos event despite a faculty open letter (signed by close to 100 professors) and student activists’ urging that the speaker be banned from campus. Far from “practicing violence” the administration only cancelled the Yiannopoulos event after the eruption of violence endangered safety on campus. The threat to cut federal funding to UC Berkeley on account of a free speech disruption that its administration opposed and violence that it sought to prevent is completely illogical. Worse, it calls to mind the covert threats that President Richard Nixon made (caught on the Nixon tapes and revealed in the forthcoming book of historian Michael Koncewicz) to cut off funding to MIT and other leading universities out of anger over their antiwar protests. Violating federal contracts a la Nixon and Trump as part of a political vendetta is both illegal and immoral.

However, there's a lesson in this that progressives would do well to heed.

Appalling as Trump’s hypocrisy on free speech is, his Berkeley tweet and Savio masquerade demonstrate that when the Left advocates the banning of a speaker or disrupts a campus speech it not only tramples the legacy of the Free Speech Movement, but surrenders the moral high ground so completely that it puts itself in a position to be lectured on free speech by its nemesis in the oval office.