Donald Trump Rediscovers Franklin Roosevelt’s Forgotten Man—Or Is It Someone Else?

by David Davenport and Gordon Lloyd

David Davenport is a research fellow at the Hoover Institution. Gordon Lloyd is a senior fellow at the Ashbrook Center and Dockson Professor Emeritus at Pepperdine University. They are coauthors of the new book, "Rugged Individualism: Dead or Alive?" (Hoover Press, 2017). 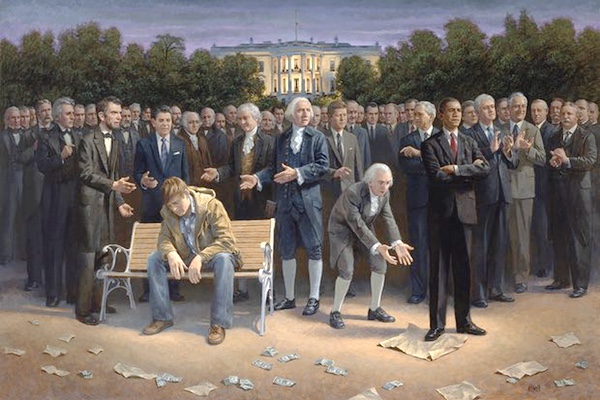 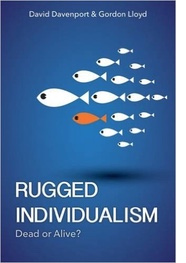 In his inaugural address, President Trump doubled down on this theme, saying “the forgotten men and women of our country will be forgotten no longer. Everyone is listening to you now.” He described them as holding a “crucial conviction that the nation exists to serve its citizens,” not the politicians and elites of Washington. What they want, Trump said, is “great schools for their children, safe neighborhoods for their families and good jobs for themselves.” He called these “just and reasonable demands of a righteous people and a righteous public.”

Over 80 years ago, another wealthy New Yorker elected president with populist support, Franklin Roosevelt, introduced “the forgotten man” on the national stage. About a month after his inauguration, Roosevelt delivered a radio address—a 20th century version of Twitter—in which he said: “These unhappy times call for the building of plans that rest upon the forgotten, the unorganized but the indispensable units of economic power for plans … that build from the bottom up and not from the top down, that put their faith once more in the forgotten man at the bottom of the economic pyramid.”

Roosevelt wished to replace an American icon, the rugged individual, with a new one, the forgotten man. For Roosevelt and the Progressives, rugged individualism only existed on Wall Street, where the business titans ruled and market forces had failed to protect Americans from economic disaster. Rugged individualism, Roosevelt said in a May 22, 1932 speech at Oglethorpe University, results in a lot of “haphazardness … gigantic waste …. superfluous duplication … dead-end trails … and waste of natural resources.” Roosevelt’s close advisor and Secretary of the Interior Harold Ickes concluded that “we have turned our backs for all time on the dreadful implications in the expression ‘rugged individualism.’”

Instead the forgotten man, the man at the bottom of the economic ladder who needed help and support from the government against the vagaries of the market and the power of the business titans, would become the focus of federal policy. As New York Times columnist Timothy Egan would say 76 years later, with that radio talk lifting up the forgotten man, Roosevelt “found his theme, and the Democratic Party found its agenda for the next half-century” (or longer, we would argue).

But the origin of the term “forgotten man” was different from Roosevelt’s understanding. Yale professor William Graham Sumner coined the term to describe the man who pays for someone else’s reforms that, in turn, benefit yet another person. Sumner described him this way: “The Forgotten man … works, votes, generally he prays—but he always pays.” Sumner’s more libertarian take on the forgotten man opposed special interest legislation, such as earmarks or targeted tax relief or protectionism, that benefited only a narrow group. In a sense, his forgotten man was more like President Richard Nixon’s “silent majority,” people who paid for the government but were unhappy with how things were going. But Roosevelt had a larger platform than Professor Sumner and it was his forgotten man, at the bottom of the economic pyramid, who is best remembered from history.

Trump’s forgotten men and women need new government policies, but what kind? Does Trump want to return more power to rugged individuals and to state and local governments? Or is he more of a big government conservative who would keep the federal government large and active, but in favor of different policies to benefit the forgotten middle class? At this point, we simply don’t know the answer to this question. On one hand, Trump’s appointment of traditional conservatives to his cabinet and administration might suggest a reduction in the federal role, for example in education and the environment. But Trump’s stated desire to spend lavishly on infrastructure suggests big government and an even bigger federal debt. Which of these Trump’s will win out? Only time will tell.

In the end, Trump’s forgotten men and women sound more like, but not just like, Professor Sumner’s origin of the term. They are, like Sumner’s forgotten man, those who pray and always pay, but for whom the government has not by and large worked. In Trump’s view, the special interests that Sumner abhorred have gained more from government policy than the solid, tax-paying middle class.

Over 80 years, the primary rival to the forgotten man has been the rugged individual, who has been in constant retreat. We wish Trump’s revival of the forgotten men and women might mean room for greater individualism, but making America great again isn’t the same as making the individual central again. Trump is no Ronald Reagan, who said in his first inaugural that government was not the solution to our problems, government is the problem. Trump is no Herbert Hoover, who argued that the American system of rugged individualism need not be undone in order to deal with the economic crisis of the Depression.

Are Trump’s forgotten men and women more like Sumner’s or Roosevelt’s, or might they even be first cousins to Herbert Hoover’s rugged individual? So far Trump seems to be content with an unsatisfying mix, but time and policy will tell.