How Is Emmett Till Remembered?

by Dave Tell and Patrick Weems

Dave Tell is Associate Professor of Communication Studies at the University of Kansas and a Fellow of the National Endowment for the Humanities. He is finishing a book on how (and for whom) Till’s murder is being remembered in the Mississippi Delta. Patrick Weems is the Director of the Emmett Till Interpretive Center in Sumner, MS. The Emmett Till Memory Project is a collaborative initiative between Patrick Weems, Dave Tell at the University of Kansas, Davis Houck at Florida State, and Christian Spielvogel at Penn State. 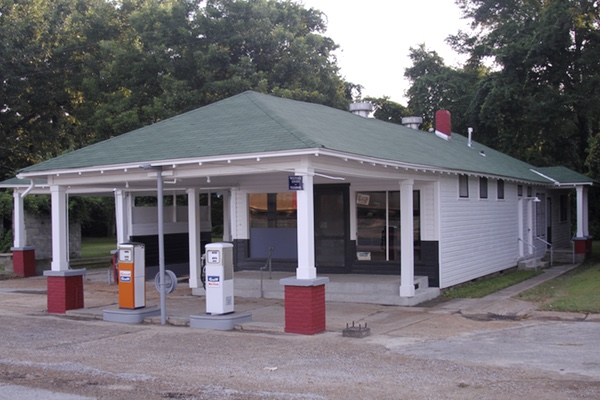 Photograph by Pablo Correa, photographer for the Emmett Till Memory Project

In 2011, fifty-six years after the lynching of Emmett Till, the town of Money, Mississippi was awarded a Civil Rights Historical Sites grant. Initially funded in the amount of $152,004.80, the grant went not to Bryant’s Grocery & Meat Market, the site where Till whistled at Carolyn Bryant and the only place in town with civil rights history. Rather, it went to Ben Roy’s Service Station—a gulf-and-canopy style filling station 67 feet south of Bryant’s Grocery. The thousands of tourists who flock to Money each year to see an iconic civil rights site must be confused. Why is a service station with no civil rights history beautifully restored (with a Civil Rights Historical Sites grant, no less) while Bryant’s Grocery is in such disrepair that the county has erected plastic orange fencing to protect visitors from falling bricks?

The state archives offer a fascinating explanation. The Mississippi Department of Archives and History (MDAH) funded Ben Roy’s for two reasons. First, they argued that Ben Roy’s was a civil rights site because the Till case was discussed from the portico of the filling station. A letter of support filed with the MDAH even claimed that the gas station was a civil rights site “on par with SNCC headquarters.” Second, they argued that Ben Roy’s could reframe the memory of race relations in the 1950s. Even at the height of segregation (when Ben Roy’s boasted two sets of bathrooms on its north side), the grant application suggested that blacks and whites mingled socially on the front porch and shared the jukebox after a long day in the fields. While the ruins of Bryant’s Grocery are an undeniable reminder of 1950s violence, Ben Roy’s, the application suggested, could bear witness to a “more comprehensive” racial history. Since the restoration was completed in 2014, Ben Roy’s has been reframing the racial history of the Mississippi Delta. Despite promises made in the application, the restoration eliminated the “colored bathrooms” and made no reference to Till’s murder. It just stands there, beautifully and nostalgically, providing evidence for those who want it that the 1950s Mississippi Delta was, if sometimes violent, also marked by sites of racial harmony.

We begin with this anecdote because it dramatically illustrates one of the central challenges of remembering Emmett Till: Whose story gets told? While this is a problem that haunts all commemorative work, it is particularly acute in this instance. While we know that Till whistled on August 24, 1955 and that his body was recovered on the morning of August 28, there is no definitive record of what happened in between. Even the most basic questions are the object of historical conjecture. Where was Till killed? How many people were complicit in the murder? Did the affair inspire Rosa Parks?

The inability to provide firm answers to these questions has generated a cacophony of commemorative expressions. Indeed, to drive across the Mississippi Delta today is to be confronted with a massive but ideologically inconsistent commemorative infrastructure. The signs, museums, trails, nature walks, and interpretive centers that now pepper the Delta landscape have been initiated by different people, funded by different groups, organized by competing nonprofits, and, unsurprisingly, bear witness to different versions of Till’s story. On Thomas Street in downtown Glendora, MS, for example, there are two historical markers about 500 feet from each other. They tell mutually exclusive versions of Till’s story. If the sign that marks the site of J. W. Milam’s home is correct, then the sign just to its west that marks the site of King’s Place Juke Joint cannot be correct.

The Emmett Till Memory Project is a creative attempt to negotiate this problem. A collaboration between scholars from across the country and the Emmett Till Interpretive Center in Sumner, MS, the project uses digital tools — including a website, GPS-enabled smartphone app, and kiosk technology — to commemorate the murder of Emmett Till.

The heart of the project is the smartphone app. GPS technology allows us to calibrate the history of Emmett Till to a user’s location in the Mississippi Delta. Wherever a user happens to be standing, he or she will get the history of Emmett Till from the perspective of that place. For example, if a user is standing in Money, Mississippi, she will learn about Till’s fated whistle and the restoration of Ben Roy’s. By contrast, if the same user is standing in Mound Bayou near the offices of T.R.M. Howard, she will learn about the important role played by the black press in uncovering the murder site and finding witnesses. Beyond the particulars of these examples, the GPS technology is designed to emphasize the fragility of memory and how it seems to shift with every telling. The ETMP is not settling, once and for all, the contested story of Till’s lynching. Rather, it is preserving multiple stories, tying them to particular geographic locations, and letting the user discover them as she moves across the Delta.

Simply by moving around the Delta a user of our app will be confronted with competing stories of Till’s death—some of them in conflict with each other. This is important because it draws attention not simply to the facts of 1955, but also to what has been done with those facts since 1955. The ETMP is designed not simply as a refresher course for memory, but as a lesson in the politics of commemoration. It will teach the user, not simply where Till was killed or his body was recovered, but how, why, and through whom we think we know the answers to these questions. It uses the geography of the Delta, the distances between memory sites, and the mobility of the tourist to capture the contingency of history and the influence of rhetoric in the stabilization of the past.

For Patrick Weems, Director of the Emmett Till Interpretive Center, the importance of the ETMP is how it helps him—and the Center—use the history of Till’s murder for racial reconciliation in the present. By drawing the story forward, and by refusing to allow Till’s murder to be confined to 1955, the ETMP helps make Till’s murder relevant for a new generation of Delta youth who still find themselves, in 2017, confronted with the contested (and suddenly lucrative) legacy of Till’s murder.

While a prototype of the ETMP is live, we are currently seeking funding to professionalize its appearance and functionality. If funded, the Mississippi Development Authority will list the ETMP alongside the state’s other cultural heritage tourism projects: the Freedom Trail, the Blues Trail, and the Country Music Trail.

On January 12, 2017, the ETMP got a big boost. The National Park Service awarded half-a-million dollars to the Emmett Till Memorial Commission to install interpretive exhibits in the building where Till’s killers were acquitted. Although the building remains an active courthouse and for this reason cannot house physical exhibits, digital commemorative displays are allowed. These will include concealed/retractable projectors, screens, speakers, sensors, and a touch-screen kiosk at which visitors can learn the significance of Till’s murder and the role of Tallahatchie County in the civil rights movement. The ETMP has been selected to provide the content for these multi-media displays. The 3,500 visitors who visit the Courthouse each year will now be able to interact with Till’s story in the courthouse, learn about the various histories of his murder, and head out into the Delta to experience the sites for themselves.