Bob Buzzanco is a professor of history at the University of Houston and author of several books and articles, including "Masters of War: Military Dissent and Politics in the Vietnam Era." This article was first published on Professor Buzzanco’s website. 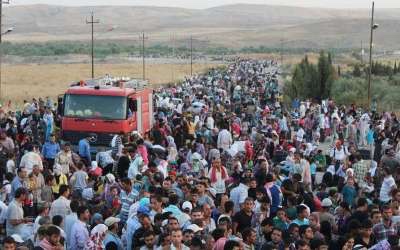 Not since I had to remember and recite “The New Colossus” in elementary school have I seen so many references to Emma Lazarus’s poem on the Statue of Liberty as in the past week. “Give me your tired, your poor, your huddled masses . . .”   Those words accompany strong and much-needed outrage over the Trump administration memorandum to significantly reduce, and in some cases ban altogether, immigration from certain Middle Eastern countries—mostly those where the U.S. wars unleashed in 1991 and 2003 have created refugee crises and where Trump and other U.S. oligarchs do not have business interests. (Particularly noticeable in its absence is Saudi Arabia, one of the more repressive places in the world and home of 15 of the 9/11 terrorists, but a huge investor in and arms buyer from the U.S.).

But Lazarus’s words and media outcries belie the uncomfortable reality of the way the U.S. has dealt with refugees throughout its history. The wretched teeming masses have always had trouble getting into America, and particularly so when they emigrated from countries where race, ethnicity or politics conflicted with U.S. economic interests, ideology or policy.

Immigrants to American have rarely been met with open arms. Throughout the 18th and 19thcenturies Nativists created policies that made it difficult for Catholics, Irish, Germans, Jews and other non-Anglo Saxon groups to get in to the U.S. By the later 1800s, more immigrants came to America, as the emerging industrial Capitalist economy required immense numbers of workers. Still, Woodrow Wilson, in many ways the Godfather of modern Liberalism, welcomed the “sturdy stocks” of northern Europe rather than the “more sordid and hopeless elements which the countries of the south of Europe were disburdening . . . men out of the ranks where there were neither skill nor energy nor quick intelligence” (I’m thinking my four grandparents who emigrated from Sicily in Wilson’s time fit that description for him).

Wilson’s views were mainstream. Theodore Roosevelt used terms like “mick,” “dago,” and “chink” to describe ethnic groups. And official policy reflected those views. In 1882 Congress passed the Chinese Exclusion Act to suspend Chinese immigration for ten years and exclude them from naturalization (they remained ineligible for citizenship until 1943). In the aftermath of the 1882 act, other groups like Middle Easterners, Hindus, and Japanese were targeted. In 1906, the U.S. and Japan had a diplomatic skirmish when California schools ordered Japanese students to be taught in segregated schools. Throughout World War I nativist sentiment soared and immigrants from Germany and then Italy (the home country of anarchists like Sacco and Vanzetti) came under scrutiny and attack, and in 1924, in the Johnson-Reed Act, Congress restricted immigration from all nations and excluded Asian newcomers.

The best-known immigration crisis of the 20th Century of course, came with the Holocaust of World War II, with Hitler’s attempt to create a “pure” race of Germanic peoples by eliminating “undesirables” like Communists, Gypsies, Homosexuals, Jehovah’s Witnesses, Freemasons, the disabled, and of course Jews. German attacks on Jews, most notably Kristallnacht, or the “night of broken glass,” a series of attacks on Jews and their stores, homes, and synagogues in Germany and Austria in November 1938, gained significant attention. Likewise, many were aware of Nazi concentration camps, areas where Jews and others were sent to live in prison-like conditions for some contrived misdeeds they had committed. After Kristallnacht, for example, the Nazis put 30,000 Jews in camps.

Once the invasion into the Soviet Union stalled in December 1941, Hitler began to intensify his repression and order the final solution as an attack on both Jews and Communists. FDR and other allied leaders were aware of the plight of European Jews under Nazi control by mid-1942, but did little to confront or stop it. In some cases, the U.S. turned away ships carrying Jewish refugees, forcing them to return to Germany and in some cases die in the holocaust. In fact, it took FDR about 18 months, until January 1944, to establish a War Refugee Board to coordinate the rescue of Jews escaping Germany, and even then it took in only 132,000 people fleeing the Nazis, just 10 percent of the quota allowed by law.

FDR argued that the best way to save Jews was to defeat Germany on the battlefield but Jewish leaders in the U.S. pressured him into creating the refugee board, which was ordered to “rescue the victims of enemy oppression who are in imminent danger of death and otherwise to afford such victims all possible relief and assistance consistent with the successful prosecution of the war.” The war, however, was more important and took priority over saving those under Nazi control.  In the same way, the fight against Japan led the liberal FDR administration to put Japanese-Americans, citizens, in concentration camps.

From World War II onward, immigration policy often reflected larger political positions. Refugees who were “fleeing Communism” had an easier time getting into and being naturalized than citizens from nations that didn’t have such geo-strategic importance while trade penalties were placed on the Soviet Union due to its restrictions on the emigration of Jews from Russia. In the 1980s, the Reagan administration, waging war against several Central American liberation movements who were trying to unseat U.S.-backed dictators, virtually eliminated immigrationfrom Guatemala, El Salvador, and Nicaragua, while 100 percent of Cubans were given refuge. In response, churches and political groups began providing sanctuary for Central Americans fleeing war zones in their home nations, an issue rising again as many cities are declaring themselves sanctuaries for Middle Eastern refugees.

Immigration discrimination was a bipartisan program too. Although candidate Bill Clinton criticized President George H.W. Bush for his policy on Haitian refugees—it was “cruel” and “immoral” he said—President Bill Clinton announced that Haitians who fled after President Jean-Bertrand Aristide (the most democratic leader in modern Haitian history) was deposed would be intercepted and returned (fear that many of these Haitians had AIDS was a major public rationale), and when that didn’t work, sent tens of thousands of them to Guantanamo and after Aristide came back to power in 1994, forced them all back to Haiti.

And any discussion of repressive U.S. refugee policies must include the work of Barack Obama, currently on the fast-track for Liberal canonization, whom between 2009 and 2015 removed over 2.5 million people via immigration orders and more if you include people who “self-deported” or were turned away or sent home by U.S. Customs and Border Patrol agents, thereby earning the deserved title of “Deporter-in-Chief.”

Donald Trump undoubtedly poses a great threat to refugees, an already horrific human rights crisis will only worsen as the American president (and other right-wing leaders in Europe)  escalate their campaign against Middle Easterners who have been run out of their countries by war, calling them would-be terrorists without any evidence and denying them basic human rights while they suffer in refugee camps.

Trump, however, isn’t unique.  His attack on people forced from their own land–weak, hungry, often without family, facing brutal conditions or even death–continues a long-time  tradition.  While we like to cite Emma Lazarus’s poem, the reality is that a “Keep Out” sign is probably a more apt symbol of U.S. immigration policy, with Trump as the most recent White House Rottweiler guarding the gates.