Professor Watchlist Is Keeping an Eye on You! 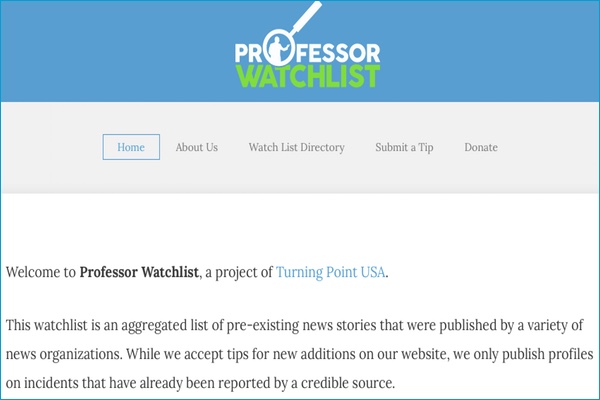 “Those who cluster with voices like their own will never change.” - Greg Hampikian, professor on the Professor Watchlist

Turning Point USA (TPUSA) is a non-profit organization founded in 2012 by Charlie Kirk, a conservative youth at just 18 years old. TPUSA is well funded by donors; in 2014, it raised $1 million to create an organization that caters to young, conservative students. One of its subsidiary projects is Professor Watchlist, which gained over 500,000 views in its first month. Its mission is to gather information in order to “expose and document college professors who discriminate against conservative students and advance leftist propaganda in the classroom.” However, contrary to its mission to protect students in the classroom, numerous professors made the list for just one or two published articles outside the classroom.

At present its directory holds over 150 names and continues to grow. Fewer than 14 percent of the entries feature history professors; the majority of names come from Women and Gender Studies, Political Science, Sociology, English, and various other departments. Professors in the directory are from all departments ranging from humanities to math and science. For each entry, the Watchlist provides a photo, contact information, and brief description outlining the professor’s “offense.” Alleged offenses include voicing opinions on gun control, feminism, and a variety of other politicized issues. The evidence is frequently drawn from conservative news sources like Campus Reform and Discover the Networks. “If the Professor Watchlist were a research paper, I’d give it an F,” says Peter Dreier, politics professor at Occidental College. According to Dreier, some claims about him are true, while others are a “complete fantasy.” Drier has no doubt that charges against other professors are “also false and misleading.”

Some professors in the database object that they are being singled out for what they have said or published outside the classroom. Greg Hampikian, a professor of biology and criminal justice at Boise State University, told HNN in an email that he was included because of an op-ed article published in the New York Times. He protests that his inclusion is “entirely undeserved” and clearly shows that some professors were added on a “very flimsy basis.” When he does state his opinion in lectures, he says, he asks students with opposing opinions to give the final word. He also offers extra credit for students who catch his mistakes.

Like Hampikian, Zillah Eisenstein, an emerita professor of politics at Ithaca College, holds political opinions, but says she does not let them affect the way she teaches. She told HNN that “As a teacher all I ask from my students is that they be self-conscious about what they believe, that they need to know what they believe. I never tell them or assume I know what they should believe.”

As the Professor Watchlist gains traction, professors in the database are increasingly complaining about being labeled as a “liberal” professor. George Yancy, a professor of philosophy at Emory University, wrote in an opinion piece in the New York Times that he does not believe that his teachings are un-American and refuses to “remain silent” while living in a society that promotes racism, a patriarchal structure, and denies the earth’s suffering.

Heather Cox Richardson, a history professor at Boston College, has also found herself in the database. In an article on Bill Moyers’s website she objected to the crudeness of the Professor Watchlist project. She said she does not publicly identify with any political party and believes “American democracy is the form of government that comes closest to bringing that principle to reality.”

Some professors find their presence in the database a potential threat to their well-being. In an article published by Time, Enrique Neblett Jr., a professor of psychology and neuroscience associate at the University of North Carolina at Chapel Hill, says that his “biggest fear is that people will see my name on this list and target me or my family as a result.” The Professor Watchlist founders insist that they do not believe that an “easy to search database” would “endanger the safety of anyone.” They equate their database with websites like Campus Pride Index that help gay students understand the climate that exists on various campuses.

Professors, students, and numerous individuals disturbed by the Watchlist have given support to professors included on the list. In a letter published in the South Bend Tribune, over 100 faculty members at the University of Notre Dame (who are not included in the database) state that they “are coming forward to stand with the professors you [the Professor Watchlist] have called ‘dangerous,’ reaffirming our values and recommitting ourselves to the work of teaching students to think clearly, independently, and fearlessly” by asking to be added to the database. Twitter users started using the hashtag #TrollProfessorWatchlist to show their support for teachers who have been included on the list. Some have nominated a variety of fake professors for inclusion, including Professor Roy Hinkley from Gilligan’s Island and Ms. Frizzle from The Magic School Bus.

Even though the Professor Watchlist was released in November and is still in its initial phase, it’s already drawn the fire of satirists. See Professor Watchlist Redux, which has gained a following. Unlike the original Watchlist, this one is intended to be an “aggregated list of intellectuals throughout history from all political persuasions who are dedicated to open inquiry… [and] will fight for the values that help prevent tyranny and small mindedness.” It is unclear what the future holds for Turning Point USA and its Professor Watchlist, but it appears to be drawing more and more media attention (most of it critical).