Peter Cole is a historian of the twentieth-century United States, South Africa and comparative labor history. Dr. Cole is Professor of History at Western Illinois University. He is the author of Wobblies on the Waterfront: Interracial Unionism in Progressive Era Philadelphia (University of Illinois Press, 2013) and currently at work on a book entitled Dockworker Power: Race, Technology & Unions in Durban and the San Francisco Bay Area. Follow him on Twitter @ProfPeterCole.

Republicans love reminding liberals that the Republican Party "freed the slaves." Some know enough history to remind Democrats that their party, in fact, defended slavery. While true, they cherry pick their parts of US History—a 150-year old part, at that. 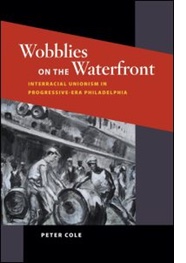 While watching cable “news,” during a Thanksgiving visit to my Mom, this tired argument again reared its head. In so doing, the selective nature of historical knowledge, regarding race and politics, smacked me in the face. One Republican politician (guess this person’s race and sex), lamented that blacks vote for the party of slaveholders rather than the party of Lincoln. Blacks, he implied, have forgotten history and only voted for Clinton because Democrats give black people “handouts.”

I flashed back to Donald Trump discussing “the Blacks” before all-white audiences in which he bashed the Democrats on race matters. Being a historian, I recalled a Baltimore Afro-American headline from the 1936 presidential election: “Abraham Lincoln Is Not A Candidate in the Present Campaign.”

There were logical reasons why 99% of African Americans voted the straight Republican ticket for three generations, roughly 1870 through the 1920s. Yet, it makes equal sense why they began voting heavily Democratic in 1936 and increasingly so in the 1960s.

Here’s the background. Slaveholders led the Democratic Party—the nation’s first—from its inception. Thomas Jefferson, James Monroe, James Madison, and many other “founding fathers,” who wrote so boldly about equality and natural rights, owned slaves. Andrew Jackson, the most important president during the Age of the Common (white) Man, in which property qualifications to vote (for white men) ceased, was also a slaveholder and Democrat. The ideological father of secession to protect white people’s “right” to own black slaves, John C. Calhoun, was a Democrat. Modern-day Republicans, like Dinesh D’Souza, take great joy in highlighting this portion of US history, now nearly two centuries old.

Similarly, contemporary Republicans love highlighting that their party was established by people who opposed slavery though—importantly—not because they all believed in black equality. Rather, many, arguably most, whites opposed slavery because the institution hurt white farmers and workers who could not compete with the low labor costs of Southern slaveholders.

In the 1860 election, Abraham Lincoln did not even appear on southern states’ ballots. Lincoln, of course, won and eleven slave states quickly seceded, seven before Lincoln even took office. South Carolina hastily issued a “Declaration of the Immediate Causes Which Induce and Justify the Secession of South Carolina from the Federal Union.” It noted, “an increasing hostility on the part of the non-slaveholding States to the institution of slavery” and complained that Northern states refused to “fulfill their constitutional obligations” by interfering with the return of fugitive slaves. White Democrats’ commitment to slavery—not states’ rights—provoked secession.

D’Souza and that Republican congressman who noted that slaveholders dominated the Democratic Party were spot on. Here is Confederate Vice-President Alexander Stephens delivering his legendary “Cornerstone” speech:

“The new [Confederate] constitution has put at rest, forever, all the agitating questions relating to our peculiar institution—African slavery as it exists amongst us—the proper status of the negro in our form of civilization. This was the immediate cause of the late rupture and present revolution...Our new government is founded upon exactly the opposite idea; its foundations are laid, its cornerstone rests upon the great truth, that the negro is not equal to the white man; that slavery—subordination to the superior race—is his natural and normal condition.”

We know what happens next: war, the bloodiest in US History. In 1863 Lincoln issued the Emancipation Proclamation (which did not free a single black person from slavery as it applied only to slaves under the control of the Confederacy). He also supported passing the Thirteenth Amendment, which actually abolished slavery, in 1865, albeit months after his tragic assassination.

To its credit, the Grand Old Party did not stop there. “Radical Republicans,” a term not intended as a compliment, kept promoting black equality after abolition. Pushed by and with mighty support from black people, congressional radicals successfully passed 2 key amendments: the Fourteenth, which ensured equal protection under the law for all citizens and empowered the federal government to ensure it, and the Fifteenth, which granted black men the right to vote.

This era immediately following the Civil War, Reconstruction, proved the high water mark of Republican efforts to ensure black equality. Black men when enfranchised, in turn, voted Republican with great passion. Not coincidentally, Reconstruction was despised by both racists (for granting African Americans their equal rights) and libertarians (for increasing the power of the federal government to do so).

Reconstruction’s collapse, alas, marked the end of the Republican Party’s commitment to black equality. Nevertheless, black men and, when they achieved the vote in 1920, black women, loyally voted GOP when they could. However, after Reconstruction, Southern whites—Democrats, mostly—systematically obliterated black political power through a combination of massive violence and legal maneuverings upheld by the Supreme Court, to its great shame, in Plessy v. Ferguson (1896) and Williams v. Mississippi (1898). The Republican Party, no longer led by lions like Lincoln or radicals like William Sumner or Thaddeus Stevens, assented to the systematic disenfrachisement of African Americans.

Subsequently, neither party considered black equality important, though some white Republicans joined blacks in condemning the ongoing horror of lynching and introduced congressional bills to empower the federal government to protect blacks from it. Democrats from Southern states, predictably, ensured such bills never became laws. The GOP remained “the party that freed the slaves” and, truthfully, voting for it made more sense than for the party of racism and Jim Crow. That started changing in the 1930s.

In 1932, about 70% of blacks voted for Republican Herbert Hoover but by 1936 a historic realignment began. Most Blacks were poor before the Great Depression and they continued suffering, even more than whites, during it; black poverty and unemployment rates were about twice as high than for whites. Though Democrat Franklin D. Roosevelt’s New Deal policies did not target black poverty—and Southern Democrats managed to carve out huge, racist exceptions that severely disadvantaged blacks—millions of blacks benefited. FDR’s wife, Eleanor Roosevelt, also pushed him toward black equality, earning her the enmity of sexists and racists alike.

As a result of tangible gains, African Americans started voting Democratic. In 1936 71% voted for FDR, perhaps the single most dramatic shift of any group of American voters in a four-year period.

Roosevelt’s successor, Harry S. Truman, followed up by ordering the integration of the armed forces in 1947, a major civil rights issue. He did not need congressional approval where Southern (read: white) opposition would have stopped it cold. Though huge majorities of blacks voted Democratic, 23-39% still voted Republican between 1936 and 1960.

The 1960s sealed black loyalty to the Democratic Party. Lyndon Baines Johnson (from Texas, never forget) successfully pushed Congress to pass the Civil Rights Act of 1964 (which, once and for all, ended legal segregation) and the Voting Rights Act of 1965 (which empowered the federal government to protect black voters from state efforts to disenfranchise them).

In 1964, the main parties made fateful choices on race politics that continue defining them to this day. The Republicans nominated Barry Goldwater, an archconservative who voted against the Civil Rights Act. He won his home state of Arizona and only five others—all former Confederate ones. Johnson won in a tremendous landslide, nowhere more so than among blacks, 94% of whom voted for the white Texan.

Subsequent presidential races, essentially, repeated 1964. In 1968 and 1972, Richard Nixon adopted a “Southern (white) strategy” that peeled away more such voters from the Democrats. In 1981 Republican strategist Lee Atwater explained how:

“You start out in 1954 by saying, ‘Nigger, nigger, nigger.’ By 1968 you can’t say ‘nigger’—that hurts you, backfires. So you say stuff like, uh, forced busing, states’ rights, and all that stuff, and you’re getting so abstract. Now, you’re talking about cutting taxes, and all these things you’re talking about are totally economic things and a byproduct of them is, blacks get hurt worse than whites.… ‘We want to cut this,’ is much more abstract than even the busing thing, uh, and a hell of a lot more abstract than ‘Nigger, nigger.’ ”

In 1980, Ronald Reagan built upon these racist codes. For instance, he campaigned near a small town in Mississippi where three civil rights activists had been murdered sixteen years prior and declared his support for “states rights.”

Meanwhile in the 1980s, North Carolina Senator Jesse Helms became the most outspoken Republican on Capitol Hill on race matters. In leading the opposition to the campaign to declare Dr. Martin Luther King, Jr.’s birthday a national holiday, Helms denigrated King and other civil rights activists’ “proven records of communism, socialism and sex perversion.” Similarly, Reagan and his party attacked affirmative action as a (modest) effort to address 350 years of slavery and segregation. In 1984 while whites overwhelmingly voted for Reagan’s re-election, just 9% of black voters did.

The saga continued into the 1990s and 2000s. Trent Lott, Republican Senate Majority Leader, lamented that racist and ardent segregationist Strom Thurmond had not won the presidency in 1948. Mississippi Governor and Republican leader Haley Barbour, when asked about racial segregation, insisted, “I just don’t remember it as being that bad.” Just 10% blacks voted for Republican presidential candidates.

In 2008, lest someone forgot, Democrats nominated Barack Obama, a black man. Many white Americans were apoplectic and went full racist, going so far as to assert that Obama was not even an American! 55% of whites voted for McCain in 2008 and 59% for Romney in 2012. In 2008 and 2012, about 95% of black voters chose Obama. We can guess that the other 5% think Clarence Thomas is a great Supreme Court justice.

And so we arrive in 2016. Donald Trump declared he would help “the blacks” before nearly all-white audiences and criticized black people for protesting racist police brutality like when a white police officer gunned down Walter Scott while running away.

Meanwhile, some white conservatives assert blacks only vote Democrat because of welfare checks, as one Fox News commentator described: “a client relationship between protected classes of voters and politicians who promise ever greater handouts and state-coerced preferential treatment, and a decadent cycle that keeps African-Americans pinned down in poverty.”

While Hillary Clinton’s policy legacy and statements reveal a complicated relationship with African Americans, at least she, occasionally, names institutional racism and has long demonstrated an interest in African American rights.

In short, for nearly 150 years black voters have demonstrated rational behavior as well as loyalty to the party that treats them even half-decently. So, while that Republican politician was quite right that the Democrats were the party of slavery (and Jim Crow), black people demonstrate they are far more likely to consider recent, not antebellum, history when voting. Abraham Lincoln remains dead as does, it seems, the commitment of contemporary Republicans to black equality.