Trump’s Gambit with Taiwan Is a Monumental Blunder

Andrew Meyer is a professor of history at Brooklyn College. He blogs at Madman of Chu. 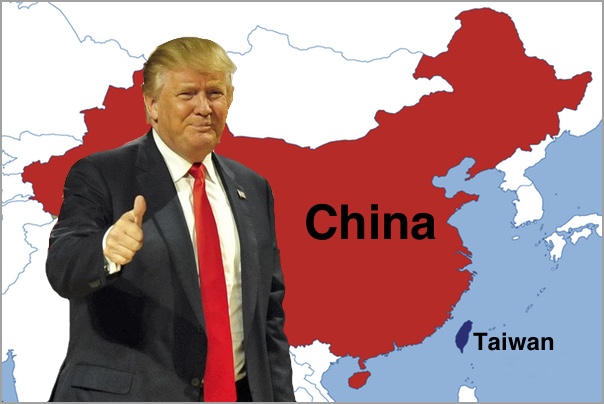 President-Elect Trump's declaration that the U.S. does not "have to be bound by a 'one China' policy” unless Beijing makes concessions regarding trade expresses a profound misunderstanding of conditions in the Taiwan Strait. For four decades the United States has cultivated a deliberate posture of "strategic ambiguity," striving to preserve the status quo by keeping both sides guessing as to how far the U.S. will go to defend Taiwan, and under what circumstances. Abandoning this fragile homeostasis in search of pecuniary advantage is like lighting your neighbor's house on fire to get a better price for her used car. Beijing will view any change to the “one China” policy as an equivalently existential threat to its own national security.

The reasons for this state of affairs are complex and rooted in the history of both mainland China and Taiwan. Americans often assume that the Taiwanese desire independence merely in recognition of the established fact of the island’s autonomy. But the move for formal secession is driven by passions much more visceral and aggrieved. When Chiang Kai-shek first became President on the mainland, Taiwan was a Japanese colony, repatriated to China only at the end of World War II. The military governor he dispatched to the island was so corrupt and oppressive that in 1947 the Taiwanese rose up in a rebellion that was put down with horrific brutality. Repression continued after the remnants of the Nationalist party and its military took refuge on Taiwan in 1949. Until 1987 the island was kept under martial law, in thrall to a system that concentrated economic and political power in the hands of mainland emigres and afforded native-born Taiwanese (the majority) only token participation in the management of their own affairs.

During the "Taiwan miracle" of the 1980's and 1990's, the Taiwanese economy prospered and the government gradually transitioned from a single-party autocracy into a vibrant multi-party democracy. But the resentments of past injustices linger. The current president of Taiwan, Tsai Ing-wen, is of the opposition Democratic Progressive Party (DPP). A large faction in the DPP feel strongly that Taiwan must be its own nation and that decades and centuries of mainland exploitation have nullified any bonds of kinship between Taiwan and China. These partisans are prepared to pursue the goal of Taiwanese nationhood at any cost, even war with mainland China.

Unfortunately, these feelings on Taiwan are countervailed by those of Chinese nationalism on the mainland. Nationalism is very new in Chinese cultural history. From 221 B.C.E. to 1911 the Chinese people lived under a succession of dynastic regimes that claimed unbounded and universal dominion. In practice and in theory this meant that all Chinese empires assumed gradations of allegiance among their subjects. When, for example, the Qianlong Emperor (r. 1735-1796) wrote an edict to King George III of England he commanded him to "tremblingly obey." Qianlong understood that the British monarch was his subject to a lesser degree than the King of Korea, who was in turn a Qing subject to a lesser degree than the people of Beijing.

This norm changed only gradually over the course of the late 19th century, as faith in imperial institutions was eroded by an escalating series of "national humiliations 国耻," of which the cession of Taiwan to Japan after defeat in 1895 was the most traumatic. To Qing rulers, Taiwan was not integrally enough tied into their empire to constitute a "core interest." For educated Chinese, the Qing willingness to surrender Taiwan was shocking.  This outrage is reflected in the most influential political text of that time, The Revolutionary Army, penned by an 18-year-old Zou Rong in 1903. In an attempt to goad and shame his readers into a new perspective, he wrote:

“[There] is a family, with father and son, husband and wife and brothers all living peacefully together. Suddenly ruffians descend on the house, property is seized, and the household enslaved. The whole family will fight to the death to get back their possessions before the incident is settled…. I am particularly amazed that my fellow countrymen will put up with things as a nation which they would not … as a family.”

Zou here presented his “400 million countrymen” with a radically new way of understanding political identity. If they were really "a nation," he implied, they would not stand for the cession of Hong Kong or Taiwan, but (like the family in his microcosmic example) "fight to the death" to retain their "property."

This nationalistic paradigm has had a tumultuous career over the last century in China, but through all the vagaries of Chinese politics it has remained a vital force The concept of "national humiliation" that Zou employed in such extravagantly polemical fashion has become an ordinary touchstone of identity among Chinese citizens today, as intuitively integral to their understanding of their own past as the enormity of "taxation without representation" is to Americans' understanding of theirs.

The status of Taiwan is thus an exquisitely sensitive flashpoint in the collective consciousness of the people of mainland China. In a web survey of Chinese public opinion conducted by theGlobal Times this past April, 97% of respondents considered Taiwan "an inseparable part of China" and 85% favored military action to achieve "reunification." A survey of the general public and "policy elites" done by the Carnegie Endowment for International Peace in 2013 showed similar patterns.

Should Taiwan secede, Beijing would have to choose between war and domestic unrest on a scale exceeding the Tiananmen Square movement. Even discounting the threat of secession, Taiwan’s example of regional autonomy and functional democracy present dangerous temptations to interest groups inside the People’s Republic. Taiwan is like a cobra with which the Chinese Communist Party is forced to share its bed, much energy must constantly be expended by China’s leaders to prevent that proximity from becoming fatal.

Beijing has little room to maneuver on this issue and even less desire to be forced to do so. If Mr. Trump insists on calling Beijing's bluff he will quickly find that they are not bluffing. Enough irresponsible rhetoric from Washington could easily lead to a conflict with the potential to spiral out of control. For the sake of world peace we must all hope that Mr. Trump gains wisdom quickly or, failing that, wiser heads than his prevail in crafting American policy in the Taiwan Strait.