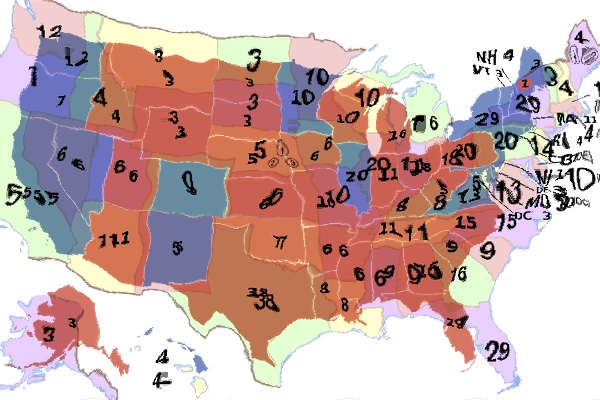 Students used to ask me if this scenario was likely to happen again, and I would answer, since it had been a century or more, highly unlikely to occur again. And then, lo and behold, it has now happened twice in a generation, 16 years apart, and by much greater margin, with Al Gore having a margin of more than 553,000 popular votes over George W. Bush in 2000, and now Hillary Clinton, with a margin of more than 2.84 million popular votes over Donald Trump in 2016, five and a half times Gore’s lead sixteen years ago.

The craziness of the Electoral College is therefore there for all to see, and yet the odds of changing this system, and utilizing popular votes alone, as happens with every other election in America at every level of government, is just about zero, as only a constitutional amendment, which requires a two-thirds vote of both houses of Congress, and three-fourths of the state legislatures (38 out of 50), could end this anachronistic system. We are permanently stuck with an undemocratic system of electing our President, and it is likely that this could happen on a more regular basis in the future.

The only way out of it, it would seem, would be reforms that would require electors to support the candidate who won the majority of the popular vote nationally, a proposal of the group known as the National Popular Vote Interstate Compact, which so far has 10 states and the District of Columbia, all Democratic, with 165 electoral votes of the 270 required to win the election, committed to following and honoring the national popular vote. The odds of Republican states or swing states joining this compact seem very low, particularly considering that Republicans benefit from the present system.

It turns out that Hillary Clinton had a wider lead in popular vote margin than James Garfield in 1880; John F. Kennedy in 1960; Grover Cleveland in 1884; Richard Nixon in 1968; James K. Polk in 1844; and Jimmy Carter in 1976. And of course, the Presidents who lost the popular vote—J.Q. Adams in 1824, Hayes in 1876, B. Harrison in 1888, and George W. Bush in 2000—and now Donald Trump in 2016, also must be added to the list, so a total of 11 Presidents had a worse situation in their elections than Hillary Clinton. Additionally, Trump's "landslide" Electoral College margin of 306, is actually 46th of 58 elections in percentage of electoral votes won, meaning Trump is in the bottom 20 percent of all Electoral College winners.

It seems that the best hope for the Democratic Party to overcome their disadvantage in the Electoral College would be to work at turning the solidly “Red” states of North Carolina, Georgia, Texas, and Arizona to “Blue” which seems highly likely over time with the rapidly growing Hispanic and Asian American population in these four states, which are certain to gain ever more electoral votes after the 2020 US Census, and the reapportionment of seats in the House of Representatives, and likely undermining the “Rust Belt” states of Pennsylvania, Michigan and Wisconsin, which went by small margins to Donald Trump in 2016, after having been “Blue” for six straight Presidential elections since 1992, along with “swing” state Ohio. The 64 electoral votes lost from those four states for the Democrats, could be replaced by the 80 plus electoral votes of the Sun Belt states by 2024 or 2028, if voting population participation continues, and with more of the Millennial generation being part of the political equation in the next decade. And of course, the ultimate “swing” state of Florida, with 29 electoral votes now, and more after reapportionment, due to its rapidly growing population, including Hispanic and Asian American, would also be in play in the near future.

So ironically, it could be the Sun Belt States—North Carolina, Georgia, Florida, Texas, and Arizona—with 109 electoral votes now, but more in the future, which could easily overwhelm the 64 electoral votes (as of now) of Pennsylvania, Michigan, Wisconsin, and Ohio—and insure the Democratic Party being able to overcome the problem they have now faced twice in a generation in 2000 and 2016, resolving the Electoral College crisis in the future. There are already signs that this is happening, as Trump’s percentage of popular vote victory in the Sun Belt is less than Mitt Romney earned in 2012. Once again, the political map, which favored the Republicans since 1968 and allowed them to win 8 of 13 national elections from 1968 to 2016, is very likely to change soon.

The result would be the Democrats highly likely to keep five New England states (all but New Hampshire) safely in their camp in Presidential elections; five Middle Atlantic states (including Virginia) and the District of Columbia remaining loyal; two Midwestern States (Illinois and Minnesota) still supportive; the three Mountain States (Colorado, New Mexico, Nevada) and four Pacific Coast states (California, Oregon, Washington, Hawaii) still also with them; and then the five Sun Belt states transformed by immigration added to their total. Instead of 232 electoral votes in 2016 for the Democrats, even with maybe New Hampshire diverting (with its four electoral votes), we could see 228 certain electoral votes, plus the potential of 109 from the five Sun Belt states shifting to the Democratic Party in the 2020s. Of course, the exact numbers will change from 337, with some of the states in this coalition losing some electoral votes, but the Sun Belt states likely to gain more than are lost from the loyal, traditional Democratic states in recent elections. And even if one or two of these Sun Belt States were to remain Republican, there would still be enough electoral votes for the Democrats to win the Presidency, with particular emphasis needed to turn the larger electoral vote states of Texas and Florida.

Therefore, the Electoral College crisis could resolve itself in the next decade, and lead to popular and electoral vote synchronizing for the long term future of Presidential elections, and in favor of the Democratic Party, due to the issue that Republicans have been refusing to work on, the growing influence of Hispanic and Asian immigration. Their nativist stand could easily backfire on them and become a major advantage for the Democratic Party.