What Were the Founders Thinking When They Created the Electoral College?

Andrew Shankman (shankman@rutgers.edu) is Associate Professor of History at Rutgers University-Camden. His book "Original Intents: Hamilton, Jefferson, Madison and the American Founding" will be published by Oxford University Press in March 2017. 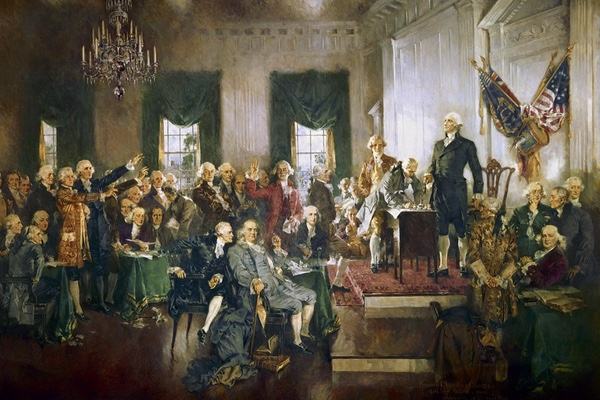 Created by the Constitution, the original Electoral College worked like this: each state appointed electors equal to its number of senators (2) plus representatives, apportioned at a ratio of 1 for every 30,000 residents. Each elector cast two votes for president and at least one of those votes had to be for someone outside the elector’s state. If someone received the most votes and a majority, he became president. The second highest vote-getter became vice president. If no one received a majority, the decision went to the House of Representatives, which could choose the president from among the top five vote-getters, and had to make the highest vote-getter vice president if they chose not to make him president. To us these original procedures may sound insane, this year they would make majority vote-getter Donald Trump president and Hillary Clinton vice president.

So, what were the Founders thinking? The Founders were inspired by the classical republics of Greece and Rome and believed they had collapsed when they stopped seeking the public good as their citizens divided into parties to pursue their own interests. For the Founders the public good emerged from a coherent set of values, and understanding how to achieve it required a deep knowledge of the classics, of natural law, common law, and the law of nations, and of the new science of political economy that arose during the Enlightenment. Above all, one had to possess disinterested virtue--putting aside personal interests for the sake of the public good. The Founders thought that most citizens were not capable of fully comprehending the public good. For the United States to succeed, the small group of great and talented men who could would have to guide them. Believing in a unifying singular public good, the Founders saw no value in political parties. Parties existed to promote competing interests, which was contrary to the public good. Citizens either embraced the public good or they behaved selfishly and badly.

Only by starting with these assumptions did the Electoral College make sense. After George Washington’s presidency, the Founders assumed their Electoral College would routinely place the decision of who would be president with the House of Representatives. They reasoned that the small group capable of comprehending the public good was evenly distributed geographically. A reasonable number of them would stand for election. Each would be equally qualified virtuous gentlemen. Without political parties to inflame passions and mobilize voters into a few large groups, only rarely would a candidate gain majority support in the Electoral College. The Electoral College would helpfully sort out five from the larger group of the equally qualified, but usually would do little more than that.

Yet almost immediately after ratification of the Constitution, reality obliterated the Founders’ plan. Bitter divisions over Hamilton’s financial system and the French Revolution showed that Americans violently disagreed with each other. By 1796 two political parties had formed to support or oppose the current course of the nation’s domestic and foreign policies and to compete for the presidency. Divided Founders became adversarial party leaders. With large regional, even national, voting blocks, it was suddenly highly likely that the leader of one of the two parties would gain a majority in the Electoral College. The Electoral College would now do what the Founders never imagined it should routinely do—determine the presidency. And the new president’s most powerful critic, the leader of the opposition party, would likely get the second most electoral votes, become the vice president, and bring bitter partisan rancor into the heart of the executive branch. This bizarre outcome happened in 1796 when Federalist John Adams was elected president due to receiving the majority of electoral votes, and his opponent, Democratic-Republican Thomas Jefferson, became vice president. In 1800 Jefferson’s electors were so disciplined that they cast each of their two votes for him and for Aaron Burr, who they planned to make vice president. The result was that both received the same number of votes while finishing ahead of their Federalist opponents, leading to a prolonged constitutional crisis during which Pennsylvania’s Governor contemplated marching his state militia to Washington D.C. to prevent anyone other than Jefferson from being inaugurated.

By 1800 democracy and political parties had made the Electoral College an instrument of chaos. It led in 1803 to passage of the Twelfth Amendment, which required that electors stipulate a vote for president and for vice president. In abandoning the Founders’ vision for the Electoral College, Americans were admitting that they did not live in the sort of republic where the Founders’ Electoral College made sense: one where virtuous gentlemen pursued the singular unifying public good about which they all agreed. In altering the Electoral College as they did, Americans of the early nineteenth century left us a hybrid and confused version of the original. Requiring electors to vote for a president and a vice president on a single ticket was a concession that party political conflict was never going away. Yet though political parties and democratic conflict were now acknowledged to be the driving force in American politics—that getting the most votes was what mattered—those parties would simply have to trust to luck that their votes were distributed in just the right way to gain an electoral majority.

Over time the Electoral College has become increasingly dysfunctional. As the nation’s population grew, in the twentieth century we limited the number of representatives to 435 to prevent the House of Representatives from becoming absurdly large. The total number of electoral votes is capped at 538 (senators plus representatives plus three votes for the District of Columbia) and 153 are distributed away immediately since all states must have a minimum of three. The remaining 385 are distributed by population, which grows ever more distorting as the 385 total remains constant while the population grows. In 2014 California’s population amounted to 66 Wyomings. Wyoming has three electors and California 55. But to ensure that a vote from California counted as much as one from Wyoming, California would need 199.

The hybridized confusion has led to our current schizophrenia. Trump supporters are demanding that electors obey the popular vote within their states. At the state level the popular vote must be respected so that at the national level the popular vote can be ignored. This selective devotion to the popular vote is a legacy of the confusion that resulted when the Founders created an institution that made sense only for conditions that it quickly turned out did not exist. In 1803 Americans merged the Electoral College, an institution that only made sense in a world without partisanship and organized political parties, with a political process and a political culture based on partisan conflict organized by political parties. Rather than allow chronic chaos in their Republic, the Americans of 1803 abandoned the Founders’ Electoral College. To avoid chronic chaos in our Republic, we must abandon the Electoral College entirely.