Matthew Dennis is Professor of History and Environmental Studies at the University of Oregon. His most recent book, Seneca Possessed: Indians, Witchcraft, and Power in the Early American Republic, was published by the University of Pennsylvania Press in 2010. He is currently at work on American Relics and the Politics of Public Memory, a cultural and political history of death, mortal remains, and public memory in colonial America and the United States. 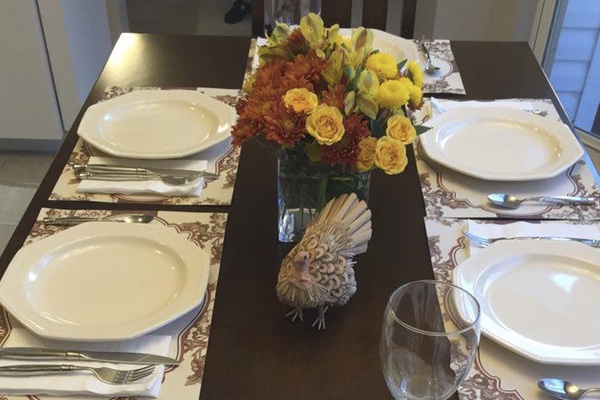 Thanksgiving 2016 would seem to pose a major challenge for Americans. If the substantial minority that just elected Donald J. Trump to be the forty-fifth president of the United States is elated, at least half the American electorate is in no mood to celebrate.

Americans have traditionally given thanks on Thanksgiving in bad times as well as good, in moments of crisis as well as times of prosperity and calm. And they held Thanksgivings and found reasons to give thanks even when national events seemed not to merit it—as on the occasion of the first national Thanksgiving, proclaimed by Abraham Lincoln in 1863 during the Civil War.

Thanksgiving’s unique elasticity has rendered it largely immune to disruption by troubled and troubling times, allowing it to endure as America’s most cherished holiday. For a public holiday, it is peculiarly private; for a national holiday, it is distinctively localized and variable and nonpartisan. Though domestic and inwardly focused, Thanksgiving is also the time when Americans in the largest numbers reach out to the least fortunate in their communities. Americans knit themselves into the national fabric and shape the meaning of the occasion—and define America itself as a plural nation—simply by gathering privately and eating turkey.

If its icons are often Pilgrim Patriarchs, the domestic feast is gendered female. Often religious but not particularly sectarian, Thanksgiving does not exclude non-Christians. Indeed Jews, Muslims, Hindus, and others, including nonbelievers, embrace it, as do a diverse range of hyphenated-Americans and even Native Americans, empowered to observe the day and accessorize their festive meals in their own particular fashion. American Thanksgiving cultivates the universalism of thanksgiving rituals that cross boundaries of culture, religion, race, and ethnicity. Historically, it has provided a pluralistic inoculation and an antidote to American ethnocentrism and exclusion.

Mostly, at Thanksgiving Americans offer thanks for home and family. And, at least for a day, they actively avoid confronting the complicated and often disquieting world beyond their thresholds. The point of Thanksgiving has generally not been to take stock of that real, sometimes harsh world. Americans commonly de-politicize the day, stopping the clock, putting aside business as usual. They favor the gridiron over political footballs. They push Election Day out of their minds, and they pause in their one-day holiday haven to catch their collective breath before the frenzy of the Christmas shopping blitz.

But 2016 seems different. Given the spatial dimensions of our deep political divide in the U.S., it’s likely that many families, like many states, are clearly red or blue, and they will color their conventional feasts accordingly. But what sort of appetite will purple families have for Thanksgiving after this raw and bruising electoral campaign that’s scarred the United States? Since the nineteenth century, the November “Harvest Home” festival has encouraged travel to recompose families spread geographically across an expanding nation. Thanksgiving eve is today America’s most heavily travelled day, with airports and highways jammed with those hoping to reconnect with family. How will urban and rural, red and blue kin, reconnect this year?

Is Thanksgiving equal to the challenge this November 24? Some have simply called the whole thing off, staying put or reconstituting their guest lists.

Has Thanksgiving’s strength become a weakness? As a family holiday and an engine of American identity—an identity emphasizing diversity, inclusion, generosity—Thanksgiving 2016 is confronted by an election season that exposed an American identity crisis. The recent presidential race contested American identity itself, in the rawest fashion. Candidate Trump’s often misogynist, ethnocentric, and racist rhetoric questioned the very legitimacy of diverse Americans and the families they’ve created—seemingly rejecting American pluralism itself. On the other hand, Trump’s victory represented for some a restoration of an idealized conservative America—a nationalist “heritage,” uncomplicated by (or rejecting) the economic, social, sexual, and demographic changes of the twenty-first century.

Although Thanksgiving is a historical holiday, the fete is about the future. Giving thanks would seem to imply a backward look, acknowledging past benefices for which we give thanks in the present. But most Americans are not particularly historically minded; immersed in their complicated world, they orient themselves toward the future—a prospect that from the perspective of November 2016 is stunningly uncertain, for some hopeful, but for many perilous and frightening.

Since the mid-nineteenth century, Thanksgiving has been designed to cultivate national unity and reconciliation. On Thanksgiving 2016 we might express hope through an updated version of Lincoln’s Second Inaugural Address: With malice toward none, with charity for all, but with firmness in our ongoing commitment to justice, equality, and the health and safety of all people and our imperiled planet, let us bind up the nation’s wounds and do all that which may achieve and cherish a just and lasting peace among ourselves and with all nations.