Vaughn Davis Bornet is emeritus professor of history and social science at Southern Oregon State College. Among his many books is The Presidency of Lyndon B. Johnson (University Press of Kansas). 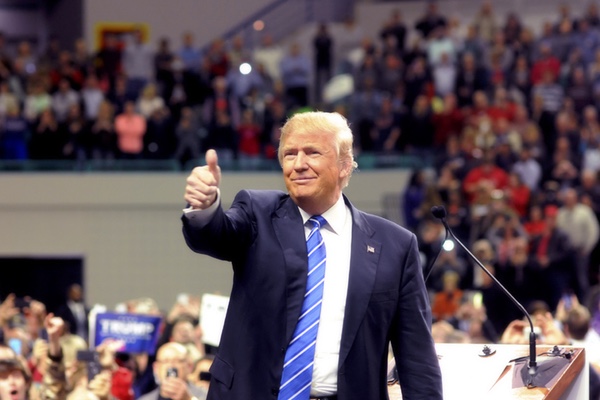 Frequently read by HNN followers, our aged author has ventured to offer some of his opinions on where we are now, as Inauguration Day, 2017, approaches. Like other serious students of the Presidency, he arose in the middle of the Election night to discover that we are facing something dramatic. A very serious student of political parties and America’s history at Emory, Georgia, and Stanford, starting in 1935, he thinks it’s time for citizens to confront our future.

Like you, I have access to a local newspaper and I also subscribe to an immense urban one. I have been forcing myself to watch CNN, MSNBC, and FOX; the pace of events has also indicated a diet of CSPAN. (Election night I arose at three and learned from TV of the shocking result of the national election. For an hour or two, several major network programs offered fare that was dramatic viewing. Live speeches accepted victory and conceded defeat. There was the new First Lady and her loved ones.)

Several times, courtesy of TV, our President still in office has delivered from far overseas a long speech in which he seemed to be talking as much to his imminent successor as he was to the likes of me. Yes, this has been a television election, centered at the very same time in states and counties and involving the future of the nation’s Capitol. Both aspects have involved dependence by people like me on that TV set.

Seeking intelligent replies to those curious ones seeking inside information, I gravitated to my years of “political” education and those long stretches when I studied up to four presidents intensively in years of concentrated effort that included more than a few of our stirring elections.

One election that forced remembering was the contest of 1964. As the weeks of that year passed, the innocent little girl picked daisy petals, and the Country grew apprehensive over its military reservist Barry Goldwater. That man from afar helped critics with remarks unacceptable at the time. Reacting, I abandoned my moderate Republican allegiance and without hesitation voted for L.B.J. The majority of Americans voted the same. That the electorate was shocked was evident as the balance between the parties of 1960 was replaced by the nation being taken over by the Democratic Party.

Back then, there was another case of a single-minded candidate being offered but not well coached. His party split. Many there were who thought him incompetent, but it was in the early sixties that one who briefed men of power on nuclear matters and interacted with them told me, “Barry Goldwater was the smartest man in my audiences.” It certainly did him no good with the electorate at the time that he was alert behind the scenes.

Hillary’s career seemed ideally pre-Presidential. It included visits to most countries; fights for noble causes; power in an office analogous to the Presidency; a personal aspect not at all unpresidential; ability to speak intelligently; and vast support from leaders. It was not enough, for we were astounded when some public figures we didn’t know all that well endorsed her strange and peculiar opponent—one identified with something called Twitter that was miles from an early radio “Fireside Chat” of FDR.

Many times, I relied on my expertise to repeat, in effect, “Trump can’t possibly be elected.” Brilliant commentators from the Washington Post and the Wall Street Journal made it clear they thought absolutely the same. They relied on it! “Such a man can’t possibly win the Presidency of the United States,” sums up what we in the public were told by “the experts.” We will be more cautious next time about unanimity so positively and divisively expressed.

It is still November as I write, and the scholar in me is trying to make something out of the winning candidate’s first appointments and various rumors that just can’t be true. Again, I wonder how one who lives in Manhattan can arrive at such decisions. Mentioning no names, it is evident that several individuals who were offered real power so far just shouldn’t be trusted with it.

Yet there is another side to the passing scene. The winner’s face looks less flamboyant than when he was on the way up. He is saying things now and then that are appropriate! I keep looking admiringly at those family members and wonder if I should think maybe they chose (or grew up with) a brilliant businessman, not a buffoon with funny hair. How will he look in four years?

To several friends in deep despair I have said repeatedly in one way or another, essentially: “Those days and weeks immediately ahead (to January 20) will be, for him, twelve hour periods of listening to advice from learned ones—to people who held offices with power; who have had chances to solve or face major national and world problems; and briefed others with techniques honed to persuade.” He’ll learn! He’ll emulate! He’ll grow. Won’t he?

What I am encouraged to believe is that by the time the White House embraces him this Triumphant Winner will have been burnished and educated in some vital matters to a higher level. If his goal in life has been to make money—achieving power over people enroute—he will realize by January 20 that things have changed. As he sits upright in that White House bed, anticipating an 8:00 AM briefing by the C.I.A., he’ll know a President is in a far different ballgame—one that is his to lose.

Back when I bought the White House Diary of appointments as part of preparing my book The Presidency of Lyndon B. Johnson, and read those intimate memoirs by staff members of that day, I realized a basic truth: it is that the aides inundate the incumbent President during his waking hours. He is interrupted, guided, counseled, informed, corrected, scorned (behind his back), and praised repeatedly whether he deserves it or not.

Writing with my colleague the book Herbert Hoover: President of the United States, it became evident, as 1930 became ‘31 and then ‘32 and the President’s photographs showed him virtually exhausted, that the buck does indeed stop in the Oval Office, as is correctly repeated.

The Presidency has been hard on many an occupant, but personal growth, I feel very strongly, is absolutely inevitable in any incumbent—not excluding Donald Trump. He must learn, get others to advise him truthfully, weigh alternatives, and pick the time to act. He is the only one who can. I spent a year studying only F.D.R., during which it was evident that early on he had profited from several professors (Rex Tugwell, Raymond Moley) and go getters (Frances Perkins) in a way new to him.

Think of Harry Truman as he entered the White House, learned an atomic bomb decision would one day be his, suddenly was conferring overseas with heads of state, and thought back to the simple life he had lived in tiny Independence, Missouri. That high school graduate rose to the occasion, and concurred with the rebuilding of Europe with a Marshall Plan. Can’t our strange man, so long obsessed with personal wealth and high living, now learn to make Presidential decisions and grow in office?

Learning, and changing so as to be able to modify at least some events is mandatory for those in the Oval Office who are served an evening cocktail—accompanied by cleverly contrived advice. (FDR happily did his own serving of martinis.) Stupidity turns out to be heavily penalized! It can’t be laughed off. Being or appearing to be a fool under campaigning conditions is one thing. But if a President is not fully in command of ominous situations, he must at least appear to be, well, quasi-wise.

A handful of those I listen to, who at this moment work at “hating Trump”—his image, mostly—want to take out their misery on “The System.” Recently, others have taken to The Streets. That man with his many office and apartment towers couldn’t have pulled it off, they think, if the American way of choosing the top leader was any good (or was working properly). “Replace that Electoral System!” Cut back on election finance. Shorten the campaign. Go back to smoke filled rooms where hard drinking insiders chose only the Best—maybe! Try anything.

Maybe we do need major changes. Goodness knows, our disillusioned media (except for TV cable partisans) is in a mood to tear up “old ways” and try something new…. Let’s rethink everything for a while—and stop moping—it’s said. Meantime, everybody: watch every appointee of Mr. Trump that will have real power. Make sure the Trump family life and the Trump business activities are separated from the world of the United States Government.

The citizen’s first concern is war and peace. Critical to our families is health care legislation; survival of education and the environment; and our jobs. Students of the passing scene can read and comment on our relations with other governments. Such things are by no means exempt from intimate scrutiny if a people gets stuck with inept leadership.

I have been shocked at some persons who have shown indifference at what is going on. (I can hardly tolerate being around a few of them.) The need for American citizens to study and second guess what the “Washington bureaucracy” and its leader, Donald J. Trump, are doing is great indeed. Read up, You! Keep informed! Second guess. Write Letters to the Editor.

I hate to make this suggestion, but I will. Friends and neighbors try to keep on good terms, partly by avoiding verbal disputes. But now we find ourselves in a “situation.” When outrageous and clearly false remarks are made about politics and the leaders who won and lost, do consider making an effort to spread accurate and truthful information around. Don’t be quietly polite and let falsehoods have their day. One thing we all can do is get our news from dependable sources and correct the facts in our conversations so that we “have it right.”

I really believe that it is widespread ignorance of our history and politics in the public that has gotten us into this unprecedented situation. (I honestly think that the astounded winner of all the marbles didn’t for a minute think one who portrayed a mean TV executive could emerge The Victor over all he surveyed. He bet our public was uninformed—and he was right.

The election is over. Now that winner must forget hotels, resorts, and balance sheets and do what he can to preserve and improve the America we love. Good luck, people of our 50 states. The electoral deed of which we were a central part is all over. We the People have spoken—for now. (The time may well come when we’ll have to read up on that impeachment process, who knows? What we have done can be undone, after all. But for now, let’s not borrow trouble.)

The election of 2016 is past history, but its outcome is going to be with us for a long time. Live with it. Help make our land an improving place to live. Try to do your tiny part to make and then keep this democratic republic the world’s outstanding guardian of peace and justice.