by William A. Gordon

William A. Gordon is a journalist, Kent State graduate (class of 1973), and author of five books, including Four Dead in Ohio: Was There a Conspiracy at Kent State? 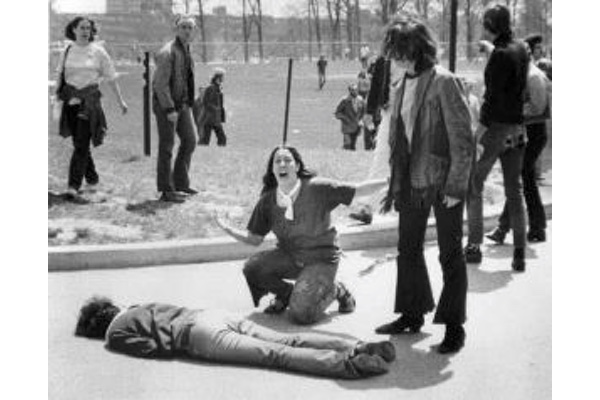 Mary Ann Vecchio kneels by the body of a student, Jeffrey Miller - By John Paul Filo

C. D. "Gus" Lambros was the staunchest defender of the Ohio National Guard during the first few years after the killings at Kent State University. He successfully defended three of the shooters during the 1974 criminal trial, as well as Sergeant Myron Pryor. Pryor was not indicted after a book by Peter Davies accused him of launching a murderous conspiracy at Kent State. 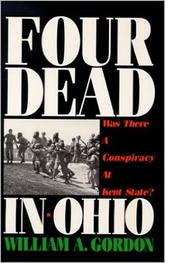 Now, Lambros's granddaughter's husband, John Fitzgerald O'Hara, an associate professor with the American Studies and Writing Program at Stockton University in Galloway, New Jersey, has written the first thoughtful, independent analysis of the evidence since my own book was published in 1990.

O'Hara believes the Guardsmen were not innocent, but also says that Davies and Pryor's other accusers are overlooking exculpatory evidence. O'Hara particularly takes to task Davies and wounded survivor Alan Canfora, who once described Pryor as a beady-eyed, bald barbarian who now resides in Hell. As O'Hara points out, the evidence against Pryor "was never airtight or beyond a reasonable doubt."

O'Hara argues: “First, neither [Pryor] nor anyone else should be solely blamed for such a terrible event without a sober consideration of evidence. Second, pinning the shootings exclusively on Pryor may oversimplify the historical event.”

O'Hara feels that an assumption that Pryor was guilty “occludes other important lines of analysis which might point to other nefarious individuals and forces at work. This may lessen our ability to find a different culprit, or to recognize degrees and responsibilities spread among many individuals and groups, guardsmen and protestors, military and political leaders . . . Truth and justice with respect to Kent State remain important; however, neither is served by passing judgments unqualified by contradictory accounts and evidence.”

In making his case, O'Hara concedes that a famous photograph depicting Pryor standing several feet in front of the firing squad, intently pointing his pistol, may implicate Pryor as a shooter "despite his own assertion that the weapon was neither loaded or fired." Then, contradicting this conclusion, O'Hara cites a controversial 1974 conclusion by Electromagnetic Systems Laboratory (ESL), a forensics photographic lab commissioned by the Justice Department to analyze the evidence. ESL concluded Pryor's weapon was not fired and "that the slide was in fact in the locked position."

Moreover, O'Hara cites the claim by Pryor's superior, Captain Raymond Srp, that he inspected and sniffed Pryor's gun and determined it had not been fired. Pryor also passed three lie detector tests arranged by Lambros. (These tests were never introduced into evidence at the subsequent wrongful death and injury trial which named Pryor as a defendant. Polygraphs are inadmissible in federal courts.)

Without delving into all the nitty gritty details of O'Hara's first two arguments (including the question of whether Srp was friends with Pryor), O'Hara seems to be on much sounder ground when he points out that Pryor "had no official authority to issue an order to fire." The key word here, of course, is "official." As Davies pointed out, the soldiers seemed to have lost faith in their commanders, who marched them onto a practice football field, where they found themselves surrounded on three sides. After the trials, one soldier, Sgt. Lawrence Shafer, bitterly complained the shootings would have never happened if the general did not have "his head up his ass."

The commanding officers seemed to have lost control of the troops, who then started improvising by throwing rocks and gas canisters back at the students. The fact that Pryor was a noncommissioned officer does not negate the possibility that there was an unauthorized order to open fire, whether given by Pryor or someone else. Indeed, a recent study by forensics audio expert Stuart Allen, using the most sophisticated technology available today, noted that he enhanced the tape recording of the shooting, a voice could be heard giving such an order.

O'Hara doubts that Pryor gave this alleged order, writing that Pryor "was wearing a gas mask that would arguably muffle any verbal commands that he gave." The main point of his article was that an over-investment in "Myron Pryor as the centerpiece of a murderous conspiracy," makes us forget that there were multiple contributing causes of May 4, 1970, and leads us to overlook other scenarios explaining what actually precipitated the Guardsmen to open fire.

That may be, but it is also true that the other theories of what precipitated the shootings are fraught with far greater weaknesses than the theory that Pryor or another Guardsman issued an order to fire on Blanket Hill.

The possibility that there was a sniper was ruled out early in the investigation, although an undercover FBI photographer and part-time Kent State student was involved in a curious incident before the shooting broke out. As suspicious as his actions were (e.g., placing himself between the Guardsmen and the students and throwing rocks at the students), it is highly improbable that Terry Norman could have instigated the tragedy. Even if Norman fired four shots, as forensic expert Stuart Allen also concluded, it is illogical to believe that the Guardsmen, upon hearing these shots, waited a full 70 seconds before firing into the crowd. Even senior citizens do not have that slow a reaction time, and the Guardsmen, of course, were mostly in their twenties.

Moreover, the other much discussed scenario: that the Nixon White House orchestrated the shootings, requires manipulating so many people and so many events that it seems beyond the scope of human capacity. Certainly, suspicions swirled around the not-so-veiled threats to shoot protestors the day before it actually happened, at a press conference led by Ohio Governor James Rhodes.(At the time of the shootings, the governor was trying to get the Republican nomination for the U.S. Senate seat in Ohio. Rhodes was behind in the polls, and preaching "law and order" to the masses.) However, after four and a half decades, no one has been able to produce one iota of evidence that the shootings were pre-planned. Indeed, it is one thing to say that Rhodes, as the Ohio National Guard commander-in-chief, set the tone that made the shootings possible, but quite another to say Rhodes or Nixon (or Nixon and Rhodes) gave any specific orders to kill students.

The spur-of-the-moment order to fire theory at least explains why an estimated half a dozen to ten Guardsmen simultaneously stopped, about-faced approximately 135 degrees, and fired a 13-second barrage at students who, according to a Justice Department report, were too far away to pose even a remote danger to the soldiers. When the shootings broke out, the Guardsmen were also just ten feet away from passing around the corner of Taylor Hall, where they would be beyond the protestor's field of vision. Any rocks would have just bounced off the corner of the building.

The much sought after "smoking gun" may still elude us, but the spur-of-the-moment order-to-fire theory still seems to be the least problematic, and the one most consistent with the eyewitness accounts.

O'Hara's article appears in the August issue of an online scholarly journal, The Sixties. It costs $43 to order it on the Internet, but I saved that by finding a friendly librarian who inter-library loaned the article to me.