It’s Time for Trump to Go. Party Leaders Need to Give Him a Push.

James Robenalt is the author of January 1973, Watergate, Roe v Wade, Vietnam, and the Month That Changed America Forever (Chicago Review Press, 2015); and a contributor to "The Presidents and the Constitution, A Living History" (Gormley ed., New York University Press, 2016). He lectures nationally with John Dean on legal ethics. 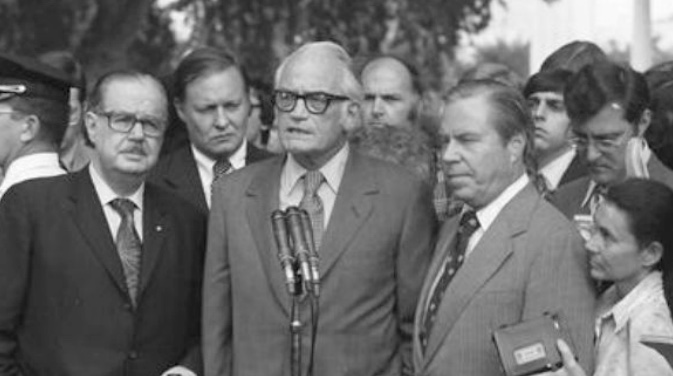 The GOP party leaders who told Nixon in 1974 it was time to go.

What a mess the Republican Party faces. Donald Trump’s indefensible conduct caught on a videotape with a hot mike should finally mark the end of his tortured and twisted run for the presidency. That is, it should if the leadership of the Republican Party at long last does the right thing and removes all support, hopefully forcing him to agree to leave the ticket. With his debate performance, however, it now seems like Trump will stay to the bitter end—but at what cost to the party? 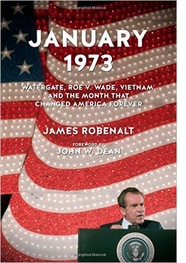 The Republican Party has been at this crossroads in the past. In 1974, Republican leaders abandoned their president, Richard Nixon, after a tape recording showed that Nixon had participated in the cover-up of the Watergate burglary crimes, something Nixon had vehemently denied. Those leaders included Senator Barry Goldwater of Arizona, who like his successor John McCain, had been the standard bearer of the Republican Party as candidate for president (in Goldwater’s case in 1964). Goldwater and other Republicans met with Nixon after the Supreme Court ordered the White House tapes to be turned over to the grand jury investigating Watergate (through a special prosecutor named Leon Jaworski). When Goldwater and others sat down with Nixon, they confirmed what Nixon knew: the gig was up, his support in Congress had vanished, and he had to resign. He did so on August 9, 1974, the first and only president to resign the office.

It was all unprecedented, and all so necessary. There was a cancer growing on the presidency, as White House counsel John Dean had told Nixon a year earlier. A criminal conspiracy to hide the facts about the Watergate had taken hold—and it was all caught on tape (unbeknownst to all but Nixon and a few of his top advisors). But it took the leadership of the Republican Party to stand up to Nixon to force his resignation—leaders like Goldwater, Howard Baker of Tennessee, and Hugh Scott of Pennsylvania.

The final straw for Nixon, as it should be for Trump, came from words he uttered himself while an audio recording was being generated. In both cases, the men should have been aware they were being recorded. With Nixon, he believed no one would ever know of his taping system—it was a carefully guarded White House secret. In Trump’s situation, he no doubt forgot about it, as it was probably an incident that was unremarkable to him—he likely had uttered similar disgusting thoughts and words about women in one form or fashion on a regular basis. Why would he remember this incident over any other?

Nixon’s downfall traced to a tape recording from June 23, 1972, arising out of a meeting between Nixon and his chief of staff, H. R. “Bob” Haldeman in the Oval Office. The tape has become known in Watergate lore as the “smoking gun tape.” Nixon met with Haldeman on June 23, the Friday after the Watergate break-in, to talk more about how to control the nascent investigation. Haldeman reported what John Dean had been told by Attorney General John Mitchell the night before—the president should instruct the CIA to ask the FBI to curb its investigation into Watergate under the so-called delimitation agreement between the two agencies. The FBI and CIA had a long-standing understanding that if an investigation by one would uncover strategic or covert activities of the other, the investigation would stop.

In the case of Watergate, the White House knew that one of the masterminds of the break-in was E. Howard Hunt, a former CIA operative. Hunt had been closely involved with the Bay of Pigs invasion of Cuba, a role that ultimately led to his being discredited and his early retirement from the CIA. Hunt, though, was picked up by the White House (he knew presidential advisor Charles Colson as a Brown University alumnus) and became one of the White House “plumbers” along with G. Gordon Liddy.

On the tape of June 23, Nixon is told of the recommendation to have the CIA contact the FBI to put a hold on any investigation of campaign money that flowed through Mexico that may have been used to finance the Watergate burglars. It might lead, Nixon was told, to Hunt, and this then could then raise anew the whole Bay of Pigs fiasco, a wound the CIA still carried a decade later. Nixon went further and ordered an end to the Watergate investigation, period.

When the Supreme Court finally ordered Nixon to turn over his tapes in July 1974, the “smoking gun tape” was heard for the first time. It disproved Nixon’s main defense—that he knew nothing about the cover-up until March 1973 when John Dean told him about it in his famous “cancer on the presidency” warning.

With its release, the last vestiges of support for the president in Congress evaporated. The leaders of the Republican Party recognized the need to act and act decisively to save the nation and to save their party. Goldwater, a leader not given his historical due, understood the stakes better than most and he chose country over party.

The result was tumult in the Republican Party in the short term, but out of the disaster Ronald Reagan arose just six years later. Regardless of what one thinks of Reagan’s presidency, there is no doubt the Republican Party removed the stench of corruption and quickly regained its footing as a legitimate, moral power in American politics. The same is still possible for the Republican Party if the leaders act resolutely. If not, they risk the destruction of their party and the principled leadership of the United States of America at home and abroad.