How Can We Stop Police from Killing Black People?

Michael J. Pfeifer is professor of history at the John Jay College of Criminal Justice and the CUNY Graduate Center and is the author and editor of five books on the history of American and global lynching, including "Global Lynching and Collective Violence, Vol. 1: Asia, Africa, and the Middle East" (University of Illinois Press, 2017). 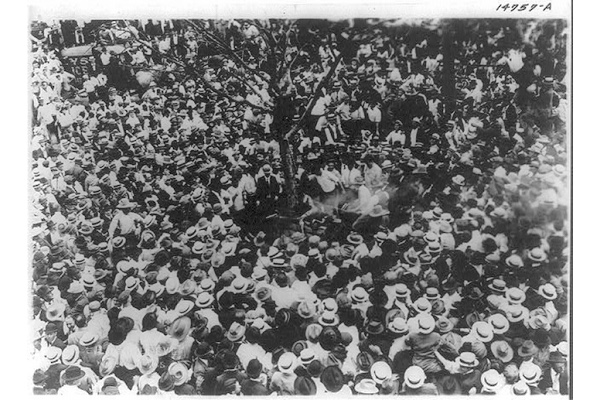 A crowd of thousands gathers in Waco, Texas to watch the lynching of Jesse Washington, 1916

The recent fatal police shootings of Keith Lamont Scott in Charlotte and Terence Crutcher in Tulsa, along with a series of well-publicized lethal police encounters with African American men in recent years, including Michael Brown in Ferguson, Missouri, in 2014, and Philando Castile in Falcoln Heights, Minnesota, in July 2016, have provoked conversation over a phenomenon of racialized policing with deadly force that some on social media and elsewhere have called “lynching by bullet.” Equating brutal racially disparate policing with lynching, extralegal killing that disavowed due process law often in favor of racist goals, is not mere hyperbole. American lynching emerged and declined in direct relationship with the development of the American criminal justice system, including practices of the death penalty and policing. Moreover, the declining incidence of lynching in the early to mid twentieth century may offer historical lessons as we seek to comprehend and confront the problem of lethal racialized policing today.

Diverging significantly from England and western Europe, the United States’ transition to a capitalist economy was not accompanied by the emergence of a strong, centralized national state that claimed and enforced an exclusive monopoly over violence and the administration of criminal justice to secure the rule of law. Rather, American criminal justice developed along a distinctive path that emphasized local authority and opinion, self-help and ad hoc law enforcement practices, and the toleration of extralegal violence. Lynching was an important aspect of this distinctive American trajectory from the late eighteenth through the early twentieth centuries, evolving from traditions of popular violence with roots in the early modern British Isles but registering many Americans’ rejection of due process and the exclusive claims of state authority in criminal law.

The formation of American criminal justice was a highly contested process, as lawyers, judges, and middle class reformers fought for due process and the rule of law against rural elites and working class people who sought to retain “rough justice,” that is, criminal justice grounded in local prerogatives of race, ethnicity, class, honor, gender, and crime control. Because of factors of demography, economics, and historical development that included slavery, westward migration, urbanization, and industrialization, the due process forces were at their strongest in the Northeast but weakest in the South, with the West and Midwest lying in between.

White Americans seized upon lethal group violence unsanctioned by law—especially hangings—to enforce mandates of racial and class hierarchy and to pull into definition tenuous and ill-defined understandings of social order and community. American mobs acting out the punitive rough justice vision would lynch thousands of persons over the nineteenth and early twentieth centuries, including several thousand African Americans, as well as hundreds of Mexicans, Native Americans, and whites, and dozens of Chinese and Sicilians.

The conflict between rough justice and due process sentiments persisted for decades after the Civil War and Reconstruction in the American regions beyond the Alleghenies. Vividly recalling the emancipation of the slaves and Reconstruction in the 1860s and 1870s as an era in which they had lost control of the social order, criminal courts, and political offices, many white southerners turned again to collective murder outside the law amid racial and political conflict shaped by the depressed cotton economy of the 1890s.

In a contagion of collective murder that was less overtly political and less systematically organized but even more racial than the collective violence of Reconstruction, lynching became a prime means of punishing black resistance and criminality for white southerners skeptical of the efficacy of law and legal processes in the perpetuation of white supremacy in the New South.  White southern lynchers in a sense inherited the roles of both the slaveholder, who had enjoyed broad legal color to physically punish enslaved human property, and of the slave patrol, bands of white southerners that policed African American movement off the plantation during the slavery era.

In some southern jurisdictions such as Ouachita Parish, Louisiana, whites completely ignored the formal criminal justice system when it came to allegations of black wrongdoing, preferring lynching as a means of responding to accusations that African Americans had breached an increasingly rigid racial hierarchy; whites lynched twenty-nine African Americans in Ouachita Parish between 1878 and 1919. Southern urbanization and industrialization at the turn of the twentieth century catalyzed anxieties over racial mixing and in some cases provided the setting for large-scale spectacle lynchings, but eventually a southern white middle class coalesced against mob violence.

Embarrassed by the increasing spotlight African American activists such as Ida B. Wells and the National Association for the Advancement of Colored People (NAACP), the southern white activist Jessie Daniel Ames and the Association of Southern Women for the Prevention of Lynching (ASWPL) shone upon lynching, middle class white southerners in the early twentieth century pressed instead for "legal lynchings," expedited trials and executions that merged legal forms with the popular clamor for rough justice. For instance, in north Louisiana, which had been one of the most lynching-prone areas in the American South, mobs killed an average of 6.4 lynching victims a year in the first decade of the twentieth century, but this slipped to 3.9 in the 1910s, and 1 per year in the 1920s. As the frequency of lynchings in the American South plummeted in the middle decades of the twentieth century, the practice went underground as lynchers no longer acted in large public mobs but instead in small, secretive groups that murdered in an expression of racial intimidation that by the late twentieth century was more often called a "hate crime" than a "lynching.” Southern (and northern) police forces in the twentieth century also assumed functions that had previously been left to non-state actors such as slaveholders, the slave patrol and after the Civil War, to lynch mobs: the extralegal use of lethal force to punish allegations that African Americans had breached the color line by, for example, physically harming whites or threatening violence against police officers.

What lessons does this disturbing but crucial history of the entanglement of American lynching, policing, and criminal justice hold for us today as we confront a seemingly endless series of fatal police shootings of African Americans, amplified by social media and Americans’ conflictual views of criminal justice and racial disparities? Lynching declined significantly in the early to mid twentieth century as activists embarrassed white southerners and other white Americans into disavowing mob violence. By the 1940s, federal officials, worried about how Nazi and then Soviet propagandists used America’s blight of racial lynching to scorn the claims of American democracy, in turn disavowed doctrines of federal non-interference in state criminal justice matters to increasingly investigate and prosecute lynchers. While in the 1890s and in the first decades of the twentieth century, lynchings sometimes attracted thousands of whites hoping to witness a spectacle of white supremacy, by the 1940s and 50s, the practice had gone largely underground, with racial killings performed by small numbers of committed racists. In short, prolonged activism, a withering national and international spotlight, and the threat of federal involvement ended the lynching era. Perhaps today’s spotlight of social media and a parallel awakening of Americans to a serious problem in the functioning of American democracy can affect a similar social change.