Are We Going to Repeat the Tragic Folly of Our Ancestors? 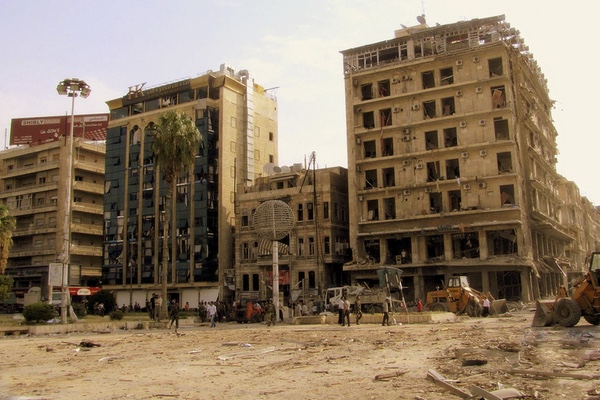 The scene of the October 2012 Aleppo bombings by Zyzzzzzy, CC BY 2.0

Think of all the tragedies our past behavior has inflicted upon other people. By “our” I mean we human beings as a whole. As historians, we regularly recount such behavior, especially when we deal with wars, holocausts, or other tragedies—for example, Adam Hochschild’s account in King Leopold’s Ghost of how the Belgian king’s policies (1885-1908) caused millions of African deaths in the Congo.

While writing of such tragic actions do we historians have any responsibility to help readers see how and why we humans so often make others suffer? I think we do.

Barbara Tuchman may have fulfilled this task when she wrote The Guns of August (1962). According to Robert Kennedy , JFK was influenced by it and during the Cuban Missile Crisis was determined to avoid miscalculations like those “of the Germans, the Russians, the Austrians, the French and the British” in 1914. “They somehow seemed to tumble into war, he said, through stupidity, individual idiosyncrasies, misunderstandings, and personal complexes of inferiority and grandeur.” Instead of following the wishes of some of his military advisors who urged the bombing of Soviet missile installations in Cuba, the president took the less risky step of imposing a naval blockade. His caution may well have prevented a U.S.-Soviet nuclear war with all the suffering such a war would have entailed.

Tuchman also wrote The March of Folly: From Troy to Vietnam (1984). In it she highlighted four cases of government folly that led to great suffering, and she asked (and attempted to answer), “Why do holders of high office so often act contrary to the way reason points and enlightened self-interest suggests?” Another historian, Alistair Horne in his Hubris: The Tragedy of War in the Twentieth Century, suggested one reason when he wrote that “wars have generally been won or lost through excessive hubris on one side or the other.”

More recently, Andrew Bacevich in his America’s War for the Greater Middle East: A Military History (2016) writes of four assumptions that contributed to what he regards as the U.S. government’s misguided Middle Eastern policies of the last third century. “None of these assumptions,” he writes, “has any empirical basis. Each of the four drips with hubris.” Like Senator William Fulbright in his The Arrogance of Power (1966) and Senator Robert Byrd in a Senate speech in 2003, he has concluded that U.S. foreign policy has too often reflected hubris.

Certainly one reason Tuchman, Horne, and Bacevich wrote their books was to help us learn from our past mistakes and thereby reduce the world’s suffering. This suffering has been caused by many countries and people. And it is not just the Hitlers, Stalins, Maos, and Pol Pots of the past who are guilty, but some of our U. S. leaders (and followers) as well.

In a chapter on twentieth century violence in An Age of Progress? (2008), I quoted the following words of a U.S. officer regarding the military treatment of Filipino guerrillas (and others) resisting the U. S. takeover of their country following the Spanish-American War (1898): “Our men have been relentless, have killed to exterminate men, women, and children, prisoners and captives, active insurgents and suspected people, from lads of ten up, an idea prevailing that the Filipino was little better than a dog, a noisome reptile in some instances, whose best disposition was the rubbish heap.”

Not long ago on this site, “Yes, Native Americans Were the Victims of Genocide” appeared. It persuasively argued that our white ancestors were indeed guilty of imperialism and “settler colonialism [which] requires a genocidal policy.” Along with inflicting tragedies too numerous to enumerate on Native Americans, we did the same thing to African Americans in the days of slavery (what Ken Burns has called our original sin) and beyond. Consequences of that abomination helped give birth to our Civil War, which produced more U. S. deaths than WWI and WWII combined, and later segregation and other forms of discrimination.

While it is common to think that western Europeans, along with the USA, are the “good guys,” while the Germans, Russians, Chinese, and Japanese under leaders like Hitler, Stalin, and Mao Zedong were more often the “bad ones,” the western Europeans also have much blood on their hands.

By the early twentieth century, nine western European countries controlled over four-fifths of the earth’s lands. Besides Belgian policies in the Congo, other European actions like those of the French in Indochina caused great suffering.

And why did they do so? Certainly for economic and military reasons, but also because the Western powers (including the USA) convinced themselves they were bringing true religion or “civilization” to backward peoples. For example, U. S. President McKinley justified taking the Philippines in these words: “There was nothing left for us to do but to take them all, and to educate the Filipinos, and uplift and civilize and Christianize them.”

By 1970 many of the colonial powers had given up their colonial territories obtained by imperialist methods, but old habits, old senses of white superiority, continued to exist. After the French pulled out of Indochina (including Vietnam) in 1954, the United States gradually became embroiled in the region. Fighting the spread of communism was our official reason, but U.S. arrogance and sense of superiority also played a role. The net effect of our involvement there was to multiply tragedies, contributing heavily to millions of deaths, most of them Indochinese but also tens of thousands of Americans.

Following the Vietnam War’s end in 1975, there were still many wars in the last quarter of the past century. To take just one example, in Sudan between 1983 and 2000, ethnic conflict and civil war led to about 2 million deaths. In 1999, according to the Stockholm International Peace Research Institute, there were “27 major armed conflicts in 25 countries.” During the 21st century, we humans have continued large-scale killing in such places as Iraq and Syria.

Several years ago psychologist Steven Pinker’s noteworthy The Better Angels of Our Nature: Why Violence Has Declined (2011) proclaimed that “violence has declined over long stretches of time, and today we may be living in the most peaceable era in our species’ existence.” Although he makes many good points, it is difficult to take much comfort from his assertions when we read and see what is going on in Syrian areas like Aleppo today.

According to a recent UN report, “Syria is one of the most complex and dynamic humanitarian crises in the world today. Since March 2011, over a quarter of a million Syrians have been killed [another source estimates the deaths at almost a half million] and over one million have been injured. 4.8 million Syrians have been forced to leave the country, and 6.5 million are internally displaced, making Syria the largest displacement crisis globally.”

There are numerous reasons why all this suffering continues, way too many to enumerate here. But four that seem most prominent are arrogance, irrationality, groupthink, and a lack of moral imagination.

About arrogance enough has already been said except to note one of the most prominent recent manifestations of it, “American exceptionalism.” Although the term has been used in many different ways, here it is meant the way Joyce Carol Oats used it in a 2007 essay:

Our unexamined belief in American exceptionalism has allowed us to imagine ourselves above anything so constrictive as international law. American exceptionalism makes our imperialism altruistic, our plundering of the world’s resources a healthy exercise of capitalism and “free trade.” From childhood, we are indoctrinated with the propaganda that America is superior to other nations; that our way of life, a mass-market “democracy” manipulated by lobbyists, is superior to all other forms of government; that no matter how frivolous and debased, our American culture is the supreme culture, as our language is the supreme language; that our most blatantly imperialistic and cynical political goals are always idealistic, while the goals of other nations are transparently opportunistic.

Regarding irrationality, human actions are more often based on instincts, feelings, and beliefs than on rational considerations. As psychologist Dan Ariely writes, “We are not only irrational, but predictably irrational.” In his The Assault on Reason (2007) Al Gore asked, "Why do reason, logic and truth seem to play a sharply diminished role in the way America now makes important decisions?" Historian Rick Shenkman in his How Our Stone-Age Brain Gets in the Way of Smart Politics (20116) states, “evidence is abundant that public opinion is often not rational and that multiple forces, some unseen [including Stone-Age instincts], are shaping our response.”

Groupthink occurs because not many people in any society are original, creative, imaginative thinkers. Most of us go along with the prevailing opinions in our society, or at least in our group or subculture. If you lived in the antebellum South and public opinion supported slavery, you were unlikely to oppose it.

Groupthink reflects a paucity of imagination. In his Ethics and the Quest for Wisdom Robert Kane writes, “Humans are prone . . . to leap to violence too soon as a means of resolving conflicts. We often use more force when less force will do.” As he points out, it took individuals like Mahatma Gandhi and Martin Luther King Jr. to imagine new ways of dealing with violence that would lessen human tragedies.

But in his book Moral Imagination (see review here) David Bromwich has emphasized how prevalent this flaw continues to be among the makers of U. S. foreign policy. Already in 1968 writer Wendell Berry in “A Statement against the War in Vietnam” stated, “We have been led to our present shameful behavior in Vietnam by this failure of imagination, this failure to perceive a relation between our ideals and our lives.” Today, as both Bromwich and Bacevich stress, our foreign policy continues to be unimaginative. Although Bromwich emphasizes “moral imagination,” Bacevich also used the term in 2007 referring to our lack of it in continuing the war in Iraq. Such an imagination implies using it for moral purposes and employing such virtues as compassion and empathy.

Although the stress in this essay has been on U.S. unwise behavior that has created tragic consequences for others—Native Americans, African Americans, Filipinos, Vietnamese, and Middle Easterners, to name just the most obvious peoples—such tragic folly has been widespread globally and continues to be so. To name just a few prominent examples, assorted terrorists, Syrian President Bashar al-Assad, and Russian President Vladimir Putin, who supports Assad forces in Syria, have also inflicted ample suffering on unfortunates in Syria and elsewhere.

Although Rick Shenkman has commented that “we historians cannot even agree on the past, let alone the future,” the title of this essay asks a question about the future: “Are We Going to Repeat the Tragic Folly of Our Ancestors?” All this essay has done to answer it is to suggest we should not be overly optimistic. We may realize that something like slavery was wrong in the past, but arrogance, irrationality, groupthink, and a lack of moral imagination do not seem to be subsiding. We are still capable of colossal future folly.

Moreover, these four failings are not just causing great suffering in the present in places like Syria, but they also threaten our collective future. Unless we display more humility, rationality, and moral imagination—and quickly—in regard to global warming and climate change we may outdo our ancestors in our display of tragic folly.