Walter G. Moss is a professor emeritus of history at Eastern Michigan University. He is also a Contributing Editor of HNN and the author of books, essays, and reviews that deal with many of the same themes treated in “Moral Imagination.” For a list of all his recent books and online publications, go here. 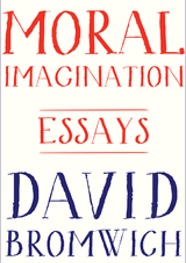 In Moral Imagination’s dozen essays David Bromwich focuses on important topics: terrorism and war, patriotism, cultural identity, 9/11, the American character, Abraham Lincoln, Edward Snowden and the decline of privacy, and the arrogance of U.S. foreign policy as demonstrated by Dick Cheney and others. But the book’s first essay, “Moral Imagination,” is the most significant of all.

Bromwich is mainly interested in this quality on a national scale, and he identifies it as “the power that compels us to grant the highest possible reality and the largest conceivable claim to a thought, action, or person that is not our own, and not close to us in any obvious way.” It involves compassion and empathy. He traces the concept back to the eighteenth-century Irish-English statesman Edmund Burke, the subject of his The Intellectual Life of Edmund Burke (2014). But he then outlines its development through others like the English Romantic poets and Lincoln down to Martin Luther King’s 1967 speech “A Time to Break Silence.” In it “King imagines himself in the position of the Vietnamese under the bombing sorties of B-52s, or the casualties of what was called the ‘pacification program.’ ” Bromwich has had much more to say about this great speech in his “Martin Luther King's Speech Against the Vietnam War,” but unfortunately this essay is not included in Moral Imagination.

Just a year after King’s speech, Kentucky writer Wendell Berry in “A Statement against the War in Vietnam” (1968) stated, “We have been led to our present shameful behavior in Vietnam by this failure of imagination, this failure to perceive a relation between our ideals and our lives.” As I have indicated in a previous essay, Berry has subsequently lamented our lack of imagination, what Bromwich would call our moral imagination, “in government, in the corporate economy, in the universities,” and in our foreign policy.

Although the essays in Moral Imagination were written for different occasions over the past two decades, Bromwich believes that they are united by their concern with power, conscience, and moral imagination. In the post-Cold-War era, he thinks that too often the U.S. government has wished “to stand unopposed at the center of the world. This ambition is conventional, not particularly democratic, and in no way imaginative.”

In his book’s second essay, he attempts to demonstrate how cultural identity “presumes and works to reinforce a social fixity that obstructs imagination.” His argument against overemphasizing cultural identity reminds one of that of the Indian-born economist Amartya Sen in his Identity and Violence: The Illusion of Destiny(2006). There Sen notes that twentieth-century violence was often encouraged by rigidly classifying people according to a single classification, such as race, ethnicity, nationality, or religion, and forgetting that all humans have multiple identities and share common numerous human qualities. In still another book, Political Violence in Twentieth-Century Europe, we come across this sentence: “The greatest potential for mass violence in twenty-first-century Europe appears to reside in conflicts of ethnic or religious identity.”

To Bromwich’s mind his third essay, “The Meaning of Patriotism in 1789,” presents “a pertinent comment on a related theme: the recent acceptance of the inevitability of nationalist loyalties.” In examining a debate between Edmund Burke and Richard Price, a moral philosopher at the University of Glasgow, Bromwich sides more with Price, who believed that citizens should follow the example of the Bible’s Good Samaritan. “Price stresses at the outset that the Jews

and Samaritans were rival nations, which ‘entertained a hatred of one another.’ ” Thus, in reflecting on the story of the Samaritan, Price is arguing “for sympathy without regard to nation or person,” for compassion and the use of moral imagination that extends to foreigners. Bromwich goes even further than Price. He argues that “the cure for the indiscriminate hatred of a community that is not one’s own” should come from realizing the common humanity of all individuals regardless of nation. His argument calls to mind Thomas Hardy’s poem “The Man He Killed,” which reflects on killing a fellow human being just because he comes from another nation and ends with the lines:

“Yes; quaint and curious war is!

You shoot a fellow down

You'd treat if met where any bar is,

Or help to half-a-crown.”

The next three essays (in Part Two) all deal with Lincoln. Two of them link him with writers that Bromwich, a professor of literature, greatly admires: Shakespeare, whose tragedies heavily influenced Lincoln, and the poet Walt Whitman, who shared many of his ideals. Like others that the professor admires—“Wordsworth, Ruskin, Gandhi, Virginia Woolf, and Martin Luther King”—Lincoln, Shakespeare, and Whitman all displayed moral imagination. The third Lincoln essay, “Lincoln’s Constitutional Necessity,” insists that Lincoln believed that the North's going to war to prevent the South’s secession was a “constitutional necessity”—as Lincoln said in his First Inaugural Address, “the central idea of secession is the essence of anarchy.” Bromwich also defends Lincoln’s moderate approach to ending slavery. “Only a man of ostensibly moderate political complexion” could have been elected president and issued the Emancipation Proclamation.

In his “American Imagination and the Civil War” (2007), Wendell Berry takes a less laudatory approach to Lincoln. Although crediting Lincoln and Confederate General Robert E. Lee with some moral imagination, the Kentucky writer believes that once the war started, each man became “an instrument of an immense violence which . . . was beyond their power to mitigate or stop, and which made of their imagination only a feckless suffering of the suffering of others.”

The three essays in Part Three deal with U.S. national character. In “The American Psychosis” Bromwich surveys various works of literature to demonstrate that “the flow from the heart, the warmth of fellow-feeling which has animated Europe and been the best of her humanity . . . seems unable to persist on the American soil.” His approach reminds one of that of Henry Steele Commager, who in his The American Mind: An Interpretation of American Thought and Character since the 1880s (1950) noted how many writers were critical of our “acquisitive society,” of “an economy that wasted the resources, paralyzed the energies, and corrupted the spirits of the people.” Toward the end of his essay Bromwich laments that “by comparison with money, the soul has lapsed to the inferior reality of an entity that cannot be modified or exchanged.” Although he does not address the growing U.S. inequalities of our day and the hard-heartedness often demonstrated toward the poor, these phenomena flow partly from the self-absorption, lack of “fellow-feeling,” and paucity of moral imagination which he describes.

His next essay “How Publicity Makes People Real” (2001) describes a phenomenon that has only accelerated in the last dozen years. “All of the data of mass culture conspire to persuade us that we hardly exist outside the social world in which we are most visible.” Bromwich is insightful in describing why so many of us are willing to sacrifice our privacy for more public exposure. The same phenomenon helps explain the modern fascination with celebrities, some of whom display few admirable traits.

Part Three’s third essay, “The Self-Deceptions of Empire,” appeared in 2008. The occasion for it was the printing of a new edition of theologian and social critic Reinhold Niebuhr’s The Irony of American History (1952). Criticizing U.S. arrogance, Niebuhr saw “more searchingly than others . . . the combined effects of the belief in America’s uniqueness and a commitment to worldwide expansion.” Bromwich admires “him as an iconoclast of the jargon of exceptionalism,” which neoconservatives have often trumpeted. His appreciation of Niebuhr’s book is akin to that of Andrew Bacevich, who in the Introduction to the 2008 edition referred to it “as the most important book ever written on U.S. foreign policy.”

Part Four also contains three essays. The first, “What Is the West,” criticizes Niall Ferguson’s Civilization: The West and the Rest (2011). Bromwich objects to its assumptions, organization, and style. Its tone, he says, “suits the message of the book: a dominant civilization must not hesitate to sing its own praises.” He believes that “Ferguson is a patriot of the West,” biased toward it, and an admirer of British imperialism, all of which lead him to misinterpret history.

The following essay, “Holy Terror and Civilized Terror” is a revised version of a review of two books on terrorism. Bromwich defines the term as “the murder of persons of no political or military status in order to achieve a political end.” Since innocent civilians are also often killed in wars, Bromwich perceives “a strong continuity between terrorism and war,” and he is equally critical of the evils that stem from both types of violence. One of the books he reviews is Robert Pape’s Dying to Win: The Strategic Logic of Suicide Terrorism, which is based on an “exhaustive database on suicide terrorists.” Bromwich usefully analyzes the motives of such terrorists. As a result of the “emergency state of mind” produced by the terrorism of 9/11/2001, he believes that the U.S. government has justified all sorts of excesses.

The book’s final essay, “Comments on Perpetual War,” is really a stringing together of five shorter essays: “Cheney’s Law,” “Euphemism and Violence,” “William Safire: Wars Made out of Words,” “What 9/11 Makes Us Forget,” and “The Snowden Case.” Bromwich harshly criticizes Cheney and conservative journalist Safire—“he never stinted his approval of wars.” But he defends Snowden against various critics and shares his condemnation of the government’s violation of citizens’ privacy. Although during the Bush Jr. presidency the reaction to 9/11, including Bush’s Iraq war, demonstrated “the bankruptcy of the foreign-policy elite,” a decade after 9/11 Bromwich saw little improvement under President Obama. “He lacked the knowledge, the penetration, the stamina, and the political courage to effect” the change his presidential campaign had suggested, “and in his passivity he was abetted by a choice of advisers utterly confined to adherents of the pro-war consensus. So we are still in a history that began on 9/11. . . . What Cheney innovated and Bush signed off on, Obama has ratified and made normal.”

Although Moral Imagination is an important book, it has its faults. They mainly stem from the nature of the collection: a bringing together of occasional writings spanning two decades. The book as a whole lacks the conciseness and focus that it might have if Bromwich sat down today and composed a single monograph on similar topics. Nevertheless, the patient reader will be well rewarded by the author’s many insights into some of our nation’s most pressing concerns.