William Lambers is an author who partnered with the UN World Food Programme on the book Ending World Hunger. His writings have been published by the New York Times, Cincinnati Enquirer, Boston Globe, Cleveland Plain Dealer and the Huffington Post. 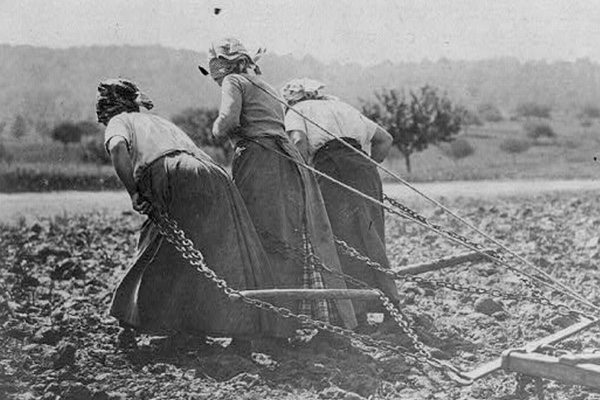 Peasants in the re-taken Somme District work hard without horses or cattle. The Germans in retreat have taken all live stock (Library of Congress)

What were the news headlines 100 years ago today? Imagine what stories you would see on cable TV or in your Facebook news feed if the year were 1916.

The top story would undoubtedly be World War I and the Battle of the Somme, which started in July, 1916.

British and French forces took on the German army near the River Somme in northern France. It was a senseless slaughter that claimed thousands of lives even in the first days of the battle, which lasted for several months.

There were a million casualties in the Battle of the Somme, making it one of the bloodiest in history. That is about equal to the entire population of Rhode Island.

The Somme and other battles of World War I not only show the horrifying toll of war, but also its dreadful impact on society. War’s shock effects reverberate even when guns are not firing.

When the British and French retook 30 villages early in the offensive, it must have been eerie to find every civilian had disappeared, except for one farmer who hid in a cellar from the Germans.

That farmer and others obviously could not be out working in his fields, growing the nation’s food supply. In fact, many farms met a terrible fate.

Farm buildings and equipment were destroyed by the war. Once prosperous growing land was reduced to craters from the shelling. It was reported that green grass had completely vanished in many areas.

Warnings were sent globally as the war continued. A special dispatch to the Cincinnati Enquirer in 1917 read, “All the world is threatened seriously with famine because of the withdrawal of men from agriculture, the lack of fertilizers and the derangement of transportation facilities.”

The dispatch warned that even peace would not bring an immediate end to the crisis. Food aid would be needed until the farmers could rebuild and restart their own production again. The hunger tragedy always outlasts the war itself.

The devastation of World War One left French agriculture reeling. Herbert Hoover wrote of France “A belt of once fertile land on both sides of the trench lines was so torn that it required years for restoration.” American aid was vital to helping France overcome the food crisis.

War not only brings death from guns and shelling, but also from starvation. That is an important lesson of war we must remember. Its rippling effect goes far and wide.

That tragedy within the tragedy of World War One is being repeated today.

Syria has lost much farmland during its five-year civil war. Syrian agriculture has not only suffered from warfare, but also natural disasters including drought and winter storms.

Farming is hard enough with weather calamities, but when you add war and displacement you have a total collapse of food producing systems.

Yemen, which has its own civil war, has seen agriculture reduced too. The UN World Food Programme (WFP) says “Shortages of seeds and fertilizers have crippled crop production across Yemen, where around 50 percent of the labour force earns their living from the agriculture sector and related activities.”

We must do everything we can to support the farmers in these countries and help them recover their land.  There are things that can be done to help farmers through conflict and also in the crucial reconstruction stage.

One of the innovative approaches comes from Syria where WFP and the Food and Agriculture Organization are rebuilding greenhouses and providing seeds and irrigation to farmers.

In Tartous some of the farmers are now growing tomatoes again. “This programme is rebuilding greenhouses as well as the resilience of thousands of Syrian farmers and displaced people who lost their sources of income,” says Abdirahman Meygag, WFP Syria Deputy Country Director.

Jordan has heroically taken in many Syrian refugees, at great strain to their country. Productive plans to bring livelihoods to these refugees, while also helping the host communities, are crucial.

One plan the WFP has started enables purchases of fresh fruit and vegetables from Jordan’s farms for school feeding programs. The supplies will help feed Syrian schoolchildren at the Zaatari and Azraq refugee camps. We need to make sure it gets the needed support to continue the school year.

Catholic Relief Services says that seeds equal hope for farmers in war-torn South Sudan. The charity actively helps South Sudanese farmers through its Jonglei Food Security program. That is a step toward peace.

The attacks in Africa by Boko Haram have forced thousands of farmers to abandon their fields in Nigeria and Cameroon. These farmers and their communities need our help.

In Niger, which has been affected by Boko Haram and drought, the local farmers are crucial to supporting WFP’s major school feeding initiative. In fact, these school meals are provided to children displaced by Boko Haram's attacks. Funding is needed to ensure this program continues.

There is much we can do to help farmers and their nations.

The U.S. Food for Peace and Feed the Future initiatives help small farmers in developing countries by giving them the tools to succeed whether it’s equipment, technology or seeds. These programs should be expanded especially with global displacement at record levels.

The Congress must now ensure more funding for Food for Peace, which will provide more war relief in Syria and elsewhere.

War is the enemy of agriculture. The Battle of the Somme and today's conflicts illustrate this tragedy. But we can take action to save millions from starvation by giving farmers the support they desperately need.