Marwan M. Kraidy is Anthony Shadid Chair in Global Media, Politics and Culture at the University of Pennsylvania and the author of The Naked Blogger of Cairo: Creative Insurgency in the Arab World (Harvard University Press, June 2016)

Uprisings spread like wildfire across the Arab world from 2010 to 2012, fueled by a desire for popular sovereignty. In Tunisia, Egypt, Syria, and other countries, protestors flooded the streets and the media, voicing dissent through slogans, graffiti, puppetry, videos, and satire that called for the overthrow of dictators and the regimes that sustained them. 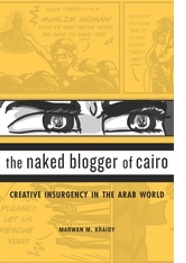 Much—too much—has been said about the role of digital media in the Arab Spring, but how humans interact with technologies they operate remains unclear. Technology publicizes dissent, but the human body is the indispensable medium. From the Roman slave revolt to the French Revolution, from the Egyptian Revolution of 1919 to the Civil Rights movement, insurgents have struggled for freedom and dignity first and foremost trough their bodies latching to it the technical gadgets of the day.

With the rise of digital culture, considering the human body as a vital nexus of physical struggle and virtual communication helps us realize that distinctions between expression and action, mind and matter, the Internet and the “real world” are actually flimsy. Consider how that foundational act of the uprisings, Mohamed Bouazizi’s self-immolation—painful, spectacular, embodied—reverberated in gritty graffiti, protest slogans, and digital memes.

Philosophers have discerned this for a long time: Baruch Spinoza in Ethics and Michel Foucault in Discipline and Punish have underscored the interplay of social, physical, and psychic forces in the body. Long before the digital era, Henri Bergson considered the body a “center of action” that perceives, synthesizes, manages, and redistributes images and human action in relation to the objects that surround us. His confrère Maurice Merleau-Ponty, whose Phénoménologie de la Perception lay the ground for understanding embodied communication, wrote, “My body is the fabric into which all objects are woven, and it is, at least in relation to the perceived world, the general instrument of my ‘comprehension.’”

New-media scholars have built on these theories to argue that corporeality plays an ever more vital role in the digital age because the human body filters a plethora of images spawned by media convergence. This works in two directions. Digital culture “disperses” bodily experience across cyberspace. But as I show in The Naked Blogger of Cairo, the body anchors ideas and binds styles in mesmerizing, hybrid forms: operated by human hands and featuring handmade miniature bodies, the Syrian insurgent web-series Top Goon is at once revolutionary theater, finger puppetry, political satire, and digital video.

The book’s eponymous stunt, the Cairene university student’s blogging of a full-body naked selfie with an inflammatory political screed, is a hybrid of art, pornography, and political activism. Activists challenged authority in brazen acts of self-immolation, nude activism, and hunger strikes. As dictators doubled-down on political metaphors, their bodies became a focus of ridicule. A web series presented Syria’s Bashar al-Assad as a pathetic finger puppet, while cartoons and videos spread a meme of Egypt’s Hosni Mubarak as a regurgitating cow. From Cairo to Manama, graffiti pit heroic bodies of revolutionaries against repressive bodies of tyrants. Body symbolism was front and center in the reclamation of public space: fingers, faces, lips, palms, fists, and eyes were ubiquitous in street protests and insurgent art.

Why is the body fundamental to the Arab uprisings? History tells us that corporeal metaphor is central to political power: from before Louis XIV to after Bashar al-Assad, the sovereign’s figure is the body of the realm. Writing in Baghdad and Damascus during the tenth century, the Islamic Golden Age philosopher and translator al-Farabi cast the ideal polity as a healthy body, and he described in The Perfect State different parts of the state as limbs, ruled by a commanding organ, the heart, that unifies their efforts toward achieving the contentment of the community. In The King’s Two Bodies: A Study in Mediaeval Political Theology, the German-American historian Ernst Kantorowicz traced a concept of “body politic” that envisions a kingdom as a human body, the king as its head and his subjects as organs and limbs. Developing fully in Elizabethan England, this notion recurred for centuries in European political thought and popular culture, from Rousseau’s essays to Shakespeare’s plays, and became influential in France in the sixteenth century. During the French Revolution, corporeal symbolism focused on separating the king’s biological body natural from his symbolic body politic.

Whereas in medieval Europe the body politic belonged to the sacred, at the onset of the recent uprisings in Egypt, Syria, and Tunisia the body politic was resolutely worldly. But body imagery remains important to modern, secular absolutism. Creative insurgencies against Assad, Ben Ali, Mubarak, and Sisi subvert the imagery propagated by cults centered on the leader’s figure. In the Arab world and beyond, the body is foundational to the rise and fall of dictators.

Investigating what drives people to risk everything to express themselves in rebellious art, The Naked Blogger of Cairo uncovers the creative insurgency at the heart of the Arab uprisings. While commentators have stressed the role of social media, I show that the essential medium of political expression was not cell phone texting or Twitter but something more fundamental: the human body. Brutal governments that coerced citizens through torture and rape found themselves confronted with the bodies of protestors, burning with defiance and boldly violating taboos.

By dissecting how rulers and activists depict power, revolution, and counter-revolution, The Naked Blogger of Cairo foreshadowed the rise of the strongman as an iconic figure in global politics. Like Assad and Sisi, Turkey’s Erdogan, Russia’s Putin, India’s Modi, and America’s Trump paint themselves as saviors of nations and leaders of renewal based on claims of virility fueled by body symbolism and digital deception and manipulation.

The rise of digital culture complicates our understanding of the human body in political dissent. Technology publicizes defiance, but the body remains the vital nexus of physical struggle and digital communication, destabilizing distinctions between “the real world” and virtual reality, spurring revolutionary debates about the role of art, and anchoring Islamic State’s attempted hijacking of creative insurgency. In struggles past and present, by connecting ideas and action, perceiving, producing, processing, and disseminating images and feelings, the body is the linchpin of revolutionary change. Digital gadgets often assist, and sometimes enhance, but they have not replaced the human body as the primary political medium.