Reflecting on the Charleston Syllabus One Year Later

Chad Williams is associate professor and chair of African and Afro-American studies at Brandeis University and is the author of Torchbearers of Democracy: African American Soldiers in the World War I Era. Kidada E. Williams is associate professor of history at Wayne State University and the author of They Left Great Marks on Me: African American Testimonies of Racial Violence from Emancipation to World War I. Keisha N. Blain is assistant professor of history at the University of Iowa. Her work has been published in the Journal of Social History; Souls: A Critical Journal of Black Politics, Culture, and Society; and Palimpsest: A Journal on Women, Gender, and the Black International. 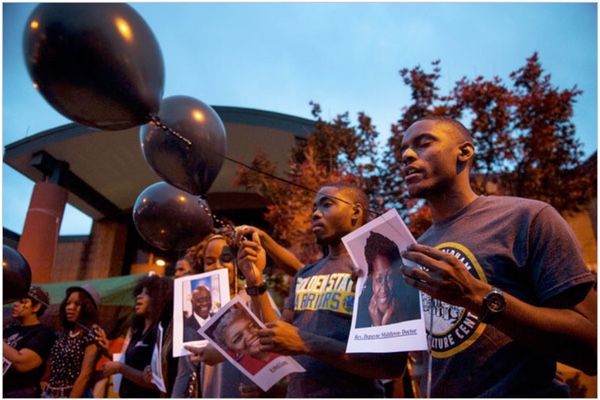 June 17, 2016 marks the one year anniversary of the Charleston massacre, one of the worst incidents of racial terrorism in American history. Like so many others, we were devastated by the news of the shooting, which took the lives of Cynthia Hurd, Susie Jackson, Ethel Lance, Depayne Middleton-Doctor, Clementa Pinckney, Tywanza Sanders, Daniel Simmons, Sharonda Coleman-Singleton and Myra Thompson. In the immediate aftermath of the shooting, media outlets portrayed the Charleston shooter as a lone, troubled young man with views far outside the bounds of mainstream white opinions about race, while others questioned if the shooting truly qualified as an act of terrorism. 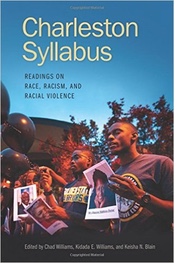 As educators committed to social justice, we understood that any public discourse surrounding the Charleston massacre must be grounded in an honest appraisal of the past. Indeed, the Charleston massacre represents a long tradition of white terrorist violence against African Americans stretching through much of the 19th and 20th centuries. Sadly, many are unaware of this history and others are grossly misinformed.

Recognizing how the Charleston shooting might serve as a learning opportunity, and accepting our unique responsibility as educators, we set out to create the #Charlestonsyllabus—a crowd-sourced public reading list of resources to help contextualize the shooting. Drawing inspiration from Marcia Chatelain’s #Fergusonsyllabus, Chad Williams called for the creation of a #Charlestonsyllabus on the evening of June 19, 2015. “Lots of ignorance running rampant,” Williams wrote on Twitter, “Folks need a #CharlestonSyllabus.”

Shortly thereafter, the three of us began tweeting book and article titles and links to primary sources related to the Charleston shooting and its much longer historical context. We were joined by dozens of other scholars, librarians, teachers, and students of history who suggested a range of sources including art and creative fiction. Within the span of an hour, #CharlestonSyllabus became a trending topic. With people tweeting in from across the nation and the world, it represented the very best of crowdsourcing and collaboration between educators and the larger public.

The magnitude of what we had initiated quickly set in. Keisha Blain worked to keep track of the flood of recommended readings and began to compile the reading list on the website of the African American Intellectual History Society (AAIHS). Librarians Cecily Walker, Ryan P. Randall, and Melissa Morrone volunteered to assist in organizing the titles and linking them to the WorldCat Library database. Elliot Brandow, a librarian then at Boston College, provided additional assistance by tagging all of the books and resources on Worldcat—making it easy for scholars and members of the general public to scroll through the selections and determine which ones were available at their local libraries. By mid-week, over 10,000 tweets had been posted under the hashtag and #CharlestonSyllabus had gone from one tweet to a major library resource.

To date, more than 200,000 people have accessed the #Charlestonsyllabus reading list. Several libraries across the country—including those at Boston College, Lipscomb University, Florida State University, Brandeis University, and Payne Theological Seminary— have featured#Charlestonsyllabus displays. Religious leaders across the nation are distributing the#Charlestonsyllabus reading list to encourage parishioners to learn more about the history of race relations. For example, Rev. Matthew Tingler, the pastor of Christ the King Lutheran Church in New Hampshire, not onlycreated a webpage on his website to encourage church members to consult the list but also collaborated with the church librarian to create a display of some of the books. Similarly, Rev. Lee Hull Moses, the pastor of First Christian Church (Disciples of Christ) in North Carolina,appealed to her members to use the #Charlestonsyllabus. “Don’t let the length of the list overwhelm you,” she cautioned, “Pick one and start there.”

These few examples underscore the myriad ways people have been using the #Charlestonsyllabus over the past year. Since its debut, we have received countless emails from individuals who have found in the reading list a wealth of resources to broach crucial topics like the histories of racial violence and the legacies of white supremacy. Katy Swalwell, a professor of Education at Iowa State University, praised the #Charlestonsyllabus for offering “a profoundly needed set of resources to help them begin to come to terms with the long legacy of racism in the United States and to offer perspectives [students] have never heard before about the Civil War, slavery, the Confederate flag, Jim Crow, and ongoing inequality and institutionalized racism.”

Many have found hope and inspiration from the #Charlestonsyllabus—at a moment of deep uncertainty about the future of race relations in this country. “[I am] deeply grieved by [the] state of the nation,” Jane Butler, a retired educator from Pennsylvania explained, “[but] hope lies with your efforts.”

Today the #CharlestonSyllabus is now a book. Building on the original reading list, Charleston Syllabus: Readings on Race, Racism, and Racial Violence includes some of the best works from the reading list so that educators and people invested in expanding their knowledge can obtain a better understanding of race, racism, and racial violence in U.S. and global history.

It is impossible to measure the full devastation of the Charleston massacre, which took place almost a year ago. The lives of Cynthia Hurd, Susie Jackson, Ethel Lance, Depayne MIddleton-Doctor, Clementa Pinckney, Tywanza Sanders, Daniel Simmons, Sharonda Coleman-Singleton and Myra Thompson can never be replaced. The scars on the collective psyches of black people in Charleston, throughout the United States, and indeed across the globe will remain. The history of American racial violence will now forever include the tragic events of June 17, 2015. It is our responsibility to confront this history, understand it, learn from it, and do our part, however small, to ensure that what took place in Charleston never happens again. We hope that the Charleston Syllabus provides knowledge, strength and inspiration in this cause.