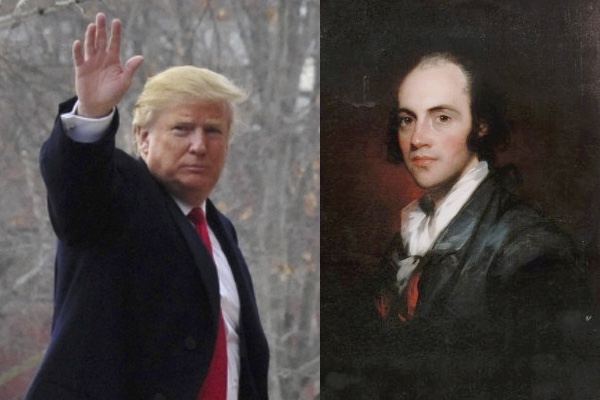 There is nothing unusual about being hated in politics by members of the opposing party. Both Barack Obama and Hillary Clinton certainly elicit such a reaction among Republicans. But Donald Trump has been criticized by members of his own party. One need look no further than a Google search to see the vitriol that Trump has unleashed among conservatives. The National Review website has an article entitled “Conservatives Against Trump,” that spans 62 pages of commentary from twenty-one different opinion makers, including some of the most well known voices in the conservative movement, including Bill Kristol, David Boaz, Edwin Meese III and Thomas Sowell.

One has to go back in history to find another politician who was despised by his peers, those that should be his supporters. This is what brought to mind Aaron Burr, who ran twice as Vice President with Thomas Jefferson, and later killed Alexander Hamilton in a duel. It was Burr’s action in the election of 1800 that made him despised by both sides. Due to a quirk in the Constitution, which was later fixed by the Twelfth Amendment, Jefferson and Burr ended up tied in the electoral college, throwing the election to the House of Representatives. The Federalists decided to support Burr in order to deny Jefferson the Presidency.

Burr was born in 1756 to one of the most influential families in the north. Both his father and grandfather had served as president of Princeton, but he never knew either of them, since both died, leaving him orphaned at a young age. He and his sister lived a nomadic existence, moving among different family members. At the age of sixteen he graduated with distinction from Princeton and then became involved in revolutionary politics. He served in the war as an aid-de-camp and endured the harsh winter at Valley Forge. In the aftermath of independence, he became a successful lawyer in New York, ran for office, and ultimately unseated Hamilton’s father-in-law as a senator. He was known to be a womanizer and “loved luxury, abhorred boredom, and was never good at managing money,” according to the historian Gordon Wood.

Burr’s two cardinal sins were that he was overly ambitious in an age when such behavior was unacceptable, and he lacked any known political principles or philosophy. He pursued politics for “fun and honor & profit,” he admitted later in life. Wood has written that “one searches in vain for a single thoughtful letter about political philosophy” in Burr’s papers. At the time, his opponents wrote that “he had no theory” and that he was “a mere matter of fact man.” His overriding ambition ultimately made enemies of both Hamilton and Jefferson, Wood also noted.

In one way Burr was ahead of his time. While today we take for granted that politicians actively seek office, this was frowned upon during the late eighteenth century. In the spring of 1799, Burr actively campaigned to elect Republicans to the New York state assembly. He and other members of the party “addressed meetings, distributed literature, and stationed themselves in force at the polls in all three days of the election,” according to two historians. Both the Alien and Sedition Acts and the increase in tax burdens triggered by the military buildup caused by the threat of war with France were major campaign issues. Due to these issues, the Republicans were able to elect a majority in the New York Assembly. It was that body that would choose the state’s twelve delegates to the Electoral College and prove crucial in their support for Jefferson. In 1796, Adams had won those delegates. In return for his work in New York, Burr was rewarded with the Vice President’s slot in the election of 1800 once again. It was a fateful decision.

With the election tied, rumors began to swirl that the Federalists were considering extra constitutional measures to deprive Jefferson of the Presidency. One involved waiting until Adams left office in March and then installing the President pro Tempore of the Senate or the Speaker of the House as President under a 1792 statue. Fellow Virginian James Monroe reported to Jefferson in early January the following: “It is said they [the Federalists] are resolved to prevent the designation by the H. of Reps. of the person to be president, and that they mean to commit the power by a legislative act to John Marshall, Samuel A. Otis or some other person till another election.” As events unfolded, it was becoming apparent that a peaceful transfer of power was at stake. “Talk was rife about militias arming, a possible civil war, and the breakup of the union,” James Rogers Sharp writes. “There were even reports that Jefferson would be assassinated.” While many of these rumors were overblown, the participants at the time believed them.

The Federalists met in mid-January to hatch their scheme to support Burr. Theodore Sedgwick, the Federalist Senator from Massachusetts, framed their view best when he wrote to Hamilton that while Burr’s “ambition was of the worst kind,” he was a man that lacked any political philosophy or “pernicious theories.” Sedgwick thought that Burr could be controlled since he “must depend on good men for his support & that support he cannot receive but by a conformity to their views.” Hamilton disagreed vehemently. Although he and Jefferson had been political enemies since their days serving together in Washington’s cabinet in the 1790’s, he decided to support Jefferson as the lesser of two evils.

Burr was the great anomaly of the election of 1800-1801. It was clear that Jefferson was at the top of the ticket, and that Burr should have stepped aside for him, but instead he left the door open for Federalist members of Congress to back him. While the Republicans had swept to victory in the legislative elections, it was the lame duck House still under Federalist control that would meet in February to cast ballots to break the tie. Initially, Burr indicated he would “utterly disclaim all ambition” for the presidency, but this was in mid-December before it became clear that there was a tie. While Burr “did nothing to actively draw the presidency away from Jefferson,” according to Joanne Freemen, “he never promised to decline the office if it were offered.” Ultimately Burr would find himself frozen in place and alienate both sides before Jefferson was finally elected in 1801.

One can see clear similarities between Burr and Trump in terms of their ambition. Burr was not trusted because of his overwhelming ambition, and Donald Trump seems to fit the same pattern. In addition, Trump seems to have no clear political ideology, and has been excoriated by conservatives for his lack of adherence to conservative ideals. In the National Review, one conservative analyst states that “Trump’s liberal positions aren’t in the distant past--- he has openly promoted them on the campaign trail.” Another says that Trump’s ideas do not fit those “of a small government conservative who understands markets.” Trump’s apostasy extends to his opposition to free trade, support for universal health care, Planned Parenthood, and tax increases. And yet it goes beyond this, with most thoughtful people questioning whether Trump has the temperament, the right combination of mental and emotional traits, to be President.

Aaron Burr’s fate was sealed by the election of 1800-1801, and he is still considered a reviled figure in history. In 1807 Burr was put on trial for treason after he attempted to convince certain western states to secede from the union. He was acquitted when there was insufficient evidence to gain a conviction. Trump now stands as the presumptive Republican candidate, and his fate has yet to be determined.