FROM OUR ARCHIVES: Dinesh D’Souza Claims in a New Film that the Democratic Party Was Pro-Slavery.

On March 5, 2016, conservative pundit Dinesh D’Souza announced via trailer on his webpage the debut of a would-be expose on the hidden history of American Democrats: Hillary’s America: The Secret History of the Democratic Party.

The film is clearly partisan propaganda, but the trailer reveals that D’Souza believes the Democratic Party of the nineteenth century was aggressively pro-slavery, then, after the legal demise of chattel bondage, militantly white supremacist.

The sad truth is D’Souza is correct. From its origins, the coalition that became the Democratic Party was founded on the core principles of black slavery, white supremacy, and the aggressive expansion of plantation agriculture. 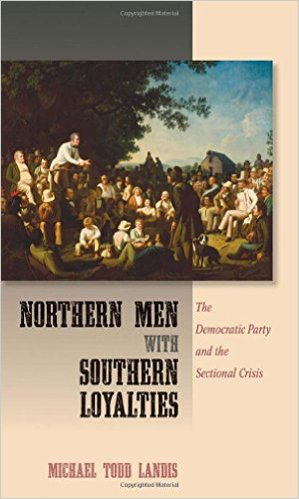 The original partisan organization (calling themselves “Democratic-Republicans”) was forged by powerful Virginia enslaver and conservative Thomas Jefferson to challenge the commerce-oriented nationalist Federalists in the 1790s. Jeffersonians dominated in the agricultural, conservative slave states, while Federalists were ascendant in the diversified, mostly anti-slavery northeast. In the first contested presidential election (1796), Jefferson won every slave state plus Pennsylvania, which was still largely rural. Despite the 3/5 clause advantage (boosting slave state representation in both the House of Representatives and the Electoral College), Jefferson still lost to Federalist Vice President John Adams. In 1800, however, Federalists were fractured, and Jefferson won the White House. Twelve extra electors from the 3/5 clause plus twelve electors delivered from New York by Aaron Burr was enough to overcome northeastern population density.

Once in power, Jeffersonian Democratic-Republicans pursued an aggressive pro-slavery agenda. The “Virginia Dynasty” of enslaver presidents Jefferson, James Madison, and James Monroe sought to expand the nation’s borders, spread plantation agriculture, destroy the Federalists, and increase Southern political power. Districts were gerrymandered to ensure Jeffersonian electoral victories; a trade embargo was declared in 1808 that crippled New England (Federalist) commerce; and a war with Britain was launched in 1812 that also led to widespread financial suffering for northeastern Federalists. In the wake of the War of 1812, Jeffersonians co-opted several key Federalist policies (such as the Bank of the United States), and President James Monroe appointed former Federalists, such as John Quincy Adams, to key positions in his administration, leaving the national Federalist Party largely defunct.

With the Federalist Party nearly dead outside of New England, Southern enslavers could rule virtually unchallenged. In March 1818, a US army under the command of Tennessee enslaver Andrew Jackson invaded Spanish Florida to destroy the Seminole Indians, seize the peninsula, and stem the flow of runaway slaves from Georgia and South Carolina. In 1820-21, Jeffersonians achieved a striking victory with the spread of slavery west of the Mississippi River (the new slave state of Missouri) and the guarantee of the spread of slavery into formerly free territory (the so-called “Missouri Compromise Line”). Simultaneously, white Southerners sought the extermination of Indians in Georgia, Alabama, and Mississippi to make way for cotton plantations and slavery. To achieve that all-important goal, Jeffersonians rallied behind the conqueror of Florida, Andrew Jackson. General Jackson was denied the presidency in 1824, but saw success in 1828. Key to Jackson’s victory was Martin Van Buren of New York. Like Jefferson in 1800, Jackson could not win the presidency without at least one populous Northern state. Burr delivered in 1800, and Van Buren repeated the feat in 1828. But unlike Jefferson’s one-time deal with Burr, Van Buren forged a powerful conservative political organization that dominated the nation for the next thirty years.

Van Buren’s alliance of Southern enslavers, frontier Indian killers, and Northern conservatives was called the Democratic Party. The spread of slavery and the subsequent increase in Southern political power were the central tenets of the new coalition. To win Northern votes for a Southern party, Van Buren fashioned an effective message of white racial solidarity and inherent black inferiority. Moreover, he utilized the power of patronage to reward partisan loyalists and discipline partisan publications.

In the 1828 campaign, Democrats claimed to represent “the people” against the corrupt, tyrannical, aristocratic administration of president John Quincy Adams. Adams’s liberal agenda of international improvements, technological innovations, public education, and cooperation with new Latin American nations was anathema to Southern conservatives, who despised America’s dark-skinned neighbors and who feared that a dynamic, activist federal government threatened slavery. “If Congress can make canals,” declared Nathanial Macon of North Carolina, “they can with more propriety emancipate.”1

With Jacksonian Democrats in control after 1828, federal powers were dramatically expanded in the name of slavery and Southern power. Tens of thousands of Indians were either murdered or relocated as part of “Indian Removal”; anti-slavery mail was burned by postmasters; Democratic mobs attacked anti-slavery meetings, rallies, and newspapers; abolitionist leaders were assaulted and murdered; international treaties were breached by the imprisonment of free black sailors in Southern ports; First Amendment rights were violated with the congressional “Gag Rule” that forbade anti-slavery petitions from being received and recorded; illegal filibustering expeditions aimed at spreading slavery into Latin America were launched; Mexico was invaded in 1846 to secure Texas as a massive slave state and conquer as much of Mexico as possible in order to carve out new slave states; a Fugitive Slave Act was passed in 1850 that forced Northerners to participate in the kidnapping and enslavement of their free black neighbors; the Kansas-Nebraska Act of 1854 permitted the spread of slavery into the remnants of the Louisiana Purchase, which had been previously designated free territory; white Southerners began physically assaulting anti-slavery congressmen; in 1857, the Supreme Court denied black humanity and ruled that Congress had no authority to stop the spread of slavery; and in 1858, Congress attempted to force slavery on the unwilling, anti-slavery settlers of the Kansas Territory.

These most heinous policies and events of the antebellum era were all at the hands of the Democratic Party. By the 1850s, the anti-slavery movement had swept the free states and Northerners fled the Democracy (as it was called) in droves. Thus, by 1860, the Democratic Party was effectively shorn of any Northern wing and stood entirely for slavery and Southern political supremacy. It is no wonder that Democratic Senator Jefferson Davis became the first (and only) president of the Confederate States of America. Who but a Democrat could be so devoted to slavery?

During the Civil War, when eleven slave states attempted to forge a separate slave-owning paradise, Democrats continued to contest regular elections in the United States. Though they were deeply divided over the conduct of the war (“War Democrats” sought to put down the rebellion, while “Peace Democrats” aimed to end the war immediately), Democrats remained united on white supremacy, the righteousness of slavery, and opposition to the Republicans. “This is a Government of white men, made by white men for white men, to be administered, protected, defended, and maintained by white men,” declared Chilton White of Ohio. Democratic newspapers, pamphlets, and orators labeled the party of Lincoln “Black Republicans,” claimed Lincoln himself was secretly a black man (“Abraham Africanus the First”), warned against “miscegenation” (a word coined by a Democratic editor), and concocted fantastic tales of “filthy black niggers” raping white women and children.

Democrats even resorted to illegality and domestic terrorism to thwart Republicans: in September 1864, Peace Democrats launched an abortive plot to capture the USS Michigan on Lake Erie to free rebel prisoners held on Johnson’s Island; in Indiana, US Marshals uncovered hidden caches of weapons; in Missouri, Democrats cooperated with rebel guerillas to wreak havoc on US supply lines and terrorize Unionists; and plots to stop elections in Chicago and New York were foiled by federal agents. Throughout the war, Democrats vigorously opposed emancipation, black troops, the passage of the Thirteenth Amendment to the Constitution, and the formation of the federal Freedmen’s Bureau, which was designed by Republicans to aid slaves in their transition to freedom.

In the post-war years, as rebel states began the torturous process of rejoining the Union, the national Democratic Party opposed any punishment of rebel leaders, fought against black rights, and strenuously objected to any federal interference in Southern race relations. By 1868, Democrats had mobilized armed opposition to Reconstruction in the form of paramilitary white supremacy terrorist groups, such as the Ku Klux Klan. White supremacy murder and violence throughout the 1860s and 1870s led to the eventual demise of Reconstruction, and the victory of Democrats at the polls in 1874 and 1876. The overthrow of pro-Reconstruction Republican state governments in the South and the return of Democrats to power (called “Redemption” in Southern lore) meant an era of “second slavery” for black Americans.2

In the late nineteenth and early twentieth centuries, Republicans remained dominant in the North, but Democrats ruled the “solid South” with an iron fist. “Jim Crow” segregation was the law of the land, and black Americans found themselves economically enslaved by sharecropping and physically enslaved by the convict labor system. When Southern Democrat Woodrow Wilson entered the White House in 1913, he promptly segregated the federal government and promoted a version of American history where the “Old South” was a romantic wonderland, the KKK were beloved heroes, and emancipation and Reconstruction were terrible, monstrous errors. (See “The Birth of a Nation,” the film by D.W. Griffith.)

The Democratic Party did not remain the party of slavery and white supremacy, however. In 1896, Democrats allied with the Populists, who had experimented with interracial cooperation; in the 1930s, Democratic President Franklin Roosevelt and First Lady Eleanor made civil rights advances for black Americans a hallmark of their administration; and in 1948, Democratic President Harry Truman desegregated the federal government and made civil rights legislation a significant part of his “Fair Deal.” White Southerners, who had been the base of the Democracy for over 100 years, bolted the party in 1948, formed their own “Dixiecrats” organization to defend segregation, then made their way into Republican ranks. By the 1960s, Democrats had become the party of civil rights and cultural diversity, a remarkable transformation in a relatively short period of time.