Tony Platt is a Distinguished Affiliated Scholar at the Center for the Study of Law and Society, University of California, Berkeley. He is the author of Bloodlines: Recovering Hitler’s Nuremberg Laws, From Patton’s Trophy to Public Memorial (Paradigm Publishers, 2006). He blogs on history and memory. 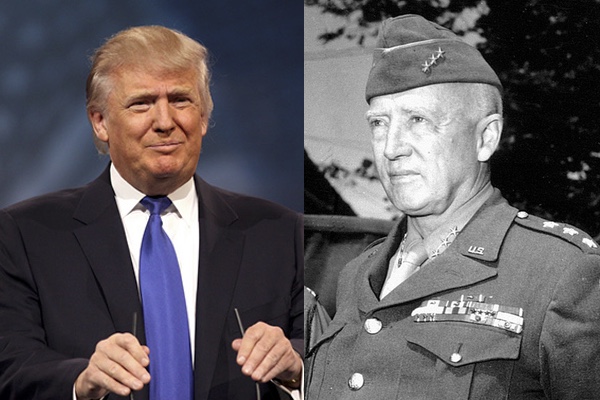 “Old Blood and Guts. Our blood, his guts.”

There’s been quite a bit of speculation about Donald Trump’s historical precursors, from Emperor Nero to Führer Hitler and Governor George Wallace. Though he shares some of Nero’s populism and quirky personality traits, Hitler’s knack for branding, and Wallace’s pugnacious racism, Trump is a man of this media-driven moment. He has much in common with Silvio Berlusconi, the former Prime Minister of Italy, who like Trump, made a fortune before entering politics, knows how to work the media, and represents the rise of the anti-politics politician. 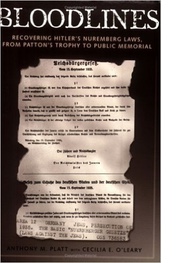 As for parallels from the past, Trump reminds me in several ways of George Patton (1885-1945), the American general known by military men as Old Blood and Guts, whose larger-than-life persona has been aggrandized in an Oscar-winning movie, museums, children’s books, motivational manuals, and cyberspace. He was “one of America’s greatest soldiers, a genuine hero,” according to a HBO documentary. A Time-Life book compared him to Babe Ruth coming up to the plate: “Here’s a big guy who’s going to kick hell out of something.”

Like Trump, the general was born with a gold spoon in his mouth. George inherited wealth from his father who made money in Southern California’s land deals, vineyards, and oil investments. When Patton married Beatrice Banning Ayer in 1910, his considerably wealthier father-in-law put him on the family payroll and subsidized a coddled military career, complete with traveling servants, a stable of horses, and all the trappings of minor aristocracy. He grew up with Mexican servants at home, Black maids at the Virginia Military Institute, and a personal Chinese cook in the army.

Like Trump, Patton’s rightwing politics was based on a US-centric nationalism and an unabashed, racial worldview. He had a taste for authoritarian regimes that promoted anti-democratic policies. “To Hell with the people,” he confided in his father. He dismissed “sexless” pacifists as having the “back bone of a jelly fish.” In his personal copy of Mein Kampf, he underlined Hitler’s assertion that “a Majority can never be a substitute for the Man.”

Patton was an equal opportunity hater. As a staunch supporter of the Confederacy, one of his favorite films was “Birth of a Nation.” During the war he remained convinced that “a colored soldier cannot think fast enough to fight in armor.” To Patton, Arabs were “a mixture of all the bad races on earth.” At the end of the war, he regarded Jews as a “sub-human species” and Germans as “the only decent people left in Europe.”

Like Trump, Patton had a particular animus for Mexico. In the 1910s, he advocated imperialist annexation. “If we take the country,” he wrote his father, “we could settle it and these people would be happier and better off.” When he was assigned to the Eighth Cavalry Regiment on the Texas border, he celebrated killing two Mexican soldiers by cutting notches in the grip of his revolver and strapping the dead men to the hoods of car like deer. “I feel about it just as I did when I got my first fish,” he wrote his wife.

Like Trump, Patton was known for his public bravura and crude bluster. “Patton didn’t give a damn about keeping anything secret,” the Third Army’s historian, Hugh Cole, told me. His flamboyance made him, as Life magazine noted, “the pet of all the newspapermen.” Patton’s boss, Dwight Eisenhower, considered him a brilliant military strategist, but an impulsive narcissist who could not resist making off-the-cuff comments to the press corps. When he expressed his anti-Soviet and anti-Semitic views in public in 1945, Eisenhower berated his indiscretions and transferred him to a desk job. Patton blamed the “non-Aryan press” for plotting his demise.

Unlike Trump, Patton didn’t enter politics. But it was on his mind in 1945 when he died in a car accident. If he had lived, it’s likely that he would have followed the lead of many former high-ranking officers who joined corporate boards, became cabinet members and ambassadors, and repositioned themselves as Cold War warriors. His rightwing supporters, including the racist Mississippi Congressman John Rankin, floated his name as Secretary of War and pitched the idea of a run for Congress.

Patton believed in reincarnation and thought that he might have been Hannibal and an English knight in previous lives. Who knows, maybe he’s returned, ready to spill our blood with his guts.