Did Racism Taint Woodrow Wilson as a Historian? 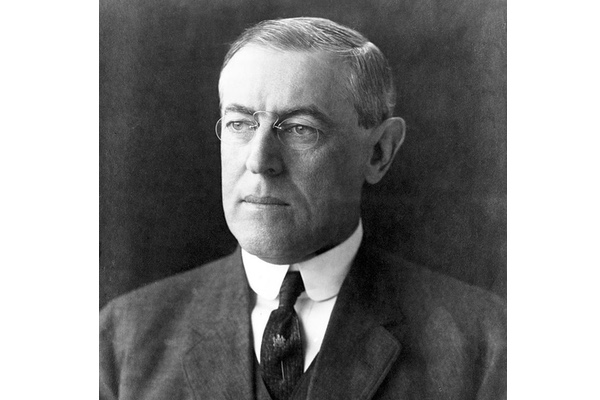 The greater part of Woodrow Wilson’s career was spent in the academic world, as a professor and later as president of Princeton. And, he was the only American president to hold a Ph.D. (in political science).  In 1902, he published a handsomely illustrated, five-volume History of the American People, [hereafter HOAP] which was a surprising commercial success that made his name familiar outside academia. Indeed, his 2013 biographer, A. Scott Berg, declares that the books “made him one of the best known historians in the country” and “the Presidency’s most accomplished student of American history and politics.” [Theodore Roosevelt doth protest!]

Wilson himself was far more modest about this work. “I am only a writer of history … a fellow who merely tried to tell the story, and is not infallible on dates. … I wrote the history of the United States in order to learn it.” Later, In the White House, he candidly admitted to family and close aides, “I have never been proud of that History. I wrote it only to teach myself something about our country.” It is amusing to speculate about how Wilson would have reacted if he had known that one of the most renowned scholars he personally recruited for Princeton, later dismissed the HOAP as “a gilt-edged pot boiler.”

Regardless of these disagreements about the overall historical merits of HOAP, it turns out that Wilson’s analysis of slavery and Reconstruction provides striking insights into the racial mindset he brought to the White House. Professor Wilson’s interpretation of American racial history was entirely formulaic and unoriginal—in fact, little more than a summary of the dogma of several generations of Southern apologists. He took for granted the reigning assumption that only “the African could stand” working  “in the wet southern rice fields, upon the broad acres of tobacco, amidst the sugar cane, and out in the hot furrows of grain.” “The indolent slaves,” he declares, “did not work as free laborers would have worked, and could not be made to.” But, for the slave owners: “The care of the slaves, their maintenance like a huge family of shiftless children, remained a duty and a burden which the master could not escape, good season or bad, profit or no profit.” He concludes that principle and self-interest motivated most masters to be indulgent, humane, and committed to the well-being of their charges, especially house slaves who “were treated with affection and indulgence.”

The Civil War, he insists, did not significantly alter the loyalty of the slave population: “How quiet, how unexcited, how faithful and steady at their accustomed tasks, how devoted in the service of their masters the great mass of the Negro people had remained amidst the very storm and upheaval of war.” Inevitably, as the war produced rumors of emancipation:

the negroes ignorantly … dreamed that the blue-coated armies which stormed slowly southward were bringing them, not freedom only, but largess of fortune as well; and now their dream seemed fulfilled. The government would find land for them, would feed them and give them clothes. It would find work for them, but it did not seem to matter whether work was found or not: they would be taken care of. They had the easy faith, the simplicity, the idle hopes, the inexperience of children. Their masterless, homeless freedom made them the more pitiable, the more dependent, because under slavery they had been shielded, [and] had never learned independence or the rough buffets of freedom.

Of course, worse was yet to come when defeat in the Civil War was followed by military Reconstruction. “It was a menace to society itself,” Wilson insists, “that the negroes should thus of a sudden be set free and left without tutelage or restraint. Some stayed very quietly by their old masters and gave no trouble; but most yielded, as was to have been expected, to the novel impulse and excitement of freedom. … The country filled with vagrants, looking for pleasure and gratuitous fortune … and the vagrants turned thieves or importunate beggars.” The ignorant and credulous freedmen “were easily taught to hate the men who had once held them in bondage.”

Inevitably, white southerners rose to defend their accustomed way of life: “There were men … who could not sit still and suffer what was now put upon them. It was folly for them to give rein to their impulses; it was impossible for them to do nothing.” The night-riding comrades of the Ku Klux Klan and the Knights of the White Camelia made it their goal “to silence or drive from the country the principal mischief-makers of the reconstruction regime, whether white or black. … It threw the Negroes into a very ecstasy of panic to see these sheeted ‘Ku Klux’ move near them in the shrouded night; and their comic fear stimulated the lads who excited it to many an extravagant prank [!]. … [But] the Negroes were generally easy enough to deal with: a thorough fright usually disposed them to … do anything their ghostly visitors demanded.”

Over the last half-century, this kind of “history” has been exposed as racist rubbish. A vast literature, often based on slave sources, has documented how black Americans survived, coped, and resisted during more than two centuries of slavery and an additional century of violence, lynching, racism, and de-facto and legal segregation. But, we would be guilty of presentism, pure and simple, if we arraigned Wilson for not interpreting the past as we do. However, that does not mean that we should simply excuse his blatantly biased writing.

In fact, it was possible during Wilson’s lifetime for a historian who shared his racial assumptions to nonetheless dig further and deeper into the evidence about slavery and Reconstruction. Ulrich B. Phillips, born in Georgia, spent the bulk of his academic career at the Universities of Wisconsin and Michigan. Phillips shared Wilson’s racial outlook; his writing about black Americans is filled with adjectives like “inert,” “backward,” “sluggish,” “inept,” “lazy,” “passive,” and “dependent.” He believed that negroes were inherently limited “by the fact of their being negroes … [who] were by racial quality submissive rather than defiant, light-hearted instead of gloomy, amiable and ingratiating instead of sullen, and whose very defects invited paternalism rather than repression.”

Nonetheless, Phillips’s careful investigation of plantation records led him to conclude that “the lives of the whites and the blacks were partly segregated partly intertwined. … [but] the slaves themselves were by no means devoid of influence [and] ‘a negro understands a white man better than the white man understands the negro.’ ” Phillips found countless examples of slave initiative: theft of food and other necessities, sabotage, desertion, neglect of tools, protection of loved ones, etc. He also recognized the decisive role of slave preachers and foremen in mitigating harsh conditions. Phillips even found cases in which slaves assumed virtually complete management responsibilities amounting to self-government: “The slaves were encouraged to earn money for themselves every way they might, and the discipline of the plantations was vested in courts composed wholly of slaves, imposing penalties to be inflicted by slave constables.” On occasion, he contended, grievances led slaves, much like free wage-earning laborers, to strike as a group. “Their power of renewing the pressure could not be ignored. A happy ending for all concerned might be reached by mutual concessions and pledges. … The slaves themselves would not permit indifference [italics added] even if the masters were so disposed.” The evidence revealed as well that, far from being the helpless and dependent post-emancipation wanderers described by Wilson, the freedmen struggled to obtain land, establish schools and reunite grandparents, parents, and children. Thousands of former slave couples “flocked to get their already socially recognized marriages legally sanctioned and approved.” Clearly, Wilson’s professed modesty about the HOAP was fully justified.

In 1915, in a well-known episode, President Wilson agreed to screen D.W. Griffith’s racially-charged Birth of a Nation (based on The Clansman, by Wilson’s former college associate, Thomas R. Dixon) in the White House for his family and cabinet. After the film, he allegedly said, “It is like writing history with lightning. And my only regret is that it is all so terribly true.” Wilson’s recent biographers, John Milton Cooper, Jr, and A. Scott Berg, have argued convincingly that there is no reliable evidence that he ever made that remark. Cooper even concludes that the controversy over the film made Wilson’s “racial views look worse than they were.” But, Wilson’s writings on slavery and Reconstruction, used in the film’s written subtitles and cited above, leave no doubt that regardless of whether he actually made that remark, his racial views were entirely in sync with the historical message of the film.

President Wilson would learn, to his apparent surprise and irritation, that black Americans had neither been content to be slaves, or after 1865, to remain second-class citizens.