Rob Brotherton is an academic psychologist and the author of Suspicious Minds: Why We Believe Conspiracy Theories, from which this adapted article isexcerpted. 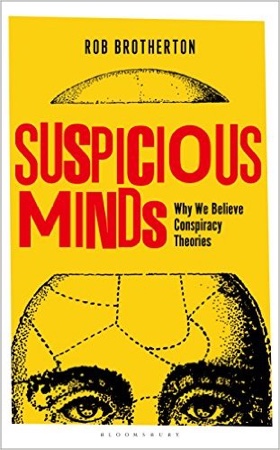 Picture a conspiracy theorist. The image that comes to mind is probably of a deluded kook lurking on the fringes of respectable society with a penchant for obscure Internet forums, talk radio, and tinfoil. Even in certain scholarly circles, the stereotype is pervasive—but it doesn’t stand up to scrutiny.

One man did more than anyone else to legitimize the view that conspiracy theories are the purview of the paranoid fringe. Richard Hofstadter was a professor of American history at Columbia University from the 1940s until his death in 1970. He had the classic look of a mid-twentieth-century intellectual, with short, neatly combed hair, a clip-on bow tie, and scholarly horn-rimmed glasses. One of Hofstadter’s students referred to him as “almost nondescript.” But his unassuming appearance belied a passion for unusual ideas. Hofstadter won two Pulitzer prizes for his books on populism and anti-intellectualism in American culture, as well as tackling subjects like social Darwinism and status anxiety. As a fellow historian put it, Hofstadter devoted much of his career to understanding “the odd, the warped, the zanies, and the crazies of American life.” It is understandable, then, that he would eventually turn his attention to conspiracy theories.

In 1964, Hofstadter published an essay in Harper’s Magazine summarizing the role of conspiracy theories in American history and speculating about the possible causes of conspiracy thinking. In doing so, he became one of the first social scientists to contemplate conspiracy theories, transforming them into a topic fit for respectable academic discussion.

Hofstadter gave his essay the deliberately provocative title “The Paranoid Style in American Politics.” In case that was too subtle, he happily explained that when he said “paranoid style,” he meant it as an insult. According to Hofstadter, the paranoid style is a distorted way of viewing the world, characterized by delusional thinking, excessive suspicion, shoddy scholarship, exaggeration of the facts, and unjustified leaps of imagination.

The paranoid style, Hofstadter argued, has polluted the thinking of minority political movements throughout American history, and around the world. “A mentality disposed to see the world in this way may be a persistent psychic phenomenon,” Hofstadter speculates. “While it comes in waves of different intensity, it appears to be all but ineradicable.” Thankfully, however, he concluded that it usually afflicts only a “modest minority of the population” in possession of “uncommonly angry minds.” In other words, the paranoid style is a fringe affair.

Almost every academic analysis of conspiracism that has come since owes an intellectual debt to Hofstadter’s pioneering essay. Beyond academia, his essay contributed to the stereotype of the paranoid, fringe-dwelling conspiracy theorist, and it is still often quoted approvingly by pundits.

Which is a pity, because Hofstadter’s analysis was as flawed as it was insightful.

Jesse Walker found so many examples woven so deeply into the fabric of America that he titled his book on the subject United States of Paranoia. In it, Walker pointedly subverted the title of Hofstadter’s famous essay by titling a chapter “The Paranoid Style Is American Politics.” The establishment, Walker points out, “has conspiracy theories of its own.” From the Declaration of Independence (which described “a design” to establish “absolute Tyranny over these States”) to President Obama (whose 2012 reelection campaign accused “secretive oil billionaires” of distorting his record and attempting to buy the election)—not to mention the many conspiracist musings of current Republican presidential frontrunner Donald Trump—conspiracy theories have always had a place at the heart of American politics.

It’s worth noting that over time it seems Hofstadter came to suspect that conspiracism might be a bigger phenomenon than he had initially imagined. While an early version of his essay stated that the paranoid style affects only a “modest” minority of the population, he later upgraded his estimate to a “considerable” minority. But Hofstadter didn’t have numbers to back up his claims, and even this more generous estimate still falls short of the true scope of conspiracism.

The last few years have furnished us with dozens of opinion polls, and, far from being the purview only of a small handful of alienated paranoiacs, huge numbers of people believe conspiracy theories. When it comes to the 9/11 attacks, the death of Princess Diana, the moon landing, the impending New World Order, the fluoride in our water, the safety of vaccines, or the existence of aliens, for instance, somewhere between 10 and 30 percent of people believe conspiratorial accounts. And when it comes to who killed JFK, conspiracy theorists are the majority; according to some polls over the years, as few as one or two people out of ten have accepted that Lee Harvey Oswald acted alone.

These levels of belief stretch any definition of “fringe”’ well beyond breaking point. But even these substantial figures underestimate the true prevalence of conspiracy thinking. All they show is that the people who took part in the research believed at least one of the few conspiracy theories the polls specifically asked about. The 2014 medical conspiracy survey contained six theories, and the 2013 political survey asked about just four. This is an unavoidable limitation. Asking people about every conspiracy theory under the sun would be more informative, but not many people would be willing to sit through the interrogation. If we could somehow carry out such an ambitious study, I suspect we would find that pretty much everyone believes one conspiracy theory or another.