If You Look, You’ll Find Fascinating Stories About Women in History

Theresa Kaminski, Professor of History at the University of Wisconsin-Stevens Point, is the author of Angels of the Underground: The American Women who Resisted the Japanese in the Philippines in World War II (2015). 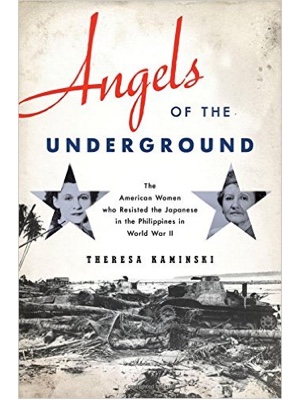 Women’s history has been a vibrant field of study in academia for at least a couple of generations, and its untapped subject matter remains vast. As a historian of American women, I’ve tapped into a portion of it. Rather than searching for women in unexpected places, as though they’ve been hiding from historians, I’ve proceeded from the assumption women have always been present wherever men were. I looked in the expected places, but in doing so observed through a different lens and asked new questions.

Take, for example, my recent area of interest: the Pacific theater in World War II.

U.S. entry into the war began with Japan’s surprise attack on Pearl Harbor on December 7, 1941. The strike was quickly followed by a series of bombings in the Philippine Islands, a colonial possession of the United States since the end of the Spanish-American War. By January 1942, Japanese soldiers occupied the capital city of Manila. General Douglas MacArthur and his men fell back to the Bataan peninsula and the fortified island of Corregidor, hoping to hold out until reinforcements arrived. None did. In March, MacArthur slipped off to the safety of Australia, Bataan fell in April, and Corregidor in May. Thousands of American military personnel were swallowed up into POW camps. Silence seemed to fall over the Philippines until October 1944 when MacArthur made his splashy return at Leyte Gulf. The subsequent showdown in the islands between American and Japanese forces culminated in the bloodbath known as the Battle of Manila, which took place from February to March of 1945.

Given the basic description of these events, it’s not surprising that the many books written about them, both scholarly and popular, focus on men: the attacks on Pearl Harbor and the Philippines, General Douglas MacArthur, the battles of Bataan and Corregidor, the rescue of American POWs from Cabanatuan, and the near destruction of Manila. The most popular of these books written for a general audience have featured prisoners of war: Hampton Sides's Ghost Soldiers and Laura Hillenbrand's Unbroken.

Both are big, dramatic stories, utterly compelling to read. Yet as with nearly all historical events, shifting focus and asking different questions about the political and military aspects of POW experiences can reveal different yet equally riveting narratives. For example, in writing about the exploits of the U.S. Army 6th Ranger Battalion and its stunning success in rescuing the military prisoners in Cabanatuan, Hampton Sides acknowledged Manilans who risked their lives to help these men survive the POW camp long enough to be liberated. For the purposes of Sides’s story, though, the people who provided assistance, including the American women Margaret (Peggy) Utinsky and Claire Phillips, made brief appearances as supporting characters.

In my latest book, I approached Peggy Utinsky and Claire Phillips as major characters, adding a new dimension to this episode of World War II history. Focusing on women also allowed me to ask different questions. What was it like to be an American civilian living in the Philippines between 1942 and 1945 when the Japanese occupied the islands? What did it take to survive an enemy occupation? Answering both questions required careful attention to the ways in which gender operates across time and place.

Peggy Utinsky came to Manila in the 1920s, an overworked nurse, looking for a bit of fun and relaxation before returning stateside. Instead, she fell in love with the islands and with Jack Utinsky, an American civil engineer working on Corregidor, so she stayed on. Claire Phillips arrived in Manila in the late 1930s, seeking fame as a singer. That eluded her, as did a happy marriage, but she stayed, too, content with her nightclub career and her circle of friends. In 1941, Claire fell in love again, this time with an American serviceman several years her junior.

Though this had all the makings of a tropical romance, the Japanese attack in December 1941 altered the course of that narrative. Neither woman was the type to sit home and wait for something to happen. When Jack Utinsky, a veteran of the First World War, joined up again to fight, Peggy took a nursing job in a Manila hospital and volunteered at a soldiers’ canteen. After the Japanese occupation of Manila and the American surrenders at Bataan and Corregidor, Peggy forged new identity papers so she could join the Philippine Red Cross on an expedition to Bataan. She provided medical services to the locals there while she looked for Jack. When Peggy realized he’d been taken prisoner, she returned to Manila to begin figuring out how she could make contact with him and smuggle supplies into the POW camp.

In December 1941, Claire followed her fiancé, John (Phil) Phillips, to Bataan, providing meal and laundry services to his fellow soldiers as they prepared for a full-on engagement with the enemy. After the chaos of that battle and the subsequent surrender, Claire met an American soldier, John Boone, who’d been separated from his unit, evaded capture, and decided to set up a guerrilla force. He asked Claire to consider going back to Manila to set up a lifeline for his men. She declined, only because she wanted to find Phil. When she learned he’d been taken prisoner, she settled back in Manila, arranged for false identity papers, and opened a nightclub for Japanese patrons. From there, Claire gathered and disseminated information and supplies to Boone’s guerrillas, and she helped Peggy Utinsky’s “Miss U” network smuggle food and medicine into the POW camps.

This was dangerous work, but Peggy and Claire didn’t shy away from it. They knew that the Japanese occupation authorities, ruthless in cracking down on spying and smuggling, didn’t exempt women from arrest and punishment. The Japanese secret police, the Kempeitai, caught Peggy first, then Claire. What the two women endured while imprisoned rivaled the experiences of the POWs they were trying to help. Yet it was also distinctly different because they were women.

Surviving an enemy occupation required ingenuity, courage, and a bit of luck. Knowing how American women in the Philippines managed it enriches our knowledge of the Pacific theater during World War II, revealing, through a new set of questions, a fresh, complex, textured story.