Dr. Lawrence Wittner is Professor of History emeritus at SUNY/Albany.  His latest book is a satirical novel about university corporatization and rebellion, What’s Going On at UAardvark? 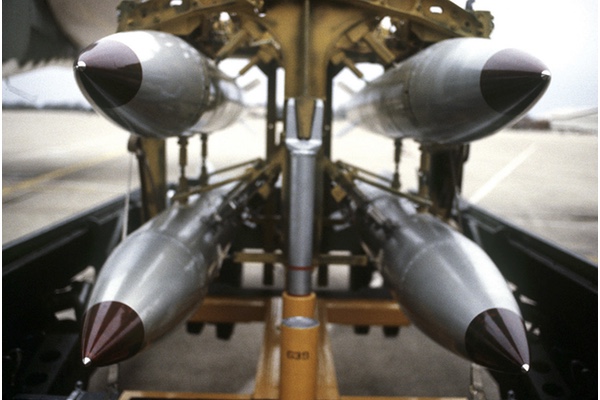 A fight now underway over newly-designed U.S. nuclear weapons highlights how far the Obama administration has strayed from its commitment to build a nuclear-free world.

The fight, as a recent New York Times article indicates, concerns a variety of nuclear weapons that the U.S. military is currently in the process of developing or, as the administration likes to say, “modernizing.” Last year, the Pentagon flight-tested a mock version of the most advanced among them, the B61 Model 12. This redesigned nuclear weapon is the country’s first precision-guided atomic bomb, with a computer brain and maneuverable fins that enable it to more accurately target sites for destruction. It also has a “dial-a-yield” feature that allows its handlers to adjust the level of its explosive power.

Supporters of this revamped weapon of mass destruction argue that, by ensuring greater precision in bombing “enemy” targets, reducing the yield of a nuclear blast, and making a nuclear attack more “thinkable,” the B61 Model 12 is actually a more humanitarian and credible weapon than older, bigger versions. Arguing that this device would reduce risks for civilians near foreign military targets, James Miller, who developed the nuclear weapons modernization plan while undersecretary of defense, stated in a recent interview that “minimizing civilian casualties if deterrence fails is both a more credible and a more ethical approach.”

Other specialists were far more critical. The Federation of Atomic Scientists pointed out that the high accuracy of the weapon and its lower settings for destructiveness might tempt military commanders to call for its use in a future conflict.

General James E. Cartright, a former head of the U.S. Strategic Command and a retired vice chair of the Joint Chiefs of Staff, conceded that possessing a smaller nuclear device did make its employment “more thinkable.” But he supported developing the weapon because of its presumed ability to enhance nuclear deterrence. Using a gun as a metaphor, he stated: “It makes the trigger easier to pull but makes the need to pull the trigger less likely.”

Another weapon undergoing U.S. government “modernization” is the cruise missile. Designed for launching by U.S. bombers, the weapon—charged William Perry, a former secretary of defense—raised the possibilities of a “limited nuclear war.” Furthermore, because cruise missiles can be produced in nuclear and non-nuclear versions, an enemy under attack, uncertain which was being used, might choose to retaliate with nuclear weapons.

Overall, the Obama administration’s nuclear “modernization” program—including not only redesigned nuclear weapons, but new nuclear bombers, submarines, land-based missiles, weapons labs, and production plants—is estimated to cost as much as $1 trillion over the next thirty years. Andrew C. Weber, a former assistant secretary of defense and former director of the interagency body that oversees America’s nuclear arsenal, has criticized it as “unaffordable and unneeded.” After all, the U.S. government already has an estimated 7,200 nuclear weapons.

The nuclear weapons modernization program is particularly startling when set against President Obama’s April 2009 pledge to build a nuclear weapons-free world. Although this public commitment played a large part in his receipt of the Nobel Peace Prize that year, in succeeding years the administration’s action on this front declined precipitously. It did manage to secure a strategic arms reduction treaty (New START) with Russia in 2010 and issue a pledge that same year that the U.S. government would “not develop new nuclear warheads.” But, despite promises to bring the 1996 Comprehensive Test Ban Treaty to the Senate for ratification and to secure further nuclear arms agreements with Russia, nuclear disarmament efforts ground to a halt. Instead, plans for “nuclear modernization” began. The president’s 2016 State of the Union address contained not a word about nuclear disarmament, much less a nuclear weapons-free world.

Two formidable obstacles derailed the administration’s nuclear disarmament policy. At home, powerful forces moved decisively to perpetuate the U.S. nuclear weapons program: military contractors, the weapons labs, top military officers, and, especially, the Republican Party. Republican support for disarmament treaties was crucial, for a two-thirds vote of the U.S. Senate was required to ratify them. Thus, when the Republicans abandoned the nuclear arms control and disarmament approach of past GOP presidents and ferociously attacked the Obama administration for “weakness” or worse, the administration beat an ignominious retreat. To attract the backing of Republicans for the New START Treaty, it promised an upgraded U.S. nuclear weapons program.

Russia’s lack of interest in further nuclear disarmament agreements with the United States provided another key obstacle. With 93 percent of the world’s nuclear weapons in the arsenals of these two nations, a significant reduction in nuclear weapons hinged on Russia’s support for it. But, angered by the sharp decline of its power in world affairs, including NATO’s advance to its borders, the Russian government engaged in its own nuclear buildup and spurned U.S. disarmament proposals.

Despite these roadblocks, the Obama administration could renew the nuclear disarmament process. Developing better relations with Russia, for example by scrapping NATO’s provocative expansion plan, could smooth the path toward a Russian-American nuclear disarmament agreement. And this, in turn, would soften the objections of the lesser nuclear powers to reducing their own nuclear arsenals. If Republican opposition threatened ratification of a disarmament treaty, it could be bypassed through an informal U.S.-Russian agreement for parallel weapons reductions. Moreover, even without a bilateral agreement, the U.S. government could simply scrap large portions of its nuclear arsenal, as well as plans for modernization. Does a country really need thousands of nuclear weapons to deter a nuclear attack? Britain possesses only 215. And the vast majority of the world’s nations don’t possess any.

Given the terrible dangers and costs posed by nuclear weapons, isn’t it time to get back on the disarmament track?